How different in size is a keelboat and a longship?

In Ghosts of Saltmarsh, stats for Longships and Keelboats show that they are close to the same size if you measure length and width (70ft x 20ft and 60ft x 20ft, respectively), but are very different in terms of capacity. A keelboat can carry a total of 7 creatures and .5 tons of cargo, while the longship can carry 140 creatures and 10 tons of cargo.

Is height the main difference between the two ships? These stats lead me to believe there's a belowdecks for the longship that doesn't exist on a keelboat, however it's worth noting that other ships with multiple decks have that spelled out, whereas the longship does not. 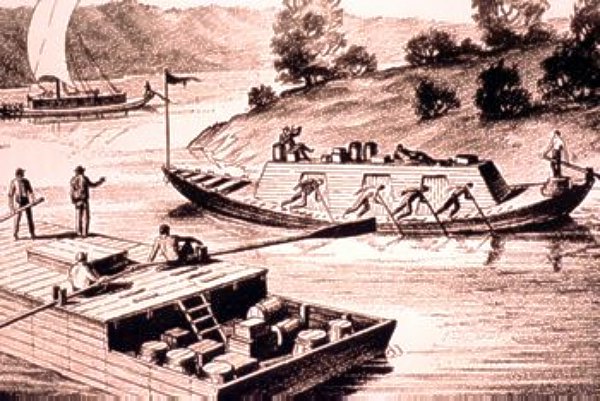 Keelboats were cargo-carrying cigar shaped riverine vessels; today the classification applies to certain types of recreational yacht. Keelboats do not have a lower deck but they could be enclosed with a roof such as the one shown above (keelboats at the top, flatboat [i.e. no keel] at the bottom). They were commonly used in 19th century North America. 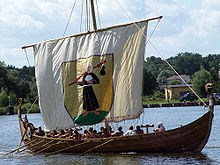 Longships were ocean-going vessels designed to carry warriors (of the Viking sort) to their destination and carry survivors, slaves and plunder away. They were not warships in the sense of ships designed to engage in naval combat but would today fulfill the role of troopships - at the time of their existence circa. 5th to 13th centuries naval combat was not a 'thing' in Europe anyway.

These also did not have a lower deck and were exposed to the elements without a roof. Notwithstanding, the Scandinavians used them to make voyages of very long distances including to Constantinople (modern day Istanbul) and Newfoundland.

WotC is simply wrong about the capacity of the keelboat. Lewis & Clark's keelboat was 55 feet long, 8 foot beam had 11 oars on each side (so 22 oarsmen) and carried 12 tons of cargo. Latter keelboats for use on the Mississippi carried up to 40 tons.

Not the answer you're looking for? Browse other questions tagged dnd-5e vehicles or ask your own question.

7
Strength check between medium size and large size
1
How does having less than required crew affect vessel performance?
13
Does Size Affect AC?
7
How much does a spaceship cost?
7
How to handle varying party size/players?
5
How do spaceships' Armor and Toughness work?
17
What's the difference between a cart and a wagon?
5
How does increasing in size affect adjacent squares and enemies?
1
Mount size calculations