Is it okay to roll multiple attacks that all have advantage in one cluster?

I am planning to make my first Ranger and going Hunter to eventually get Volley. If I get the preemptive strike from an unseen position, then RAW I get advantage on attack rolls.

Let's say I am moving stealthily through a forest and spot 6 orcs marching down in a caravan, all within 10 ft of each other. I need to make 6 attack rolls, all with advantage.

Because of the advantage do I need to do them one by one (or use pairs of color coded dice)? Or is it considered fair to roll 12 x d20 at once, then take the highest 6 rolls?

Rolling 12d20 and taking the 6 highest is not equivalent

Taking the 6 highest rolls out of 12d20 is not equivalent to 6 attacks with advantage. It is significantly better. I could lay out the probability argument, but it's easier to cherry-pick an example that demonstrates the difference. Let's say you roll your 6 attacks with advantage. On the first 3 attacks, you roll double 1s. On the last 3 attacks, you roll double 20s. That means that 3 out of 6 attacks hit. If you instead pooled those 12 rolls all together and took the 6 highest, all 6 attacks would hit, because you rolled 6 20s. With a little work, it's not too hard to show that taking the top 6 dice is always guaranteed to give a result at least as good as rolling with advantage normally, and will usually give a better result (i.e. more hits and/or more crits).

To make it fast and fair: decide before rolling how to pair the dice

Obviously, it would be nice to resolve all 6 attacks at once with a single roll of 12d20, and you can do so in a fair way, even with 12 identical dice, by defining a rule ahead of time that dictates how you will pair up the dice. A simple rule is to pair the dice up from left to right. Roll all the dice, then take the two leftmost dice and pair them up. Then the next two leftmost after that, and so on, until you have 6 pairs. Finally, once you have paired up the dice, start resolving attacks. Make sure to tell the DM what rule you are using so they can check that you are following it instead of cherry-picking pairs.

I would say, if I was DM, that you would have to use separate rolls or some differentiation of dice pairs.

If you did this roll in a group of undifferentiated dice, you could pick the lower of the two dice intended for your attack roll against Orc A and instead use it on Orc B, when your two attack rolls against B were both lower than that value (and might otherwise have caused you to miss B). This would be essentially cheating, like changing the face-up face of the dice by sleight of hand after the dice stopped rolling.

In other words no, it would not be "fair".

I used python to do 100 million rolls of each variant. The results are without modifiers, with critical misses, and with crits counting 1.5x (labeled "w/crits") against ACs from 1-20. The results are surprisingly close to one another with less than 3% more natural 20s.

Here is a plot of the average number of hits for Pooled vs. Standard (w/crits): 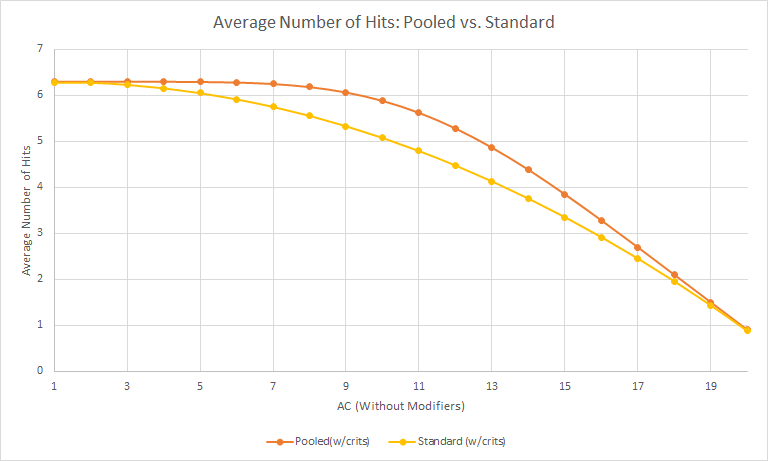 Here is a plot of how many more hits pooled gets you vs standard: 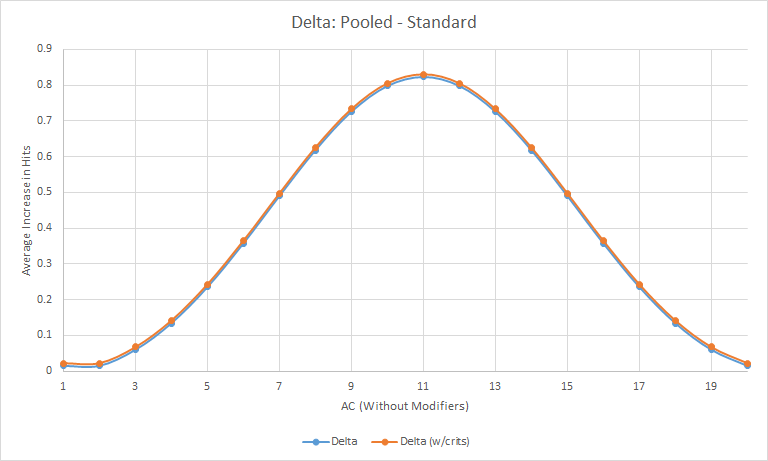 Note, the earlier version of this table was generated with a script that rolled dice with values from 1-21, not 1-20.

Not the answer you're looking for? Browse other questions tagged dnd-5e statistics advantage-and-disadvantage attack-roll or ask your own question.

18
Do you have advantage when multiple sources give advantage and only one gives disadvantage?
4
Help me ensure I have a proper grasp of Hiding and Stealth as it applies to the UA Ranger
8
Can you Hide from some but not all enemies?
17
If you have dis/advantage on a roll, do you have dis/advantage on a reroll?
5
Is the ranged attack bonus +27 for a maxed out 20th level archery-styled Hunter with applicable RAW magic items?
3
If I have multiple attacks, does the penalty from Combat Expertise apply to all attacks?
12
How high can the bonus to an attack roll get?