What kind of anatomy does a centaur have?

My friend showed me a D&D meme about centaurs (see below). This got me wondering if centaurs also having two sets of lungs, two livers, two hearts (like a Time Lord?), and so on, or if centaurs just have a more efficient humanlike arrangement of organs, or if they've another arrangement entirely.

What's the anatomy of a centaur according to official D&D lore? Is it like a human, a horse, both, or a combination? I'm not looking for physical limitations, but how centaurs are composed anatomically. 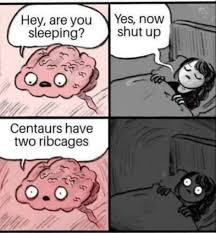 There are some descriptions in official lore, but nothing really showing the actual anatomy. There is, however, an article in Dragon Magazine #103, describing (But not showing) the anatomy.

Rules Cyclopedia (1991) gives the following description (and this description is repeated in several sources):

A centaur is a creature with the head, arms, and upper body of a man joined to the body and legs of a horse. They are of average human intelligence and often carry weapons (clubs, lances, and bows; one weapon per creature). A centaur may use a charge attack with a lance.

Dragon Magazine #103 has an article titled "The Centaur Papers" that has a full page on anatomy, the pertinent parts are here:

Centaurs have two hearts, one in the upper body and one in the lower. Each is about three times the size of a human heart, and they beat together in a slow but powerful rhythm. There is also a pair of lungs in each chest cavity, though the lower pair is mostly a bellows for the peculiar but efficient upper respiratory system. The chests of a centaur expand and contract in unison. The overall construction of the centaur body is such that it is less vulnerable to injury than that of a human. Most of the major organs, such as those of the digestive system, are carried underneath the lower torso, where they are less easily reached by an enemy and well protected by less vital tissues. Many, such as the liver and kidneys, are proportionally smaller than in humans (as is common in larger creatures), and are therefore less likely to be hit. The area that appears to correspond to the vulnerable human abdomen is mostly composed of fat and muscle, with equivalents of the human windpipe, jugular vein, and such buried deep within it.

One sentence states that the equine portion also houses the reproductive organs:

Not the answer you're looking for? Browse other questions tagged dungeons-and-dragons lore races centaur .

10
How to be a Centaur PC?
4
Can a centaur use a saddle pack?
48
Does the UA Centaur stack actually work?
4
Is there an official Centaur race for PCs in Pathfinder?
20
What would happen if a Centaur Oath of the Ancients Paladin used Turn the Faithless?
10
How do the rules work for a centaur being a mount?
15
Does a centaur PC also count as being mounted?
25
Which centaur is more 'official'?
8
What humanoid or monster races have a matriarchal society?
5
Can a Centaur player character carry a Medium-sized creature?