What brand and style is this D20?

I've had this one die for nearly 30 years, and I just started sorting and displaying my collection so I'm trying to find out which brand/style it is so I can hopefully complete the set someday. I thought it might have been the Chessex run of speckled dice, but the colors don't match anything else. The closest I've come to a match has either pink, blue, or green numbering, but mine is white.

Does anyone know? Searches for "red blue speckled dice" turn up bupkus. (I've now searched eBay, most well-known dice seller shops online, and the dice collector's page with reference photos, all turning up nothing.)

I thought it might be one of the Veronica Chessex dice, but the speckling seems broader than the Chessex varieties. Also, the font and the white numbering likely means it's not one of those either. It's also not from a card or board game, to my knowledge. I'm pretty sure I picked it up as a single at an old RPG shop back in the day.

Per the comments: Yes, the 1 is opposite the 20. There are no symbols, only numbers. I've added an image of the 20 face as well. 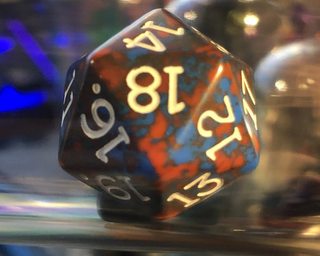 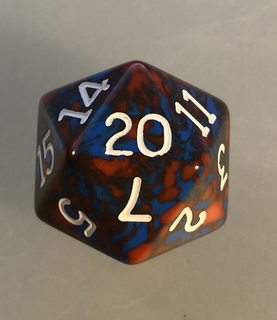 That's an old Torg die that came in the Torg starter set back in the day. You won't find a full polyhedral set though.

Not the answer you're looking for? Browse other questions tagged dice product-identification .

3
What is this fantasy system where you roll d10s and find matches and runs?
14
What RPG converted "choose your own adventure"–style gamebooks into adventure modules?
11
Is this die from an RPG?
2
What's the name of this dice set with blue letters on red-and-black?
23
What game uses six-sided dice with symbols as well as numbers on the 5 and 6 faces and a blank space where “1” should be?
15
What game uses dice with compass point arrows, forbidden signs, explosions, arrows and targeting reticles?
16
What game uses dice with engraved faces, weapon symbols, double weapon symbols and object symbols?
28
What game uses yellow 20-sided dice with letters and arrows?
12
What were these CYOA-style books?