How many spears can fit in one pincushion

In The Riddle of Steel on page 77 it notes that the maximum number of combatants that can surround a single opponent is three, except "groups of spearmen and the like, who may gather tightly together and thrust". The text nowhere mentions a limit to the number of spear-or-similar armed opponents who can surround one person.

How many spear-fighters can effectively attack a human-sized target at once? Failing a RAW-based answer, an answer based on historical accounts of the reality of spear fighting would certainly be in the spirit of the game.

I would say that it depends on the length of the spear. A unit using sarisa would be far more formidable than a unit using Hasta. Halberds would be in the middle but are used quiet differently from spears. Pikes again would be formidable to face as a single fighter against a unit. If said fighter was surrounded, the situation is even worst.

Technically, you could have any number of spheres (or an ovoid for more precision) of spears. From that point of view, the tip of the spear is the limiting factor. Those all need is an approximation of the dimensions of the target (minus 3/5 cm to allow for lethal penetration of each tip). This would depend on the shape of the tip, and how tightly you could pack them -- round tips are worst in this regard than square ones. This would massively increase the amount of fighters utterly surrounding the lone wolf.

Note 1: I would give a small penalty to the surrounding fighters as they are going to hinder each other a little (depending on training) but the final result is still going to be same: dead lone wolf.

Note 2: Combat in more than 3-dimensions is left as an exercise to the reader.

How many spear-fighters can effectively attack a human-sized target at once?

More than it takes to kill any human-sized target that can be killed with spears at all.

Historically, spears were used either as (short) distance weapons, as a protection against cavalry charges, or in formations such as the Phalanx, where keeping the formation's (usually linear) shape was of paramount importance.

Historically a single spear thrust normally took down an unarmored foe, but in cases where a lot of spears were involved – i.e. a Phalanx – up to 4 or 5 guys could be spearing the same opponent simultaneously. This could of course increase should the foe be mounted; I have read, albeit in a fictional novel, that a horseman can be speared by a dozen men at one time.

Of course trying to thrust a spear when you have a warrior either side of you huddling around the same target would hinder your aim, strength and probably stability as Sadathrion said.

In LARP I've only ever seen 4 or 5 people effectively attack the same player. Anything past that and weapons start striking each other or the players start to get in each other's way.

25 short spears. But the answer also depends on the training of the spearmen.

(excellent answers from the other contributors)

You can assume that any competently trained spearmen - ranging from the town guard to the Roman legions - have specific training in maneuvers to hem in, drive, corner, capture or execute any [correct smaller] number of enemy. 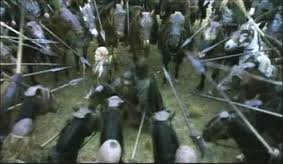 About 18 trained horsemen surround 3 captives, and draw their spears on command. Ostensibly this maneuver was practiced routinely by this set of soldiers. They are not in much danger of hitting each other as they thrust forward.

In TROS none of these spears have to do lethal damage to execute the captives; a few merely need to deal some damage. As stated elsewhere here, the individual captive's defense pool is divided and a portion is assigned to each immediate attacker. Once hit, the captives' dice pools (for both attack and defense) drain away quickly, leaving them exposed to some attackers. On successive rounds the captives may be gradually ventilated and safely skewered.

But that is all based on game theory and a movie still. Let's now talk "real world" and "short spear" in this example: 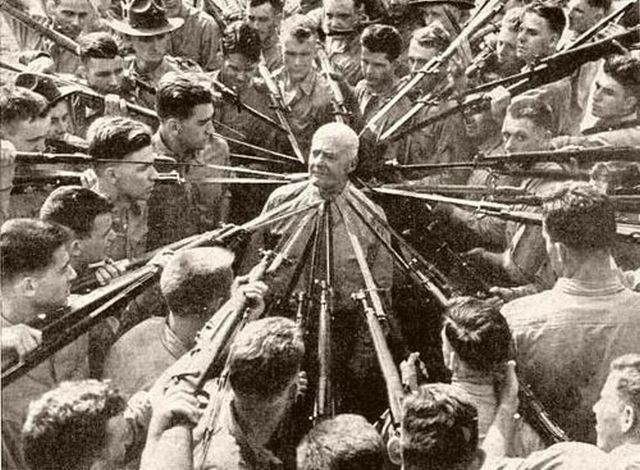 I count 25 bayonets at shoulder/neck level, with at least 4 more out-of-range but ready. These soldiers also have had adequate training with the bayonet: they know what they are doing; they are not at risk of harming each other with 25 jabs forward.

Not the answer you're looking for? Browse other questions tagged combat the-riddle-of-steel .

53
How can I reward a character that doesn't want magic items?

12
How many rays can a beholder use in one full-attack action?
6
How many things can a player do on his or her round?
5
How can I handle one-on-one duels in a satisfying way?
2
How many attacks does a Horde get per turn
9
Can I move to retrieve thrown weapons (Spears/Javelins) in combat?
4
In 13th Age, how many attacks of opportunity can a character make in one round?
19
How many weapons can I place on a ship?
3
How many psy powers can a psyker use each round of combat?
8
How can I fit infiltration-style encounters or quests into the combat framework of D&D 5e?