How does a party navigate while flying?

I want to start a Tomb of Annihilation campaign in 5e. I will be the DM. There's a part in the module where the PCs can fly.

the party becomes blessed by a priest in the mountains and they gain the ability to fly for 3 days.

ToA doesn't seem to cover the rules concerning navigation in this respect.

I spent a lot of years as a pilot, and some years teaching people to fly. I also play D&D, various editions. Our party with me as the Ranger spent quite a few sessions navigating on the ground in Chult. We eventually got

a map from one of the merchant princes

While that made some of what I did easier, since I could climb to the top of the mountains nearby and use landmarks to get a better idea for where we were ... sometimes ... there were constraints on my mapping / navigating due to jungle, night, and weather.

If your PCs can get a map before they fly ...

... that's a huge bonus. They can fill in the blank spots as they go from hex to hex.

Guidelines for applying this

As you say there are no airtight rules on this, so you as the DM need to arrive at what feels right for you.

What I've seen used effectively in the past: landmark to landmark navigation. Just as pilots had to do before nautical charts became common, visual flying from landmark to landmark (bend in a river, road, hill, a particular mountain peak, a tower, large cultivated area, lake, town, etc) was how pilots found their way. Your flying party is doing some primitive aerial navigation.

They don't have an aeronautical chart

To a certain extent, your players are learning how to make an aeronautical chart, on the fly (pun intended), so they probably need to arrive at how they will keep track of what they have found while flying. Assign that to them as a project: they may surprise you with what they come up with. Also, have them describe to you how they figure out which way is north. If one of them has the Keen Mind feat it is easier ...(excerpts) ...

... but if they don't, ask them to describe to how they do it. (Sun position, knowing "that volcano is east of us", stuff like that)

Because your PCs can fly, that completely changes how the PCs see and experience the world, just as being able to fly changes how you can visualize and appreciate how the world looks when you are 8,000 feet up and looking at the world below you - on a clear day. In a rain storm, it all looks gray and wet! That new perspective takes some getting used to. It's not obvious the first time you do it. Being up there does makes matching what's on a map to what you see different than ground based navigation. But if they don't have a ground map, they need to make their own map.

They can see for miles, but not at night or in bad weather.

As long as the characters can fly, they can get the bird's eye view of the world. There are a variety of formulae to determine line of sight, but with Chult's grid / hex layout in ToA, I'd recommend that you either "reveal one hex at a time" for the sake of simplicity, or, reveal the current hex, and each hex adjacent to it, if you want more verisimilitude. (On a clear day, a 10-15 mile radius to "see" isn't unrealistic). 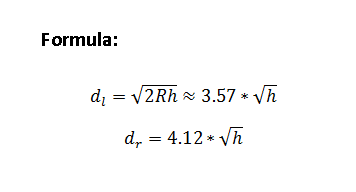 From 8,000 feet up, you can on a clear day "see" over 100 miles away, for example, but practically in terms of the detail that you can make out, I've found that about 10-20 miles is the limit for the human eye unless the terrain feature is huge, like Mount Ranier or the coast line of the Pacific Ocean or Lake Michigan.

Speed and thus the rate at which the map is revealed.

Use the movement rates in the PHB, but use "fast" since there is basically no resistance to their movement by terrain. 30 miles per day. (PHB p. 182) That's three hexes per day, with the adjacent hexes revealed ... but in Chult, it's mostly jungle.

Chult is covered in jungle, and I've some experience with flying over triple canopy jungle. Some of the landmarks on the map will be obscured by the cover, like ...

... while others, like the city of Omu, will be easily visible from a long distance off if the party are high enough up in the air. Rivers and beaches will stand out, but some rivers may need to be flown over directly (in terms of being in the local hex) rather than being detected at slant range. (You'll need to rule on a case by case basis for that).

It's dark at night and rain showers obstruct vision

Environmental factors that limit how far they can see, and thus navigate.

How we did it in a previous edition, on the back of wyverns

The DM did not give us a map. We went from one prominent landmark to another, and had to make a rough map (sketched in pencil with distance estimated) and we had to estimate our direction of flight (as related to north) to get an idea of where we were. It was not a great map, but it allowed us to orient ourselves.

I'm currently DMing ToA, here is how I've handled this:

If characters are flying, I would allow them to discover their adjacent hexes, also allowing them to choose their next step. Beside the speed, the greatest advantage of flying is not getting lost in my opinion.

Forced March. The Travel Pace table assumes that characters travel for 8 hours in day. They can push on beyond that limit, at the risk of exhaustion.

My players usually always pushed until 1st level of exhaustion, as they know they will rest right after.

I don't use the "Slow/Fast pace" rules for flying, as it doesn't make sense to have advantage/disadvantage on perception/sneak while seeing everything from the sky.

Not the answer you're looking for? Browse other questions tagged dnd-5e published-adventures flight travel tomb-of-annihilation or ask your own question.