When are the seasons in the Forgotten Realms calendar?

I'm planning on starting to run Waterdeep: Dragon Heist soon, and part of the premise is that since the city looks and feels different in different seasons (people are less likely to be milling about in the Winter, for instance), one should select a season that the adventure starts in.

When I take notes as DM, I like to track what is happening on which in-game day, so that as time passes I can tell when the holidays fall and just generally what's happening in the rest of the world while the adventurers are doing things.

Waterdeep, being in the Forgotten Realms, uses the Calendar of Harptos described in the DMG on p. 33 and in the Waterdeep: Dragon Heist book on p. 7. What I can't seem to find, though, is this: When do the seasons take place on the calendar?

Both those references say that the months "roughly correspond to the months of the Gregorian calendar". And well, it's a 365¼-day (on average) calendar, so that makes sense. So does that mean, that Spring, say, is from roughly the 21st day of Ches (the 3rd month) to the 21st day of Kythorn (the 6th month)? (This is assuming, of course, that Waterdeep is in "the North" and thus uses Earth's Northern hemisphere naming of seasons?) Given that there's a holiday named Midsummer after the 7th month, this seems like it would roughly make sense (at least if all of the population using this calendar follows Northern hemisphere naming).

I know that it won't really have any impact on our table's story, but I'd like to know when the seasons take place "officially" so I can pick when this adventure should start.

At the end of the Second Sundering, the traditional days of season changing shifted. The Sword Coast Adventurer's Guide has the details (pg. 15):

The worlds of Abeir and Toril drifted apart in 1487 and 1488 DR. In some places this change was accompanied by cataclysm, while in others the shift went without notice. Astronomers and navigators who closely watched the stars couldn't fail to see that there were nights when they seemed to hang in the sky. The winter of 1487–1488 lasted longer than normal. It was then noted that the solstices and equinoxes had somehow shifted, beginning with the spring equinox falling on Greengrass of 1488 DR. The seasons followed suit, with each starting later and ending later.

This shift in seasons has caused some sages, and the priests of Chauntea, to consider changing the marking of some of the annual feast days, but most folk counsel patience, believing that the seasons will fall back to their previous cycle over the coming years.

If you, as the DM, want to use the old equinoxes and solstices to mark the seasons changing, you can look at the Forgotten Realms Campaign Setting from the 3.X edition of D&D, which includes the following image: 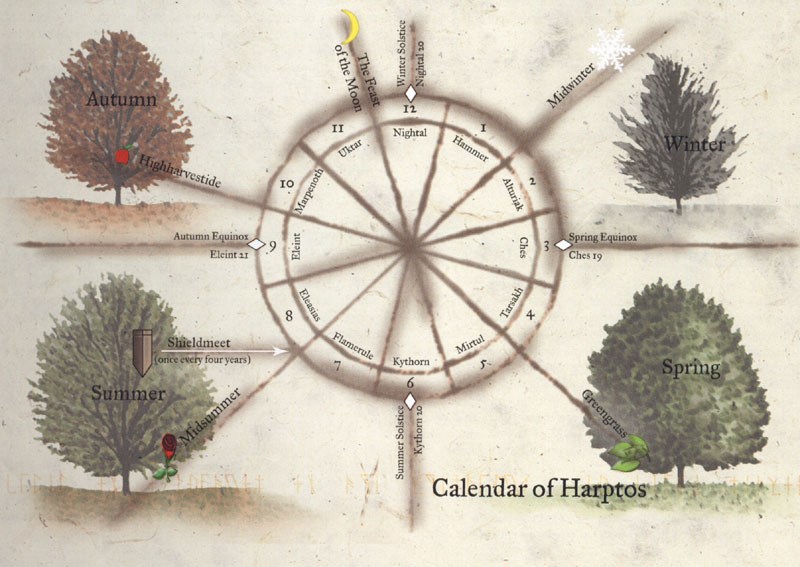 You can find detailed information about the calendar of Harptos on the FR wiki, which even has a nice picture depicting when the seasons used to start for all the past editions of D&D:

Yet in the 5e, following the Second Sundering, about a 40-day shift has happened, as mentioned in the answer by Kuerten. Whether this shift will be permanent or not remains to be seen. A Forgotten Realms Style Guide, distributed by Wizards of the Coast to official play writers, is available on the DM's Guild (a copy of which you can download for free here), and it aligns the month of Hammer with Earth's December, while in all the earlier-edition materials Hammer was January. By the way, it is also worth noting that there has been some controversy on this issue as described in the Candlekeep forums in the beginning of this year (2019).

Regarding the climate in Waterdeep, details can be found in the AD&D 2e boxed set The North: Guide to the Savage Frontier. In the book The Wilderness, Waterdeep is described as the roughly the latitude where the subartic climate ends, yet the warm ocean current keeps the weather warmer for the coast:

From the Spine to Waterdeep, subarctic weather is found. The coastal areas as far north as Port Llast are temperate climates, due to the warm ocean currents running along the coast.

The majority of the North, including the islands and the Spine of the World, fall in a subarctic clime. Long, bitter winters typically last from mid Marpenoth to late Tarsakh, with temperatures dropping to -30° F and rarely climbing past 40° F.

True temperate climate begins south of Waterdeep, yet the coast between the City of Splendors and Port Llast stays warmer and wetter throughout the year than inland regions. ... Summers are warmer here, with temperatures reaching 100° F or higher, but are relieved by nearly constant sea breezes.

Please note that the data in these sentences are based on the old version of the calendar, so apply a 40 day shift as you see fit.