How much on average does the Durable feat increase the number of Hit Points gained when spending Hit Dice?

There are other similarly mathy questions on this site such as "How much damage does Great Weapon Fighting add on average?" and "Are features that allow −5 to attack to get +10 to damage mathematically sound?" but I was wondering how the math pans out with the Durable Feat.

When you roll a Hit Die to regain hit points, the minimum number of hit points you regain from the roll equals twice your Constitution modifier (minimum of 2).

There are two interpretations for how the Durable feat could work "How does the Durable feat work?", but for the purposes of this question I would like you to assume that "the roll" refers to the total of the die's result and the Constitution modifier.

As the answers there explain, this means the feat is useless to those with a Constitution modifier of +1 but it prevents the alternative interpretation's unusual case of a d6 Hit Die class with a +5 Constitution modifier gaining 15 Hit Points from spending a Hit Die whereas their normal maximum is 11.

This is also shown to be the intended way for the feat to work (thank to user @Rykara for finding this) as Jeremy Crawford has made this tweet:

How much does this feat increase the average Hit Point gained when spending Hit Dice?

The feat always benefits smaller hit dice more, but by how much depends on your Constitution modifier. The average increase is 0.60454545 Hit Points.

I'll first present the math/formulas, then the raw numerical results and then the more natural English generalizations with a graph. (you can scroll down to go straight to the results).

The section on "Short Rest" states:

For each Hit Die spent in this way, the player rolls the die and adds the character's Constitution modifier to it. The character regains hit points equal to the total (minimum of 0).

And the Durable Feat states:

When you roll a Hit Die to regain hit points, the minimum number of hit points you regain from the roll equals twice your Constitution modifier (minimum of 2).

This increases our minimum to the higher of double our Constitution modifier (unless our modifier is zero or less in which case the minimum is 2).
Because of the negative modifiers there are actually two separate formulas we will have to use:

Using the Durable Feat our new possible Hit Point gains would be:
2, 2, 2, 2, 2, 3.
The new minimum is two, so we have increased every result that was less than 2. In particular, all of the zeroes are replaced by twos and the single result of one that we had is also replaced by a two.
Thus we have increased the total by 2 times our negative Constitution modifier plus 1: -2MOD+1.

Dividing this by the number of results (as they are all equally likely) will get us our average increase from the feat, (HD represent the size of our Hit Die):
(-2MOD+1)/HD.

Dividing this by the number of results (as they are all equally likely) will get us our average increase from the feat, (HD represent the size of our Hit Die):
(MOD-1)(MOD)/(2HD).

I had a python script run these formulas over the range of hit die sizes (from d6 to d12) and constitution modifier values (from -5 to +5) and got the following results:

There is also the notable case of a level 20 Barbarian as their Constitution modifier can reach +7 on their d12 Hit Die. For them the feat increases the average by 1.75 Hit Points.

The feat benefits the a negative modifier more than its positive counterpart, but this is because the feat provides no increase for any dice if you have a +1 modifier:

The x-axis is your modifier, the y-axis is the gain from the feat. The smaller hit dice have the higher benefits.
Purple is the d6, Green is the d8, Blue is the d10, and Red is the d12. 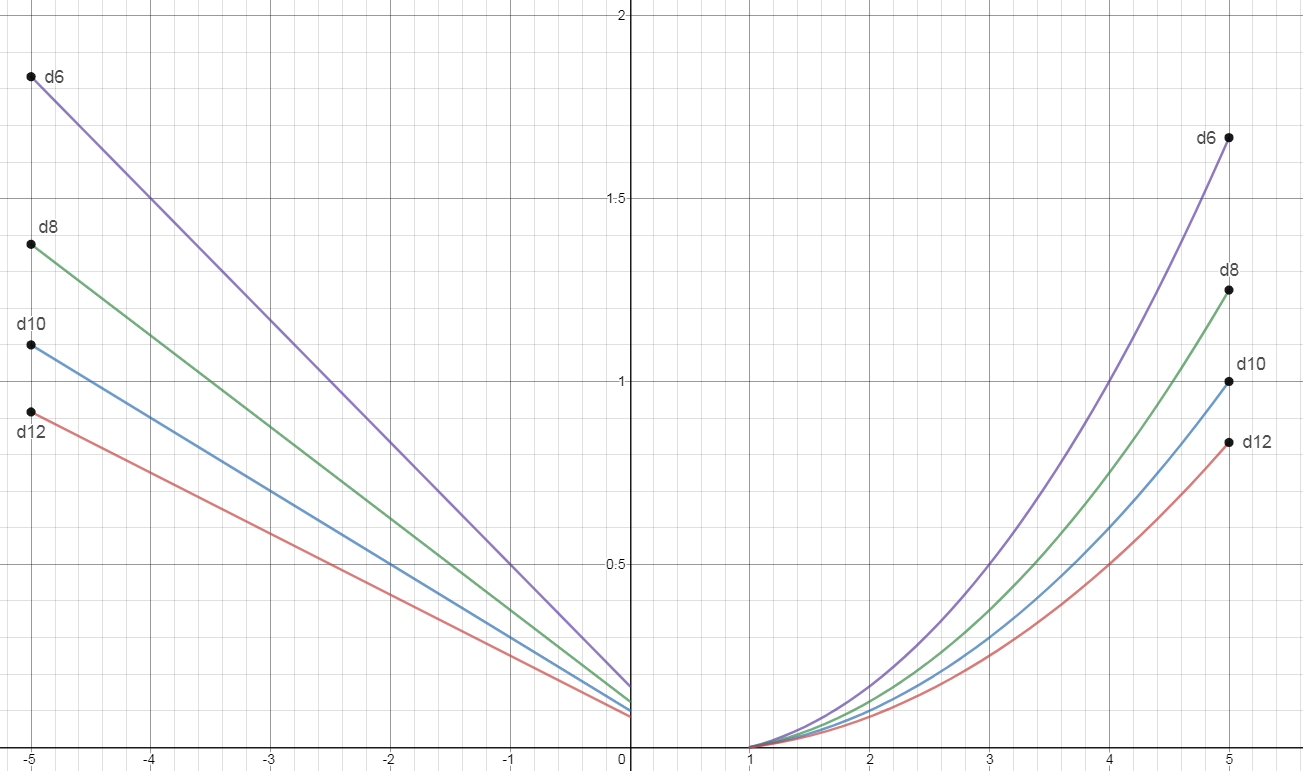 Just to complement Medix2's answer, here's an AnyDice program to calculate the advantage given by the Durable feat:

The function takes a number rolled on the hit die (ROLL) and a Constitution modifier (MOD) and returns the difference between the amount of hit points you would get with the Durable feat and without it. The rest of the code just loops it over various possible hit die sizes and Constitution modifiers.

The default output is kind of verbose, so I used a Python program to parse the AnyDice summary output into a CSV file, imported it into Google Sheets and made a nice chart of it: 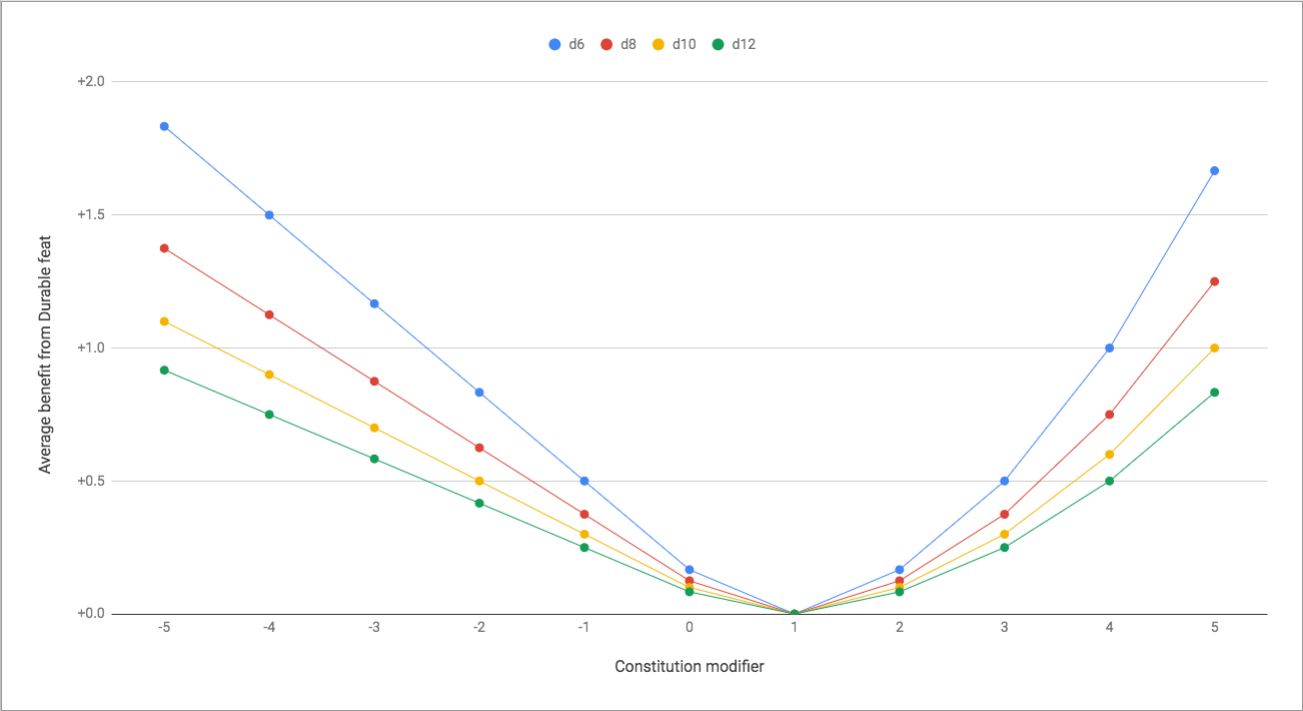 As you can see, it matches the values calculated by Medix2.

Meanwhile, for Constitution modifiers above +1, the feat effectively changes the hit point gain from MOD + dHIT to MOD + (lowest of MOD and dHIT). In this case the benefit grows quadratically with the modifier, since both the minimum hit point gain and the fraction of rolls to which the minimum applies change with the modifier. (The scaling would become linear again if the Constitution modifier exceeded the maximum number on the hit die, but I'm not sure if that can even happen.)

And, of course, if your Constitution modifier is exactly +1 then the feat is totally useless, since you're already getting at least 2 HP per HD and the feat doesn't change that. :/

Not the answer you're looking for? Browse other questions tagged dnd-5e feats statistics hit-points hit-dice .

61
How much damage does Great Weapon Fighting add on average?
57
Are features that allow −5 to attack to get +10 to damage mathematically sound?
36
How does the Durable feat work?
8
How can I generate a heat map from AnyDice results?

16
Does the Sleep spell use current or maximum hit points?
36
How does the Durable feat work?
12
Does the Durable feat improve the Constitution score of a druid in Wild Shape?
14
How does the optional Healing Surge rule interact with other uses of hit dice?
11
How much do you heal from Hit Dice with Primal Champion + Durable + Con 24?
18
Does a Druid using Wild Shape roll for hit points or take the average?
6
How can I calculate the expected number of stunt points per attack?
8
How do the Durable and Dwarven Fortitude feats interact?
5
What features, items, or spells allow dodging as a bonus action other than Monk's Patient Defense?
5
How would optional re-rolling of all hit dice on leveling up affect average hp?