Faerûn: Why is there a gap in the Trade Way?

In Sword Coast Adventurer's Guide, Mike Schley's map shows a series of gaps in the Trade Way/Coast Way between Waterdeep, Baldur's Gate, Sconubel, and points east. The version available for free on the Wizards of the Coast website shows the gap: 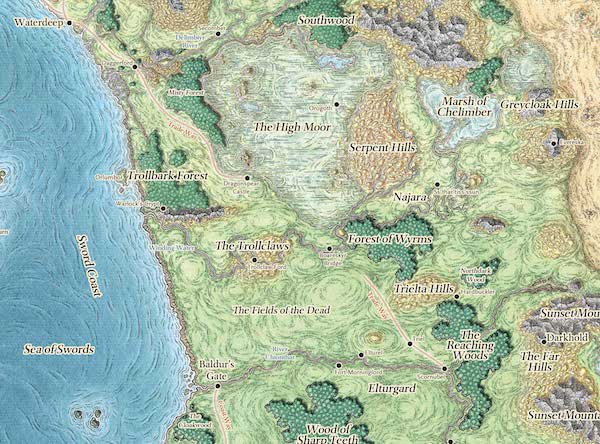 I figured the interrupted road between Scornubel and Dragonspear Castle at least was a misprint, but subsequent versions of the same map show the same discontinuity. The version currently for sale on Mike Schley's website has been updated for Storm King's Thunder, with all of the roads redrawn. However, the gap persists. 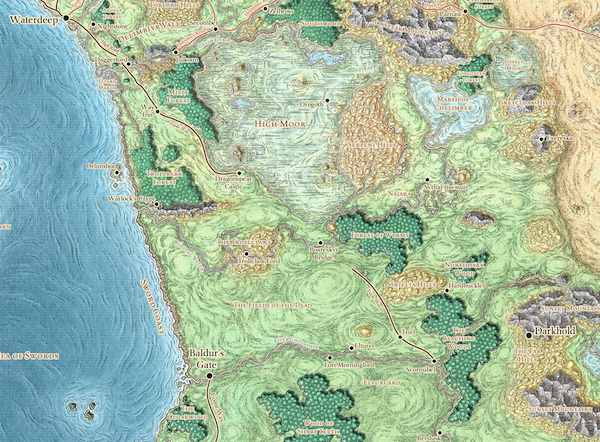 Descent into Avernus implies that there is a road continuing north from Baldur's Gate, though it could be interpreted to refer to the stretch of the Trade Way that resumes farther north.

With trade ways running north and south along the Sword Coast, a port on the Sea of Swords, and the Chionthar River leading inland, Baldur’s Gate is perfectly situated for its role as a commercial hub.

The map showing the immediate environs of Baldur's Gate remains consistent with previous editions, although in this the road makes it as far north as Boareskyr Bridge before terminating. 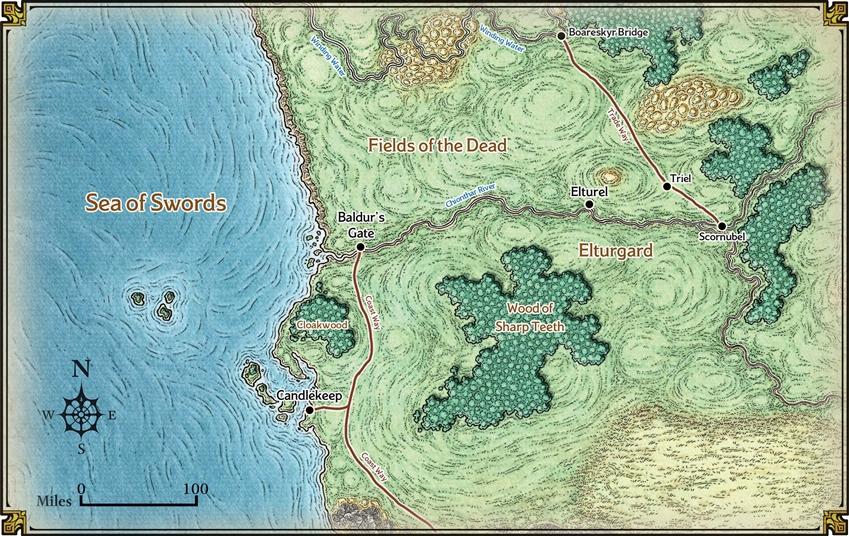 Is there a canonical reason for this? Does all trade between Baldur's Gate and Waterdeep take place by water? Or is this still a misprint? The Forgotten Realms Wikia shows no such interruption, but it tends to have a heavier focus on earlier editions.

The "broken" Trade Way is a symptom of the maps being drawn and redrawn too many times over the editions, and a lack of careful cartographic referencing far enough back when redrawing them. Like a game of Broken Telephone, the deterioration of the Trade Way's depiction (as opposed to its in-world state) can be traced through lapses in mapping between the editions.

For some reason, in 3rd edition both the Trade Way and the Coast Way are marked the whole way as "road" with no "trail" sections in the Fields of the Dead, despite no corresponding change in the conditions in-world, and despite some trails being marked right beside them. However, the 3e map is not a good map. While the 1e and 2e maps closely track each other, the 3e map was notable at the time for being much prettier while grossly distorting most details of the geography of the Realms. (The Fields of the Dead in particular shrank by more than half, moving Baldur's Gate much farther north than it should be and warping the shape of the Coast Way, and the things the cartographer did to Cormyr, the Dalelands, and the rest of the original "core" lands of the Realms is enough to make a map-lover cry.)

Notably, the 4e map tracks with the 3e map, and shows the Trade and Coast Ways as fully "road" (and intact) along their whole length. That rules out 4e-era catastrophes and cataclysms as being in-world responsible for the addition of real gaps.

It turns out that the lack of these parts of the Ways on the 5e maps seems to be a fault of the cartographer going back far enough, but to the wrong maps. The first time that gaps were mapped in the Ways was actually in the 1e maps — in the continental-scale maps. These maps only marked the "road" portions of the two Ways, leaving depicting things like trails to the detailed regional maps. It is this continental-scale view of the Fields of the Dead that the 5e maps appear to be based on — even the zoomed in region around Baldur's Gate, which really should have been based on one of the regional-scale maps instead of on a continental-scale map, if the effort to reference 1e maps was being made anyway.

(Aside, the 5e map around Baldur's Gate restores the Fields of the Dead and environs to their proper size and shape. That's nice to see, though it does make it doubly confusing why the mapping lapses in the Ways at that scale weren't also corrected.)

So that's all that's going on: The 5e map just doesn't chart any routes categorised as "trails", probably because it was based on a map that didn't mark them either, so it looks like the Trade Way and Coast Way are broken. With no depiction on even the more detailed maps, it makes it seem to someone coming to the Realms for the first time in 5e like it's a deliberate break rather than just a failure to mark them. And because these maps are not being presented alongside a detailed almanac of the Realms, as the original maps were, there's little beyond the map for a reader to draw conclusions from.

The Ways are there, though. The maps are just not showing the parts of the Ways that are rougher, that are passing through the region of sparse civilisation that is the Fields of the Dead.

The Hoard of the Dragon Queen adventure includes a chapter where the party is expected to join a merchant caravan heading from Baldur's Gate to Waterdeep. To answer part of the question, we know that Merchants are traversing the "broken section" of the trade road, rather than going exclusively by boat. The adventure does not give any insight into why that section of road is broken on the map.

The most difficult part of the journey is near the beginning. A few days’ travel north of Baldur’s Gate brings the caravan into a countryside known as the Fields of the Dead. The road twists and wanders through hills dotted with ancient battlefields, dolmens, and barrow mounds. Common wisdom holds that it’s a very bad idea to light a fire on a hilltop at night in the Fields of the Dead, because the light attracts monsters from miles around. Crossing this territory takes several days, during which everyone will be edgy and on watch.

The gap is an error in the cartography, nothing more.

I hate to answer my own question despite receiving some very well-researched responses, but the smoking gun is indeed in Hoard of the Dragon Queen – not in the text, but in the map. That book was published prior to Mike Schley's otherwise-delightful map of the Sword Coast, and includes a different map of the region. In that map, presumably contemporaneous in-universe to Mike Schley's, the Trade Way and Coast Way bifurcate just south of Dragonspear (Castle), with the Trade Way continuing south to Scornubel and the Coast Way to Baldur's Gate and Candlekeep. 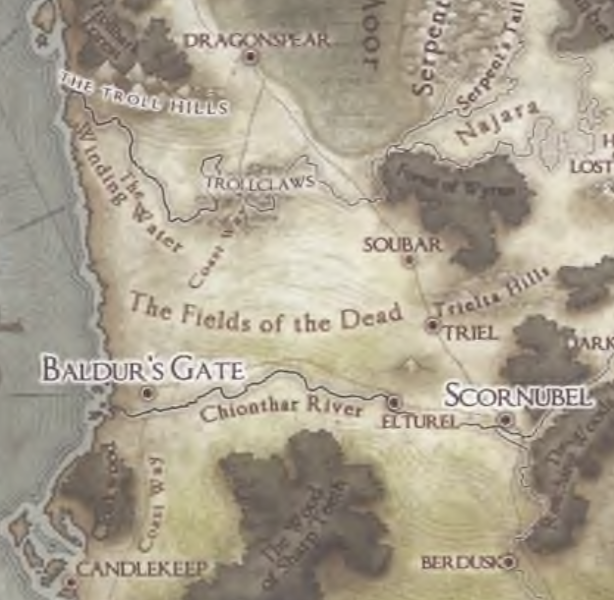 This makes much more sense from a world-building standpoint, and absent any information to the contrary, I'm going to run my games based on the assumption that the termination of the Coast Way at Baldur's Gate is a cartographer's error or possible trap street.

The map is reproduced unchanged in the recent (and amended) Tyranny of Dragons compilation.

There are references in the Sword Coast Adventurer's Guide that describe the land being shifted, and transformed (in some cases) to pre-Spellplague formations (under "The Second Sundering", on page 18) which may give a future reason:

Early in 1487, earthquakes and volcanic eruptions abounded for months, as if the whole world was convulsing. Rumors spread of chasms caused by the Spellplague suddenly vanishing, and stories circulated of known destinations being farther away from one another, as if the world had quietly added miles of wilderness to the distance between them. Word began to spread of places and peoples not heard from since the Spellplague.

On all maps, accounting for the fudge factor on map scales drawn and held to the screen, the distance from Waterdeep to the Boareskyr bridge appears consistent. The one thing that is apparent is the differences in the geography for the 4e map, which shows several new features not found on other maps (that I saw) such as the Deep Maw (Just east of the Far Forest, which shows as the Frozen Sea on the SCAG 5e map), and other items omitted (Such as Dragonspear Castle, which does not show on the 4e map).

However, in every edition map that I looked at, the Trade Way tracing is unbroken. This is the first time it appears unbroken, and despite the above passage, the distances between major landmarks in that path appear consistent.

I don't think it's actually a cartography error. If you look at Ed Greenwood's original, hand-drawn map of the region, you can see that all through that region, the roads are marked not with strong lines, but with light dots.

I read that as indicating that the roads through here are rarely traveled, poorly maintained, and dangerous. They're not even true "roads" as we would think of it, so much as barely marked tracks through dangerous wilderness.

It's interesting to think about what that means for the setting. This is presumably an area where the "Trade Way" loses some of its cohesion. I would assume that means that it is safer (but probably more expensive) to travel by sea between Baldur's Gate and Waterdeep than by land. I would also assume you probably can't find much by way of towns or safe inns around Dragonspear and the Trollclaws, and playing all this up would make a land journey through this stretch of the Trade Way far more interesting.

5
Is there a map for the feywild equivalent of Faerûn?
17
When did Baldur's Gate's Outer City come to be?
3
Are there any official maps of the Netherese Empire?
2
Are there any official maps of the Seventon Alliance?
8
Is there a list of Faerûn equivalent of Christmas traditions?
8
What regular Faerûn-wide events are there?
11
Are there any Chosen left in Faerûn following the Second Sundering?
1
What information is there on the latitude of different countries/cities in the Forgotten Realms setting?