How do you calculate the range of an attack when attacking diagonally?

I was recently in a situation where I had to make a crossbow attack on an enemy that is in the opposite corner of the room from where I was. 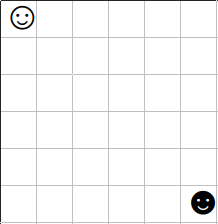 For the sake of simplicity, let's assume my weapon has a range of 25 feet, and that each square is 5 feet wide.

The PHB only states about the Range weapon property:

I know there is a rule for diagonal movement where your first diagonal square costs 5 feet, the second 10 feet, and so on... I don't know where this rule is written, I just heard it somewhere.

How is the range of an attack determined, by RAW?

Let's get one thing out of the way first: Playing on a grid is a variant to the normal rules. These variant rules can be found in the green insert/sidebar on page 192 of the Player's Handbook. To calculate range using these rules you count squares as though you were moving:

To determine the range on a grid between two things—whether creatures or objects—start counting squares from a square adjacent to one of them and stop counting in the space of the other one. Count by the shortest route.

In these rules diagonal squares are treated as 5 ft. apart.

To enter a square, you must have at least [5 feet] of movement left, even if the square is diagonally adjacent to the square you're in.

This rule "sacrifices realism for the sake of smooth play." The Dungeon Master's Guide (p. 252) includes the additional variant rule1 that every second diagonal counts as 5 additional feet.

Not the answer you're looking for? Browse other questions tagged dnd-5e ranged-attack battle-map or ask your own question.

3
How does the Ranger Whirlwind Attack feature compare to the Volley feature?
2
If the Cordon of arrows spell is cast and the target is within range when it's cast would it activate when they move?
13
Do the Hunter ranger's Horde Breaker and Volley features interact?
2
Do creature sizes change the range of an attack?
3
How are range increments calculated?
6
Combat using a grid and touch spells
4
Missing with a splash weapon
10
Question about vertical attack range from one character to another
7
Does using a crossbow with the Sharpshooter feat change its range in underwater combat?
23
Can the Fog Cloud spell effectively increase archer range by canceling disadvantage at long range?