Do aarakocra have arms as well as wings?

Earlier versions of D&D had illustrations in which aarakocra did not have both arms and wings. Instead, their hands were akin to those of bats, with fingers part way along their wings. Yet in 5e, the illustrations for aarakocra picture them with arms that are independent of their wings.

Nothing in the text I've seen adjudicates on this question, though I've only read what's in Elemental Evil Player's Companion.

The mechanical implication concerns whether aarakocra can attack with weapons (other than talons) while airborne. Or use a shield.

Answers to the shield question on this site seem to assume the independence of arms and wings in 5e. Is this simply a change in the illustration or are there explicit/implicit reasons to think that aarakocra can wield weapons/shields while flying?

If you look at the image, plain common sense indicates that the arms move independently of the wings. The wings aren't even attached at the shoulders, but right behind the shoulders, further reinforcing this.

Now, if you look at the flavor text, several things point to the fact that they should not have too much problem striking with held in hands weapons while also flying:

They hail from a world beyond — from the boundless vistas of the Elemental Plane of Air.

Making denizens of the Plane of Air have extra-sub-par flying capabilities would go a bit contrary to the overall general principle that "it comes from another plane = it's better".

Nowhere are the aarakocra more comfortable than in the sky.

If they could attack only when standing on the ground, not while they are flying, then that would kind of directly contradict that sentence.

In battle, they prove dynamic and acrobatic fliers, moving with remarkable speed and grace, diving to lash opponents with weapons or talons before turning and flying away.

This very clearly states that they can attack with weapons while flying. Diving is still a form of flight, it is not like "falling".

Finally, look at the Aarakocra traits:

They gain Flight 50 feet, and that trait specifies that they can't be wearing medium or heavy armor. Nothing is said about a limitation on weapons, so there is no such limitation. Just like a Wizard casting Fly, is able to fight with weapons while flying, so too it is the exact same thing here.

In fact, apart from the obvious stat increase, Flight is really their only trait worth anything at all. And on land they move slower than most normal races! As for the Talons trait, that merely gives them competence with Unarmed Strikes, for a measly d4. But Talons doesn't give them a bonus attack at all. Almost every other form of attack will deal more damage. It's like a sickle that cannot be Disarmed, nothing more.

Also, if using overall D&D 5e game design logic: Equivalent features are not epic for some PCs, yet extra-gritty sauce for others. Aarakocras natural flight already pales in performance comparison to the Fly spell (slower, armor-type limited, self-only), but is overall better than Fly because it does not need spell slots or Concentration. But forcing Aarakocras to have to choose between flying or striking with weapons, that would seem quite a too steep penalty and make them very unfairly balanced. Or even comparing an Aarakocra, a natural born flier, to a paladin riding a pegasus: the paladin can strike while controlling his mount, so obviously the Aaracokra should be able to do the same too.

However, unlimited flight, especially at low levels, can break a lot of encounters. Outside, just pepper your foes from way above with arrows. Inside, you can bypass 99% of traps (unless magic is so hyper-abundant that even at level 1 most traps are magical). But really this race has one thing and one thing only, so it should be at least a quite good ability.

Yes, they have both arms and wings.

Overall, I think it's rather clear that they do indeed have both arms and wings.

Yes, they have both

The details for the Aarakocra includes this text:

In battle, they prove dynamic and acrobatic fliers, moving with remarkable speed and grace, diving to lash opponents with weapons or talons before turning and flying away.

There is nothing in their stat block saying they can't fly and use weapons at the same time.

They definitely have access to a pair of hands while flying.

The abstract way to think of is probably that they are using hands and arms.

In one earlier source (sorry I forget the reference) their claws were able to grasp and hold like hands and they had full arms, however in that version it claimed that their arms were bound to the wings when in flight and not otherwise usable until the wings are folded. I'm pretty sure that's what you saw.

Trying to picture holding my bow and drawing arrows with talons did not go well...

So I just assume usable hands and arms in flight which I'm sure it's what the playable 5e class intends.

This image is from page 165 of Explorer’s Guide to Wildemount (actual photo of hardcover sourcebook): 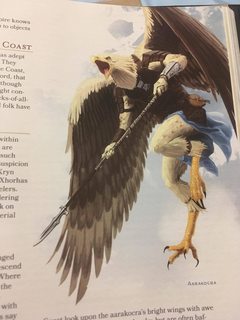 It clearly depicts a torso with both wings and fully functional arms wielding a spear in combat.

The same image appears in the pdf of Elemental Evil Player’s Companion: 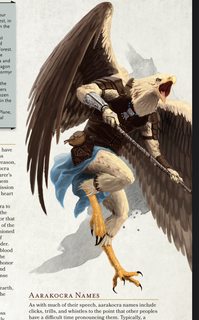 Human genesis was in Africa, yet Cherokee ect... are considered native to North America. A sapient race of birdmen, evolved from birds (4 limbs) could have moved to the plane of air in prehistory, and became natives. In that respect aarakocra are not made of, from, or in elemental air, but merely adopted it, like the Cherokee ect... adopted North America. Balance wise 4 limb aaracokra can't use handheld weapons while flying, but can attack with their feet. The same way human's feet are preoccupied while walking. Most vertebrate animals, including birds like aarakocra, have 4 limbs (not including tail). It makes no sense for aarakocra to have 6 limbs.

Not the answer you're looking for? Browse other questions tagged dnd-5e aarakocra or ask your own question.

9
Prison break with an Aarakocra
3
Do aarakocra have rules about gliding?
8
How can I play an Aarakocra in 3.5e?
19
Can an Aarakocra look like any bird?
16
Which of these sources for Aarakocra lifespan is correct?
3
Can I play a flightless Aarakocra?
1
Can an aarakocra grapple using their feet?