Does Mage Hand give away the caster's position?

I was thinking about casting mage hand while hidden to do things like, for example, pulling a lever behind a guard's back. But if I'm not an Arcane Trickster, the hand is visible and the question is, does it have any kind of “spectral” connection to me as its caster?

The spell doesn’t say anything about a visible connection to the caster:

A spectral, floating hand appears at a point you choose within range. The hand lasts for the duration or until you dismiss it as an action. The hand vanishes if it is ever more than 30 feet away from you or if you cast this spell again.

You can use your action to control the hand. You can use the hand to manipulate an object, open an unlocked door or container, stow or retrieve an item from an open container, or pour the contents out of a vial. You can move the hand up to 30 feet each time you use it.

But in Xanathar's Guide to Everything, on page 127, this picture appears. The hand seems to have a connection back to the caster, showing the source and where they are: 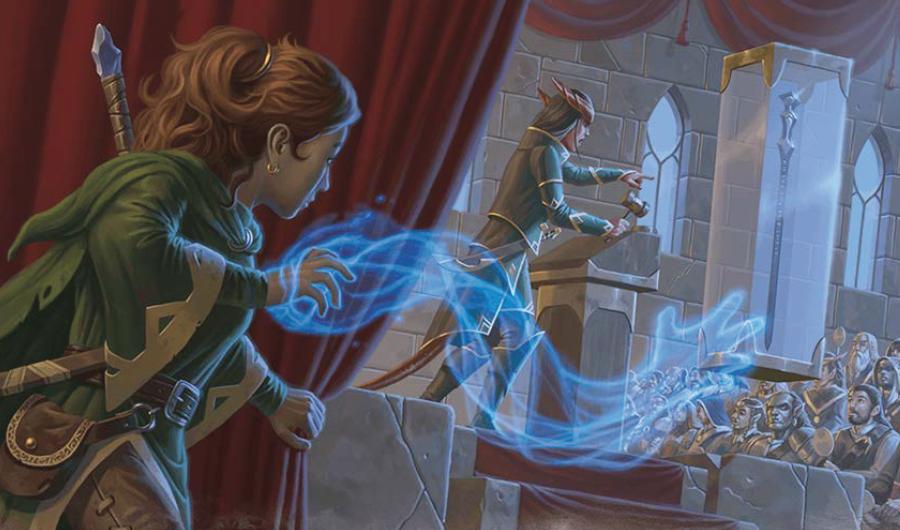 Does that mean that everyone can see where you are hiding if you use your mage hand? Can they always trace the mage hand back to its source?

Or is the artwork in the book not “approved” rules-wise?

Under the usual proviso of "spells only do what they say they do", then there is no indication in the spell description that the mage hand is visibly connected to the caster.

As you quoted yourself:

A spectral, floating hand appears at a point you choose within range.

There is no reason to believe there is any other visual effect. (Though the guard would probably realise that a caster is somewhere in the vicinity, depending on how savvy he is and how common such magic is in your setting)

As to the picture in Xanathar's, there are two (well, three) explanations:

First, the simplest explanation, is that the picture is misleading. This isn't a very satisfying explanation though and a bit of an insult to the artist. And the editors may have approved this image simply because that's how they imagined the spell despite the slightly contradictory description (as NautArch commented below).

Second, there is usually no harm for players (or DMs) to come up with their own visual appearances of many spells, as long as it doesn't ordinarily provide some mechanical advantage. This is all part of a DM setting the scene, e.g. describing magic missiles as zipping blue lights, purple spears of power or balls of mist with a vaguely skull-like appearance normally doesn't matter! In this case, the artist has decided that his or her wizard's Mage Hand does look like that.

Third, it is just a visual representation for the purposes of letting you, the viewer, know that the woman behind the curtain is actually the caster (which perhaps may not be too obvious). This is similar to how comic books often represent "invisible" characters - as a faint outline that you can see, but which its conventionally understood cannot be seen by other characters in the comic.

No, the image doesn't reference mage hand and the spell doesn't describe it working like this.

I honestly never would have thought this an option before seeing that picture. The written description seems clear (see below) and the illustration shown in the question doesn't say what spell/ability it is depicting. It has no title, no label, no description. Assuming it's mage hand is purely an assumption.

The spell description, as you've quoted, doesn't specify if there is a connection between the caster and the mage hand. It just calls it:

I personally think because the language doesn't state there is one, that there isn't one - but that image from Xanathar's is interesting, but the lack of title to the image makes it purely an illustration of something and not necessarily of mage hand.

At my tables there is no trail

We generally utilize it as a singular hand with no trail. I'm not sure we've even considered that there would be a spectral trail leading back to the caster (clearly we never looked at the illustrations.)

As PJRZ notes in their answer, adding descriptive language to make a spell your own is generally fine at most tables. But adding language that creates advantages, or disadvantages, is something to avoid.

For this class ability, we saw it working the same way as above - but this time the hand can be invisible.

Here is the case where things DO change. Mage hand has a verbal component, and therefore casting the spell would reveal your position. You can see this question on how loud/obvious a caster is.

But there is no verbal command required for directing the mage hand later, and you could so with impunity (assuming your DM does not rule a spectral trail.)

FIRST: ArtWork is what it is.. ARTWORK. None of them are RULE approved. they are just nice pictures.

SECOND: As stated in the PHB under the 'Hiding' rule...

Making noise give away your position.

Casting with a VERBAL spell component (which mage hand IS) Will give away your position, so when you cast mage hand everyone within hearing distance know where you are unless you can cast the spell without Verbal component.

BUT, once the spell is cast, you can move around and HIDE elsewhere and as long as you are no longer making any noise and keep taking the HIDE action on every turn. no one knows where you are unless they beat your HIDE check with their passive perception. You can then continue to use mage hand from your new secret location as long as the spell lasts.

There is no way to confirm that there is a trail or not. As far as we know, the image on page 124 might be another spell entirely, like Chill Touch.

Casting mage hand, as far as the phrasing of the spell tells us, does not include a trail to the caster, thus it would not reveal the exact position of the caster ... but it would reveal the fact that there is a caster in a 30 foot radius of the mage hand.

I like to take a look at the Arcane Trickster's Mage Hand Ledgermain class feature, since one of its advantages is the ability to make Mage Hand invisible which allows him to remain hidden more easily.

Starting at 3rd level, when you cast mage hand, you can make the spectral hand invisible, and you can [...]

Without this feature existing, I would answer that it is "Gm's choice" but this rule kind of make it obvious how regular Mage Hand was intended to work, rules wise.

TL;DR: There does not seem to be a rule directly corelating 'Mage Hand' vs 'Caster detection' so in the end it depends on a group/GM's ruling. I do believe comparing 'normal mage hand' to 'arcan tricker's mage hand' gives us arguments that can help in making a decision for our games on this question.

Not the answer you're looking for? Browse other questions tagged dnd-5e stealth cantrips art or ask your own question.

42
How loud/obvious is a wizard casting a spell?