How do you determine the reach of a Monster's unarmed strikes?

This is inspired by the question "Does a Stone Giant get an attack of opportunity if I move only 5 feet away from it?".

The question "Can a monster with no melee attack make an Opportunity Attack?" (as well as the Sage Advice Compendium) establishes that monsters do have unarmed strikes. I'm wondering then, how to determine the reach of this attack, if any such method exists at all.

Is there a rule somewhere that explains how the reach of an unarmed strike should be determined for creatures such as the Stone Giant, whose only melee attack has a 15-foot reach? Or creatures like the Kraken, who have multiple melee attacks with different reaches? The previously linked question also mentions the Flameskull, which has no melee attacks whatsoever.

Is there any way, provided in the rules, to determine the reach of a given monster's unarmed strikes?

RAW, the reach of an unarmed strike should be 5 feet unless otherwise noted.

Most creatures have a 5-foot reach and can thus attack targets within 5 feet of them when making a melee attack. Certain creatures (typically those larger than Medium) have melee attacks with a greater reach than 5 feet, as noted in their descriptions.

Emphasis mine. Unless otherwise noted, a 5-foot reach is the only guideline we have. RAW, then, monsters have a 5-foot reach unless they are explicitly noted to have a different reach.

What does it mean for a monster to be unarmed?

Obviously a monster carrying a polearm and trying to attack with it is making an armed strike, and in the case of a weapon with the Reach property that can have an explicit reach of more than 5 feet.

But that won't typically change a monster's reach for an unarmed strike-- they can't attach a fist or a foot to the end of the polearm and then punch or kick from 10 feet away as an "unarmed strike".

There is an interesting possible exception when we come to attacks with natural weapons, like tentacles. These are attacks defined in stat blocks and aren't listed as unarmed strikes, so it's a plausible ruling that such creatures have an unarmed strike available in addition to their natural weapons, with a default range of 5 feet.

But it's also plausible to decide that a normal body part isn't the same thing as a distinct object wielded as a weapon, and so attacking with one is, for all intents and purposes, an unarmed strike, and would have the range described in the stat block entry for that attack.

I think each DM would have to adjudicate that for their own table, but it might be a pretty rare case. For monsters with natural weapons, attacks with those weapons are generally going to be better than a default, available-to-all-creatures unarmed strike would be.

Here we leave the happy realm of RAW and start interrogating and extrapolating from what's published.

If it seems counterintuitive to you that a larger creature should only have a 5-foot reach, it seemed that way to me as well, but that is nonetheless my conclusion. My reasoning is as follows:

A medium creature takes up one 5'x5' square (1x1 squares on a grid), its body is centered in the middle of one square, and can reach up to 5 feet out in any direction from any edge of that square.

A large creature takes up more squares (10'x10', which is 2x2 on a grid) and so its body is centered on a vertex rather than the center of a square. From that point, it (unarmed) already covers 5 feet to get to the edge of the squares it's occupying and then extends an additional 5 feet into its engagement range. This pattern scales with bigger size classes.

It may also, as a result of its height, have effective vertical distance to deal with in its reach (a 10-foot tall giant can't swing its arm out straight in front of it and expect to hit a 5-foot tall enemy), but that's just flavor and is not represented explicitly in the rules.

None of this has any bearing on a weapon such a creature might pick up:

The standard frame of reference for this is corrupted somewhat, as the game does not define space smaller than 5 feet very well and so may overstate the reach a medium creature has. It's honestly weirder that a medium-sized creature can freely reach a distance roughly as long as its own height without moving than for a giant's reach to be described as I did above.

Which is a longwinded windup for: the most direct interpretation of the 15-foot reach for the Greatclub attack is that the Stone Giant is wielding a club that is between 7.5 feet and 10 feet long or so, roughly similar to the proportion we might expect from a medium creature wielding a "normal"-sized club. If it's not using the Greatclub, it has no way of covering the extra distance described in the Greatclub attack.

I'd like to tack this on to Upper_Case's answer.

There does not seem to be any exact, rules-supported correlation between monster size and a value that can be calculated for its unarmed strike reach.

Take, for example, Stone and Fire Giants which use a greatclub and greataxe, respectively. Referencing the stats for these weapons as sized for medium creatures (ie, those listed on the weapons table), neither of these weapons impacts a wielder's reach.

These giants, according to the Monster Manual (pg 153) are, statistically, the same size: 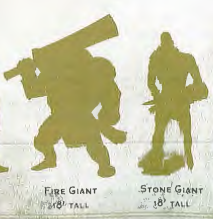 And yet, comparing the stats for these two identically sized giants which wield weapons that do not seem to augment the wielder's reach, we get these attacks:

This tells me that, unless stone giants' arms are knuckle-draggingly long (the lore does not indicate this), there is not a single, common ratio of size to reach that can be universally applied.

Even so, size and reach are highly (not perfectly) correlated so that it should be both possible and reasonable to use Upper_Case's suggestion of establishing a homebrew equation.

Not the answer you're looking for? Browse other questions tagged dnd-5e monsters unarmed-combat reach .

35
Can a monster with no melee attack make an Opportunity Attack?
10
How do I know what my reach is?
8
Does a Stone Giant get an opportunity attack if I move only 5 feet away from it?
5
Does Enlarge increase your normal reach?

15
Can reach weapons attack and receive attacks of opportunity with an ally in the way?
6
What are the practical Opportunity Attack values for a bugbear, holding a reach weapon, with the Polearm Master feat?
3
Would anything change if Opportunity Attacks only allowed you to make melee weapon attacks?
8
Does a Stone Giant get an opportunity attack if I move only 5 feet away from it?
2
Creature "Armed" Unarmed Attacks and Attacks of Opportunity
5
Is a creature's reach linked to the reach of its attacks?
6
Do named actions in monster statblocks use the Attack action?
25
Why do we assume that PHB rules apply to monsters?