What is the best favored enemy type for a revised ranger in the Dungeon of the Mad Mage adventure?

I’m working with a DM’s approval to help a player choose a favored enemy for a UA revised ranger without spoiling the player on Waterdeep: Dungeon of the Mad Mage. In this agreement, I’m doing to spoiler-seeing work.

I am trying to find what would be the best choice of favored enemy for this player’s revised Ranger, based on what’s in DotMM. I’ve found a list of the population by level on reddit, which could help.

Using the link you provided for the population per level, I made a table of how often each unique creature appears on each level with the DOTMM. I did not include the number of each creature as I thought this may tilt the count towards types with more lower CR creatures in them. 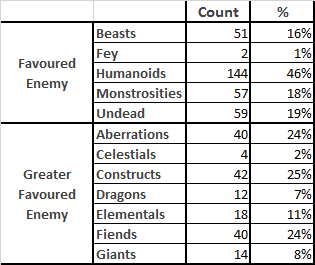 As you can see from the chart above, Humanoids are by far the most numerous Favoured Enemy Type in DOTMM, with Undead second, and Monstrosities third. In my opinion, either one of these three would be fine to pick, as there is a larger number of Humanoids that you may not even fight, as this list includes all possible encounters. A large number of these humanoids you can choose to just ignore, or possibly talk your way out of a fight.

The BBEG is also a humanoid, so that may make Humanoids obviously more enticing than the other types. You will most likely find this out fairly early on depending on how your DM runs it/you guys play it.

Also, some of these enemies are low CR, so may just be blown up by a well placed fireball before your ranger gets to attack.

Undead includes a large number of Liches/Undead Beholders which can be quite tough.

The Greater Favoured Enemy list is much closer in terms of the top three, which are Constructs, Aberrations, and Fiends. Each have a similar distribution of CR levels as well, so this one really comes down to personal preference. There is a slightly higher number of high CR Fiends, though not enough to make it obviously better to pick Fiends over Constructs of Aberrations.

Ultimately, it depends on what the player prefers

It is quite hard to pick one obviously right choice, as what you encounter ultimately depends on what your DM throws at you, and which paths/places the party spends more time in. In my opinion, any one of the top three for each group of favoured enemy will be your best choices.