Are these two Barons von Dammenblatz the same person?

I tried to find other occurrences of the Eberhardt name but even this extensive character list mentions only Baron von Dammenblatz, and this is too vague to be useful.

Official word on this matter is preferred.

I ask Cubicle7 by Email and here is the answer :

Actually, the flaw is in the original from WD 94. The first mention of von Dammenblatz calls him Otto, and on the very next page his name is changed to Eberhardt. All these years and no one caught that. The error is perpetuated in Plundered Vaults, and finally corrected in RN&HD.

The spelling of Wissenburg/Wissenberg is one of many instances of names and locations changing in various iterations of the Old World. The best known are the various locations of Delberz and the spelling of Immelscheld/Immelscheid, both of which I intended to address in the Director's Cut.

Anyhow, this one can easily be but down to scribal error on the part of some cartographer's apprentice charged with lettering the map. The Old World is a pre-literate society on the whole, and spelling is various, as it was in the real Middle Ages and Renaissance."

I also found this:

Both words are derived from bergen which means something like to be in a safe position. Way back when, a human fortress and natural defences like mountains both offer high ground (advantageous attack and vantage point) and thus relative safety. 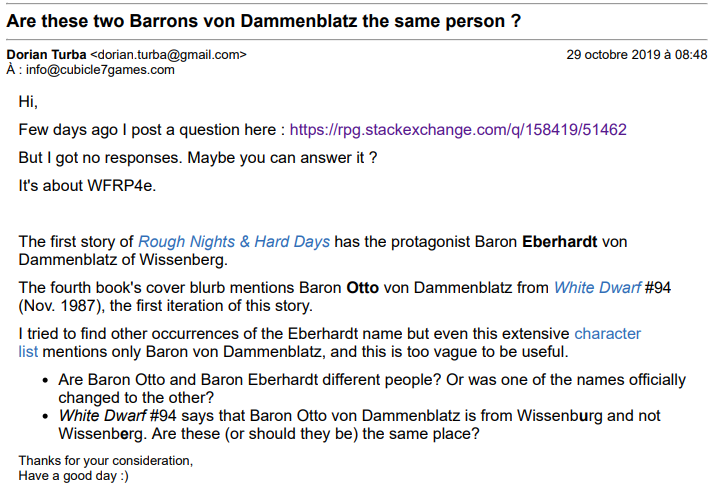 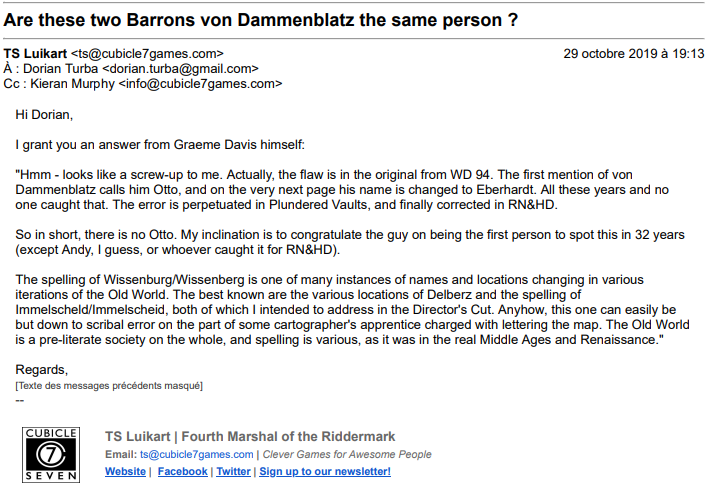 Not the answer you're looking for? Browse other questions tagged published-adventures lore npc wfrp-4e or ask your own question.

9
Are spectators born the same way as beholders?
2
Is the Vortex the same as the adventure in the starter set?
19
What is the “+ 75” in these NPC hit point stats?
8
What is the relationship between these two characters?
2
Is the Greenskin Invasion defeated at Nuln the same one that captured the High-King of the Dwarfs, Kurgan Ironbeard?
15
Are the Githyanki and the Githzerai a single race with two subraces, or two separate races?
2
Are these proposed effects of consecrated ground suitable for Curse of Strahd?
9
What locations do these Official Forgotten Realms inspired Magic the Gathering cards reference?