In what order do damage resistance, damage reduction, damage thresholds, and half-damage from a successful save apply?

I am curious how different damage-reducing rules in Dungeons & Dragons 5th Edition play with one another. Mainly, it is an order-of-operations question.

There are the more common effects: Damage Vulnerability, Damage Immunity, and Damage Resistance, as well as damage-reducing effects when a creature succeeds on a saving throw caused by certain spells, like fireball. However, there are also Damage Thresholds, and sometimes a static reduction in damage as outlined by the Heavy Armor Master feat (PHB, page 167).

Theoretically, if a creature or object could get a set of four of these benefits at once (outlined below), in which order would they take effect?

For example, imagine a theoretical golem that has the following properties:

Now imagine this golem has just succeeded on its save against fireball. It is receiving 40 fire damage before any modifiers. How much damage will this golem take? What are the calculations made to determine this?

First the saving throw, then damage reduction, then resistance, and finally the threshold

This answer will largely rely on two previous question and the rules on resistance/vulnerability:

These give us most of the rules we need to adjudicate the damage taken by your monster; in particular we know from the quoted rule above that resistance is applied last and, to quote the first question linked:

We also know from the second question I linked that (direct quote):

You take 1/4 the total damage. You are looking at two separate events. The first event is whether or not you are hit with the 'full force' of the attack (your saving throw determines this). You can think of it like diving out of the way of a fireball, or ducking under a column of ice.

If you pass the saving throw, you take half (you successfully avoided some of the damage). If you don't, you take the full amount.

Now, after this, you resolve your resistances.

This lets us know that all of these can apply to a single instance of damage. Furthermore, notice that the saving throw will always be the first thing that happens; if we succeed on it, the damage will immediately be halved; if we fail it, the damage will not be reduced. Then we apply any damage reduction (such as the Heavy Armor Master feat), and finally we apply any resistances we may have.

The question left is when does the damage threshold come into play? Let's look at the rules on "Damage Thresholds":

And so we've arrived at the following ordering:

Here is an example using your numbers assuming the creature takes 40 damage:

If you're interested in a mathematical formula/interpretation you may use the following where X is the initial damage:

Looking at the above facts we can see that another way to calculate this is to take the total initial damage, subtract six, divide it by 4, and round down. Or in a formulaic form:

Another way to arrive at this formula is to use the following equality to our previous formula, this equality holds true for all positive integers h: 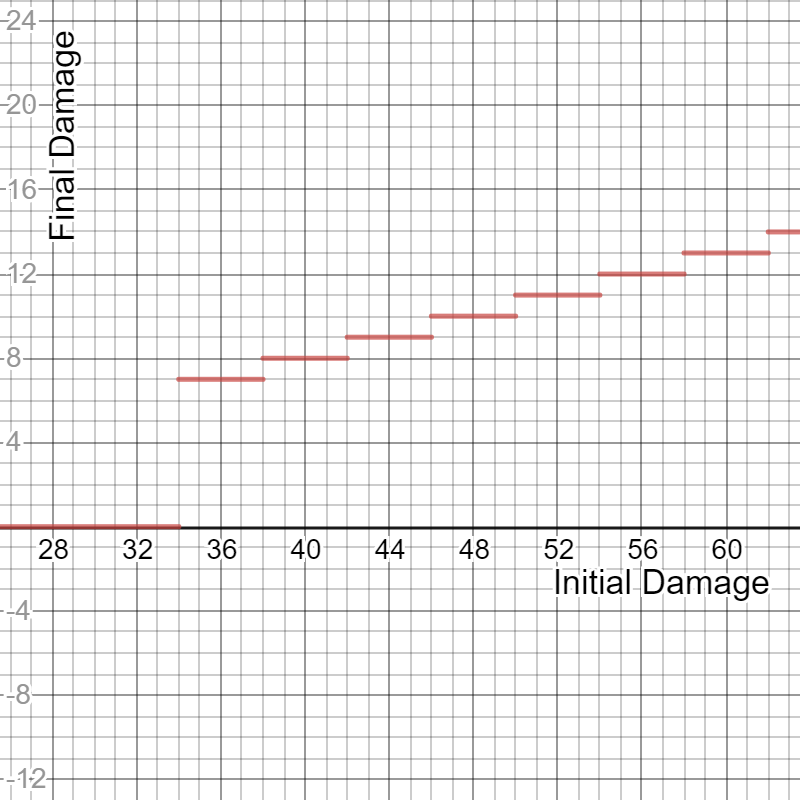 Notice that until you reach a damage of 34 the creature will take 0 damage and then at 34 it will take 7 damage. Also note that the end of each line is somewhat misleading. At a value such as 38 which is on two lines, the correct final damage is the higher number. So at 38 the creature would take 8 damage, not 7. Also, yes, the function provided is not exactly the graph shown, I had to make a piecewise so that it was always 0 when the initial damage was 33 or less, but the rest is identical to the formulas given.

9
Can someone explain how HP's stack with various spells?
13
Warding Bond: What is the Order of Operations for calculating cleric damage taken?
26
Damage reduction and damage resistance: how to calculate?
36
In what order should one apply max HP reduction and damage?
4
How does the Shield Guardian's damage transfer work when the bearer is immune/resistant to the damage type?
16
If a poisoned arrow's piercing damage is reduced to 0, do you still get poisoned?
6
Does the Meteor Swarm spell damage objects that are being worn or carried?
11
Does damage reduction from Shadowfell Brand Tattoo stack with resistance?
11
For the Redemption paladin's Aura of the Guardian feature, can the damage the target would take be reduced before Aura of the Guardian triggers?