Can this “AC per CR” chart be used in “DPR per level” calculations? [closed]

Ask Question
Asked 11 months ago
Active 11 months ago
Viewed 183 times
-2
\$\begingroup\$
Closed. This question is opinion-based. It is not currently accepting answers.

Inspired by this, this, and this, I just processed this list of monsters to get the average (and standard deviation) AC in monsters, by CR. It comprises all the SRD monsters, I believe. 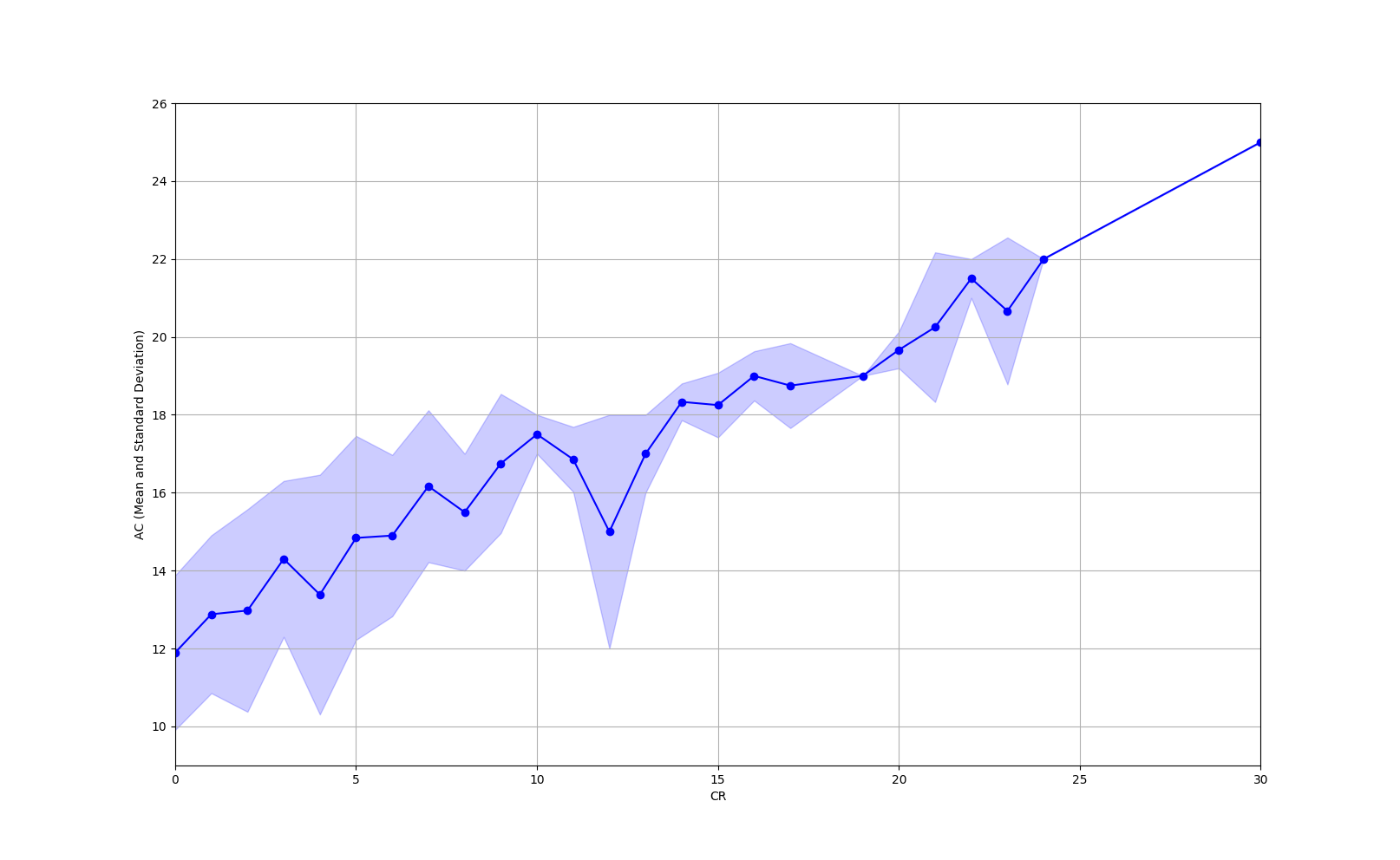 A common DPR chart shows the average DPR of a character at a given level. DPR often depends on the to-hit bonus of characters and the AC of monsters. For example, at level 10, Bob can either:

We can't justify which one is better without knowing how often Bob hits his attacks against his enemies.

Can this graph be used in DPR charts? Ideally, it could be translated to find, for a character of a given level, the average AC of the monsters he faces.

One way would be to consider the character's level to match the CR of enemies. So, for example, Bob would calculate its accuracy against an enemy of CR10. Bob has a +5 to hit, does 9 damage per attack, 3 attacks per round, and a CR10 monster has an average of 18 AC.

If a MonsterCR to CharacterLevel matching isn't adequate, what would be? Can we use standard encounter-creation rules to build a chart that matches player level to average enemy AC?

Your chart would be helpful if only enemy CR increased. However, since a DM or adventure designer could simply include more enemies, that would throw off any simple relationship between character DPR and monster AC.

Not the answer you're looking for? Browse other questions tagged dnd-5e optimization or ask your own question.

20
Which Armor Class values should be used as controls when making damage calculations?
7
Average AC of monsters per CR?
5
Is there an accepted likelihood of hitting that is consistent across tiers, and how has it been determined?

5
Optimizing Riddick Build
2
Can multiple conditional bonus attacks activate on the same turn if those multiple conditions are all met?
5
How can I optimize my ranger?
2
What is the point of increasing the Strength attribute?
11
How can I compare the damage gain between Bless and Faerie Fire?
10
Is this a time to choose minimum damage per hit over average DPR?
15
Achieving highest Rogue DPR at 3rd level using PHB+1
15
As a half-orc Barbarian, is it worth it to dip some levels into the Fighter class?
1
How much damage can a level 8 ranger deal in a typical combat encounter?
1
What is the highest average damage that a level 10 character can deal in response to being hit or damaged?