What exactly are you getting when you buy an Emblem Holy Symbol?

The description for the Emblem Holy Symbol is as follows (PHB, p. 151):

Holy Symbol. A holy symbol is a representation of a god or pantheon. It might an amulet depicting a symbol representing a deity, the same symbol carefully engraved or inlaid as an emblem on a shield, or a tiny box holding a fragment of a sacred relic. Appendix B lists the symbols commonly associated with many gods in the multiverse.

So my question is, if you walk into a shop and "buy" an emblem (it costs 5gp, so it must be possible to purchase it), what exactly are you buying? This is my main question. The below offers some context and background to this question...

Here are some of my thoughts on the matter, which I've included for context:

Note that the above questions are not actually my main question, they are just included to show my train of thought, which I feel is important to show the context of the main question. I do not expect answers to address these questions individually!

What I'm really getting at here, if I use my real example, is that in a game I am DMing, the party's paladin (who has a shield with an emblem on it as per starting equipment) has raised concerns about having to buy a new holy symbol if they get a +1 shield in the future. This is unlike any other holy symbol, which you simply have forever (assuming you don't lose or destroy it), since it is it's own distinct object, so the emblem would need to be replaced is a unique case here.

Following the rules of what is required for a shield to satisfy the material components for spellcasting, I would say that they could just "buy" a new emblem and apply it to their new shield. But that got me thinking, what exactly would the paladin be buying at that point, and would it be possible to simply transfer the symbol over from their old shield to the new shield at no cost? This is a unique case, as for the other holy symbols, replacing some other piece of equipment would not impact them like this.

So, what exactly is an Emblem with regards to what a PC would be buying in-universe?

Note that I'm not looking for opinions, and if the answer is simply "this is not explained anywhere, as DM you have to decide what this means", then that's the answer.

What exactly is an Emblem with regards to what a PC would be buying in-universe?

It is an ornate carving or inlay on a shield. When placed on a shield, it is essentially ornate artwork that exists in addition to the shield itself.

Are you buying some kind of "official pattern" that is required for a shield to count as having a proper "holy symbol" (as in, satisfies the material components for spellcasting) emblem on it? Almost like a "patented pattern"? Then why couldn't you just buy one and replicate it yourself for free forevermore after that initial purchase?

It would either be a ready-made product with the holy symbol already applied you're buying off a shelf or a pattern you're picking from a pre-made list (or supplying yourself) and having a craftsman apply it a shield you're providing.

The DMG and Xanathur's guide cover item creation, so you could find the mechanics to reproduce the pattern, but item creation takes time which isn't always a resource adventurers have to spare.

Are you buying the "manual labour" to actually engrave/inlay the thing onto your shield? Then would it make sense that this can only be purchased from a blacksmith rather than from the local temple (where one might expect the other holy symbols–amulets or reliquary–to be purchased)? And could someone with Smith's Tools (and proficiency with them) not do it themselves for free?

You're buying the manual labor to carefully engrave and inlay the chosen pattern in the shield. Engraving a shield is not as simple as stamping on a pattern or painting on a plain symbol. It involves setting dyes in wood, chemically treating and tempering metals to change its color, and many other laborious expertly performed crafting tasks.

Not all patterns chosen to be inlaid on a shield are holy ones, and not all holy symbols would have to be sanctioned by a church. Your paladin's interpretation of their god's holy symbol could very well be a personal one and not something recognized outside their own beliefs.

Smith's Tools would allow them to create a shield. Artisan's tools would allow them to create the design. The combination of the two could potentially be used to engrave and inlay the design in an ornate fashion, but there are no rules as written that specify this process. Out of game knowledge identifies that it is two different skillsets to create an item and then make that item look pretty.

Here's an example of a traditional Indian engraved shield: 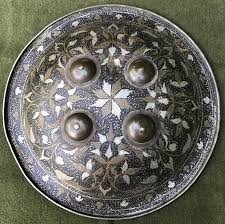 More ornate and decorative designs exist, but this one looks like it could still be functional.

Making the buckler is relatively simple compared to larger shields, but the engraving is not something a blacksmith who makes the bucklers necessarily knows how to do.

Are you effectively buying a shield that has already been made with that engraving/inlay "officially done", so you're basically buying a shield for 15gp (or a 5gp markup on whatever shield you're buying), and you can't actually buy just the emblem by itself for 5gp?

You could be buying a holy symbol'd shield off the rack or commissioning someone to make one. The books don't specify one way or the other since it shouldn't really matter for the overall narrative.

The rules don't elaborate on this

The exact details as to what a "symbol carefully engraved or inlaid as an emblem on a shield" actually is or what buying such an item means is a detail left up to the DM. So a DM may use any of the options presented as bullet points in the question if that is that DM's understanding, or none of those options.

Of course, the DM would need to consider whether PCs can replicate these for free, depending on their chosen interpretation (i.e. if the 5gp is to pay a blacksmith to engrave it on a shield–which is what I eventually went with for my party's paladin, by the way–then could a PC with Smith's Tools and proficiency with them do the same for free? Would they need to use "special" or magical Smith's Tools for magic shields? etc).

As for some further evidence that not all items listed in the PHB with a cost necessarily involve you literally "buying an object", there's also the "Tack, Harness and Drawn Vehicles" table under the Mounts and Vehicles section (p. 157), which lists various objects but also "Stabling (per day)", which has a cost of 5sp and a weight of nothing (–). This is another "thing you can buy" that is not specified because the details are expected to be filled in by the DM. The same argument applies to the costs of lodging for PCs (p. 158).

This shows that the items listed in the PHB are just a guideline for how much things should cost, not necessarily exactly what they are or how they work beyond the guidance it gives us (i.e. the quote included in the question).

Buying a Holy Symbol is a lot like buying one in real life - only in the case of Paladins, they'd probably want something very well made. It doesn't say anywhere that a holy symbol has to be anything particularly special in terms of power (though it can be), so let's say the holy symbol is a cross. If the character carved it out of wood, that's a symbol. They can also buy one blessed by a priest, made of silver with intricate designs, and wants it bedazzled with all sorts of colors (which would be the more expensive 5 gold and hey, maybe the bedazzling will distract the bad guys because that always looks tacky).

Assuming the character is going to a blacksmith to buy the shield, he could certainly ask to pop the symbol off the old shield and have it added to the new one. The blacksmith could sigh and say that will cost a little extra because of the work involved, but he'd probably remove the symbol anyway so it was back to being a generic shield and not specific to a denomination. Or, you could roll to see if the blacksmith can successfully take the symbol off without breaking it and then depending on the outcome have him buy a new one.

Ultimately, how that plays out is up to you and if you want to rigidly stick to the books (which seem to encourage buying a new one here) or have a more realistic approach. If it makes sense that the Paladin would want to keep that specific symbol and not pay for a newer/shinier/undamaged one, then there's nothing I can see stopping it from being transferred. It could also be if he's buying a shield the smith throws on symbols for a bunch of common Gods so he just has one in stock, or he'll cut you a deal and etch the symbol into the shield for a fee. It's a collaborative story, so whatever story you want to tell, tell it.

60
What is a spell slot in-lore, and how does it justify the limits on casting spells?
3
What is allowed to be a holy symbol?
5
Can a Sentinel Shield Be Painted With A Cleric's Holy Symbol?

3
Does my longsword +1 add bonuses to casting, if swords are my holy symbol?
12
Crafting an Improvised Spellcasting Focus?
5
Using an Improvised Spellcasting Focus
13
Can a spellcaster switch between multiple foci?
37
PC cleric lost holy symbol - what now?
5
Can a Sentinel Shield Be Painted With A Cleric's Holy Symbol?
13
Can a weapon be a holy symbol?
12
Do you need a free hand for your holy symbol if you're wearing it visibly?
6
Divine spellcasting aside, can the actual symbol of a deity have any effects which are not purely symbolic?
4
What is the mechanism for a character swapping their arcane/Druidic focus