What happens when an anti magic field gets close to a polymorphed creature?

I am playing a cleric who has a persistent anti-magic field on him, from which he is excluded.

I use the following feats:

This means that if I approach something magical, the spell is suppressed in a range of 10-ft.-radius emanation, centred on me.

If I get close to a wizard that has Tren shape (page 87, Serpent Kingdoms) via Alter Self he momentarily loses the transformation because the spell is suppressed. In fact, the tren occupies a space of 5 ft. and falls within the range of the 10 ft anti-magic field.

But what happens if the magician has turned into a monster with Gargantuan size (15 feats) thanks to polymorph?

If I bull-rush him, should I consider the size it has without polymorph or vice versa?

If the size is that of Polymorph my charge would not reach the goal because my weapon does not have sufficient reach. Without polymorph, I will continue past the spell

The 6th-level Sor/Wiz spell antimagic field [abjur] (Player's Handbook 200), in part, says, "Should a creature be larger than the area enclosed by the [antimagic] barrier, any part of it that lies outside the barrier is unaffected by the field." The Rules Compendium on Antimagic on Creatures expands this further saying, in part, that

(This text doesn't appear in the PH, Monster Manual, or Dungeon Master's Guide—and if it appeared in another text before the RC then this writer doesn't know which text. Thus its provenance may mean this rule doesn't apply in your campaign—see here and ask the DM.) Contrast that RC quotation above with the beginning of the Rules Compendium's next paragraph: "Summoned creatures of any type disappear if they enter an antimagic area. Incorporeal creatures do the same" (11). With these rules in mind, this answer takes what I expect will be a somewhat controversial position. (To be fair, though, I'm not sure there are any noncontroversial positions where antimagic is concerned.)

"That sounds a little fishy…"

Yeah, I know, and I also know that it may sound incredibly awkward. In practice, though, it seems at least better than the obvious alternatives. For example, this reading neatly answers the question of what happens when a were-giant squid gnome in giant squid form slides just 1 square of itself into an area of antimagic: pretty much nothing.

One alternative to this reading sees a were-giant squid gnome in giant squid form flicker infinitely and unresolvably between the assumed giant squid form and the original gnome form, the assumed form partially occupying the area of antimagic and the original form not. ("So, do we all just go play video games now or what?") Another alternative would have the DM determine which part of the giant squid from assumes original gnome form while the creature is partially in an area of antimagic. Neither alternative is playable. (Although I do credit this fine answer with ingeniously bypassing that first outcome!)

"Who picks what squares a creature occupies when the creature's size category changes?"

The DM must answer that question; the game doesn't. (The DM may consider applying generally details from the description of the 1st-level Sor/Wiz spell enlarge person [trans] (PH 226–7), but even then the question's still, like, 98% unanswered.)

Usually, this reader would advocate that the creature who is changing size pick the legal squares it occupies, but that's typically because the creature is changing size voluntarily rather than have its size changed involuntarily. The size changer has no stake in an area of antimagic or another's dispel magic effect—it's just another hapless victim. That said, unless persuasive alternatives were put forth, this DM would likely let the dice decide the squares the creature occupies .

However, if the attacker is just moving, the suppression of the defender's magic form-changing effect doesn't affect the attacker's movement. The attacker can continue his movement and does so with knowledge of the changed battlefield conditions (e.g. the giant squid is now a gnome). For example, on his turn the attacker can take a move action to move 15 ft. so that his area of antimagic engulfs the defender, a giant squid, suppressing the giant squid's magic form-changing effect and returning it to its original form, a gnome. Then the DM determines where defender's original form appears among the squares once occupied by the assumed form. Afterward, the attacker can continue his move action and head toward that gnome. And, when the attacker's adjacent to that gnome, he can take a standard action to make a bull rush attempt against that pesky gnome.

Finally, if the attacker's successful bull rush moves the defender's space even partially out of the area of antimagic, the defender's magic form-changing effect resumes if its duration allows.

Note: Whether or not a creature that's protected by an antimagic field spell that's been modified by the Complete Arcane metamagic feat Persistent Spell (81) then further enhanced by the Complete Adventurer feat Extraordinary Spell Aim (109) is immune to magic as if the creature were itself actually in that antimagic field is beyond this question's scope. (Also see this question.) Nonetheless, bear in mind that an area of antimagic in D&D 3.5 does not block line of effect like it did prior to the 3.5 revision. Suffice it to say, this seems to work in the campaign you're in, so have fun, and try not to overshadow everyone else.

Given that, and also given that summoned creatures are likewise not dispelled but wink in-and-out as they leave or enter the effect, I would rule that:

As an additional note, your cleric, being excluded from the area of anti-magic, is offered no protection from spells. Even something like magic missile will still hit since it will no longer be suppressed when it reaches you. Also, the larger polymorph-form creature would be able to attack you through the field, and interestingly could probably use the anti-magic field to overcome obstacles that might otherwise prevent it from reaching you, since the polymorph would reactivate in your square where it was attacking.

Wizard's new form disappears as soon as it overlaps with antimagic.

Magical effects usually disappear (are supressed) in antimagic. There is a paragraph, saying that spells may disappear partially - this section talks about area spells. There is also a clarification in Rules Compendium, that spells affecting part of a creature still exist on that creature.

Area spells don't become meaningless, if there is a half of one of them. Haste spell or Divine Grace may exist on a half of a creature. But when there is a half of a purple worm, there is something wrong. The effect of a Polymorph spell has strictly defined boundaries. There just can't be a half (or aproximately three quarters in your case) of an effect. Effect of a Polymorph also can't "move back" to take up its space somewhere, where there is no antimagic or make something along this line.

Jozan will bull rush Mialee in her original form... most likely.

The first thing, past this point 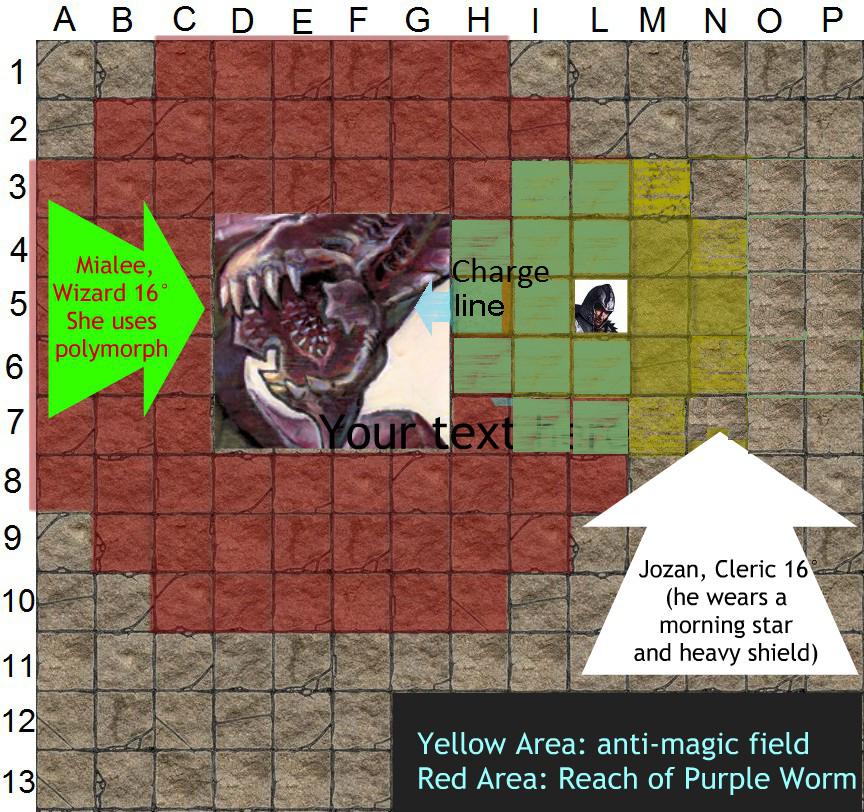 Jozan provokes an Attack of Opportunity before he is able to overlap worm's space and field's area. Attack of Opportunity may potentially spoil the charge and therefore bull rush. In your case, Jozah isn't protected by Antimagic Field from attacks directed at him, since he effectively isn't in an area of antimagic himself. So Mialee makes this attack as a purple worm with all its abilities and statistics.

If mentioned AoO doesn't stop Jozan's charge, then the area and the space overlap, effect of a Polymorph disappear, and Mialee appear somewhere in the centre (presumably) of worm's former space. As Jozan charges approximately towards that centre, I see no reason original Mialee not becoming "new" target of a charge if Jozah has enough speed left.

Not the answer you're looking for? Browse other questions tagged spells dnd-3.5e antimagic-field or ask your own question.

45
Does the Rules Compendium overrule the core books?
8
Breaking size limitation for lycanthropy
9
What's an emanation's point of origin?
8
Does the feat Extraordinary Spell Aim affect the creature's space or the creature?
-1
What damaged a creature that is in an antimagic field from which it is excluded?

3
Does a half-giant druid in Wild Shape retain Powerful Build?
2
Does Heedless Charge, Domino Rush and Improved Trip work together?
1
What is the Challenge Rating of this custom “Volcanic Dragon”?
14
Can an anti-magic field be detected via Detect Magic?
9
What's an emanation's point of origin?
8
Can a non-magical “Detect Magic”-type trait sense magic when used within an Antimagic Field?
3
What happens when a summoned creature uses antimagic field?
5
Can a Gargantuan creature be shoved into a Demiplane using the Polymorph spell and then released into a different plane of existence?
3
Does spike growth inflict cumulative damage on large and bigger creatures?