What's the greatest number of hands I can have to annoy my mother-in-law with?

My mother in law is coming to visit tonight, for dinner. She hates me, and will criticize my food. But tonight is my night. I've prepared the dish she most hates, a beautiful roasted Tarrasque chop, and as soon as she makes her first comment,

I want to flip her off. To give her the bird, as the High-Elves say. As many times as I can. And to do so, I require as many hands as possible! From my research, I have managed to create 9 hands to flip her off with, using a Sorcerer-3/Wizard-17 combination with Mage Hand, Chill Touch, Quicken Spell, Glyph of Warding, Bigby's Hand, and True Polymorph.

I cast my Mage Hand, which lasts for a minute. I prepared Bigby's Hand in a Glyph of Warding, which lasts 1 minute and triggers when I walk into it. It mimics my own hands. In the following turn, I cast Chill Touch, which leaves a hand on my mother-in-law (and some necrotic damage, but she deserves it). Using my Sorcerer Quicken Spell Metamagic, I also True Polymorph myself with a Bonus Action into a 6-handed Marilith, taking my concentration.

Using 20 levels, I managed to flip my mother-in-law off 9 times. I didn't find other monsters with many arms, but the fact that I have an entire day to prepare leads me to believe I can do better (although I don't want to prepare more than 1 Glyph of Warding or more than 1 Simulacrum, it's too cheesy for my dinner meal). Any ideas how?

Only officially published materials apply. Magic items are also valid. Consider you have an entire day / long rest worth of time to prepare. After she arrives, she'll only stay for a couple of hours and then leave to go back to the Underdark she crawled from.

With 36 hours to prepare, a level 20 wizard of the School of Necromancy can flip 1392 non-illusory birds in 3 rounds.

The answer provided by NautArch is pretty much unbeatable given the question as posed, but let's assume your mother-in-law has truesight and will therefore be thoroughly unimpressed by any illusory birds you flip at her. Let's see how many real (or at least non-illusory) hands we can make. 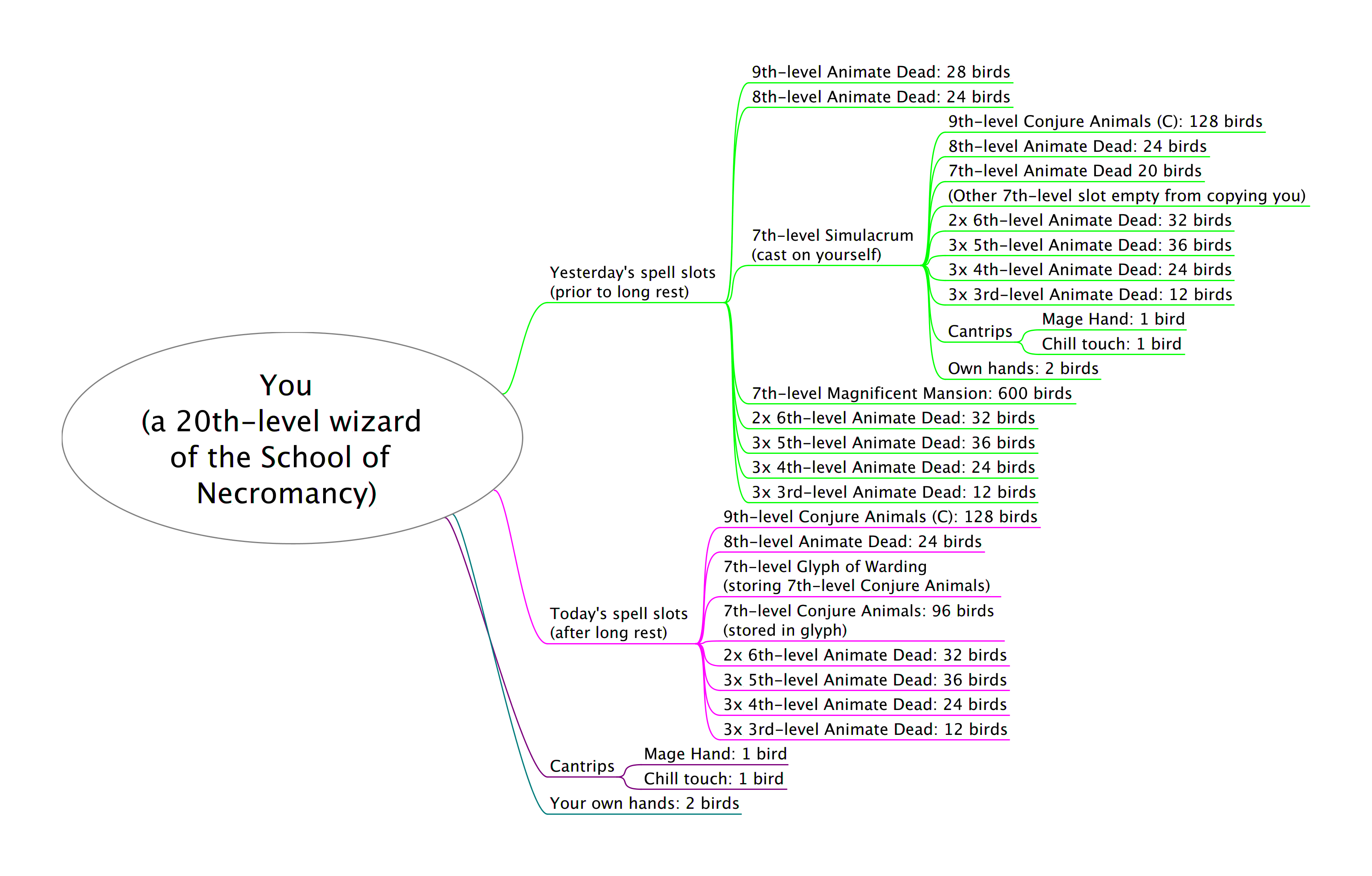 Let's start the day before the big event. First, you, a level 20 wizard of the School of Necromancy1, cast simulacrum on yourself, making a copy that is missing only a single 7th-level spell slot. Then you use your other 7th level slot to cast magnificent mansion, inside which you will serve dinner tomorrow. The mansion supplies you with 100 servants whose appearance you decide. Let's assume your imagination is limited to only creatures you know to exist, so you decide to make each servant look like a marelith with 6 hands (because if there's no limit then this answer ceases to be interesting).

With all your remaining 3rd and higher level spell slots, you head over to the local cemetery and cast animate dead. The locals may initially object, but I'm sure that once you explain how awful your mother-in-law is, they'll understand your need. Make sure to emphasize that you're only borrowing their ancestors' sacred remains, and they can have the corpses back tomorrow. Remember to check each corpse for 2 intact middle fingers before animating it! Once this is complete, you cast Leomund's tiny hut as a ritual in the cemetery and camp for the night with your simulacrum, taking a long rest.

In the morning, you awake refreshed and take stock of the 78 animated undead you created yesterday. Then, you continue the work you began last evening, using all your 3rd through 6th level spell slots and your 8th level spell slot, as well as all your simulacrum's 3rd through 8th level spell slots, to animate an additional 138 undead. (Did I mention you should do this in large city with an ample supply of corpses?) With all 216 animated corpses in tow, you return to your mansion to cast a 7th level conjure animals into a 7th-level glyph of warding. Your advance preparations are now complete. (Presumably the 100 servants in the mansion can handle the preparation of the meal itself, leaving you to focus on the important matters.)

When your mother-in-law arrives, you and your simulacrum each cast mage hand, using the hands to present your beautifully plated dish (and also ensuring you don't need to waste an action later casting mage hand once the action starts). When she takes a bite and makes her rude comment, your glyph triggers, summoning 24 flying monkeys.2 At the same time, you and your simulacrum each cast conjure animals at 9th level (using both your concentration), bringing the total number of flying monkeys to 88. Then, you and your simulacrum each use your next actions to move your mage hands into position, and your next actions after that to cast chill touch, and finally use both of each of your own hands to flip the bird at her (free actions on your turns), completing the springing of the trap over the course of 3 rounds (or 2 rounds for a Wizard 17/Sorcerer 3 with Quickened Spell).

So, let's get the final count of birds flipped:

Add these all up, and the total number of non-illusory hands (and feet) awaiting your bird-flipping command is 1392. For the sake of completeness, note that you will also be dealing up to 8d8 necrotic damage to your mother-in-law with the two chill touch spells, which adds some injury to this insult.

Since you still have your 1st and 2nd level spell slots left over, you and your simulacrum may as well spend the 4th round casting suggestion on your mother in law, suggesting that she cave to peer pressure and flip herself the bird. If she fails the saving throw, you can add 2 hands to the total, but this isn't guaranteed. Similarly, you might be able to use Charm Person to convince some of the locals to join the party.

With all of these monkeys and undead in your mansion, it's a good thing it will cease to exist in a few hours, because you do not want to clean up the aftermath of this event. Remember that you control the floor plan of the mansion. Make sure to design a dining room that can comfortably accommodate 369 creatures (although a high ceiling should be sufficient to accommodate the flying monkeys).

Oh, and don't forget to tell all the undead afterward to report back to the town for re-burial. Sure, they're still animated, but I'm sure the villagers can sort it all out.

1Credit to user ttolluz for adding in the School of Necromancy, whose Undead Thralls feature adds one additional undead humanoid per casting of Animate Dead.

2I don't have the exact stats for a flying monkey available, but I'm willing to make some assumptions about their ability to flip the bird.

As many as can fit in a 20' cube, depending on how small you want the hands

Simply casting major image (PHB, 258) will allow you to create an illusory creature of your imagination with as many hands flipping the bird as you'd like that can fit in the 20' cube.

You create the image of an object, a creature, or some other visible phenomenon that is no larger than a 20-foot cube.

The language above seems to imply that the major image is of a singular thing, but it be an object, creature, or some other phenomenon. Having multiple unconnected hands seems like it might not be allowable, so connecting to a creature removes that risk. However, if your DM allows major image to produce more than a single illusion, then the floating hand option remains.

And you can even have the arms/hands moving in a circular motion to highlight the bird flipping experience.

If you can cast it at 6th level, there's no concentration required and you can do this as many times as you have spell slots. (Thanks Ryan C. Thompson!)

In the World of Dreams, Countless Fingers are Possible

By use of the spell Dream you may go into a trance where you enter her dreams and "can also shape the environment of the dream, creating landscapes, objects, and other images". Unlike the typical illusion spell these created images are not confined to any set amount of space and it is hard to argue that it has to be any sort of natural environment or other actual occuring phenomenon, so you may speak to her in an endless sea of middle fingers inhabited by countless yous flipping her off.

Since you want to do it during her visit you will have to put her to sleep. The spell permits you to cast it and then wait for sleep so the one minute casting time can be dealt with in advance. Merely cast Sleep into a Glyph of Warding, enter the Dream trance, and wait for her to set off the glyph. You then have one minute to send her through a world of innumerable birds being flipped.

While the Dream spell assumes that sleep involves dreams it is unclear whether the one minute of Sleep would involve dreams as this is probably "unrealistic". In this case you will want to order her to sleep with Suggestion or Geas or some such then enter your trance. Using suggestion for example you just need to give her a reasonable course of action ("You look tired. You should take a nap."), and once she has gone to sleep maintaining the spell should be irrelevant. Wake her up when it is time for her to go. Whether you choose to induce Dream's psychic damage is up to you. Likely you will then want to greet her mirror imaged with the Bigby's hand, Mage Hand, etc. so that she knows that you actually caused her being flipped off during the dream rather than her simply having imagined it all on her own.

This tactic is precluded if she is an elf, warforged, or some other non-sleeping creature.

Set up 2-? mirrors that reflect each other and can be seen by the aforementioned MIL, and cast your images so that they are reflected in the mirrors.

To add to the answer of Ryan C.Thompson, if the Wizard is from the School of Necromancy (PHB, p. 119), he would add an additional zombie/skeleton per casting of Animate Dead (thanks to the 6th-level Undead Thralls feature), thus flipping 76 more birds (38 castings of Animate Dead).

When you cast Animate Dead, you can target one additional corpse or pile of bones, creating another zombie or skeleton, as appropriate.

Not the answer you're looking for? Browse other questions tagged dnd-5e optimization or ask your own question.

38
What is the Fastest a Character Can Move in One Turn?