Rolling 7 stats of "4d6, reroll 1s and 2s, drop the lowest number" and dropping the lowest sum in AnyDice

Rolling an individual (N)PC stat of 4d6, rerolling 1s and 2s, and dropping the lowest gives a modal average of 15 with a range of 9-18. The AnyDice code to produce the graph for that is simple enough (and there are multiple ways to code this):

What I'd like to do is roll 7 sets of these and drop the lowest sum (thus obtaining a standard 6 D&D stat scores, but specifically the highest 6 sums out of 7).

How might I tell AnyDice to show me how this affects the scores in contrast to a standard 6 rolls of 3d6?

Here's a simple program which tells us what the distribution of each individual stat (from highest to lowest) in your array is:

In order to generate a sequence of 7 rolled ability scores, we can simply use the function which generates one ability score and roll it as a die 7 times - hence 7d[highest 3 of 4d{3..6}]. Then, we can inspect the first six elements of that sequence to get the six ability scores you will keep, since sequences are by default sorted in descending order. The 7th score (7@ARRAY) is the lowest score and so we ignore (discard) it.

Here's a program which compares results from simply rolling 6 times 3d6 to your method of determining stats. As given it only shows the comparison of the highest score from each distribution, but I trust altering it to compare the other results is obvious enough (I have left them out to avoid clutter): 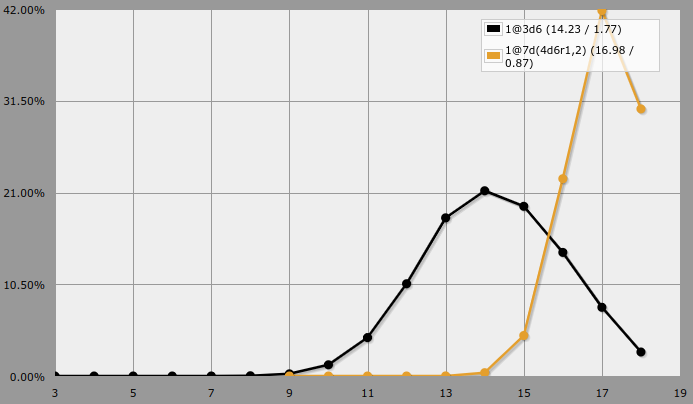 In this case we use a function in order to randomly select an index from the array. We have to do it this way because anydice expects an index to a sequence to be a number or another sequence (where it would sum the selected elements), so it balks if we try to directly index the sequence with a die by doing something like (1d6)@ARRAY. However, if we use a function which casts a die roll input to a number (INDEX:n), we can work around this limitation. The output in this case gives us the probability distribution of results we'd see if we randomly selected one of the first six ability scores in the sequence we generated.

Using this program, here's a graph which compares that to other methods of generating ability scores:

So we can see, for instance, that adding the extra step of rolling an array of seven scores and dropping the lowest bumps your average result up from 14.62 to 15.06.

5
Modelling rolling for stats in Anydice
5
How can I calculate the distribution of "roll 4d6, keep rerolling 1s and 2s, and drop the lowest die" in AnyDice?
12
How can I model this "Party Draft Pool" ability score generation method in AnyDice?
6
Rerolling and replacing the lowest result in Anydice
3
AnyDice formula for rolling 2d20 and dropping farthest value from 10
3
WoD in anydice: rolling for minimum number of successes
5
How can I use AnyDice to get the odds of a specific number sequence from rolling 3d10 and dropping the lowest die?
11
How can I use AnyDice to simulate rolling 6d6, and dropping the 2 lowest and 1 highest dice?
10
How can I calculate the sum of 2 random dice out of a 3d6 pool in AnyDice?
20
What are the odds of rolling specific ability score totals in D&D?