Which is better? Improved critical or extra damage die?

One of the players in my party wants to play a multiclass Barbarian/Fighter, and is on the fence regarding which Fighter archetype to choose. He is using a Greataxe (no dual-wielding). He wants to get the most DPR, and he is between the Champion and Brute (from UA). Due to RP reasons, he's not picking Battle Master, as that archetype implies the character studied martial discipline, and the player/character only want to hit things very hard.

With Champion he would get improved critical, which combined with combat advantage and two attacks can almost guarantee a critical hit per round.

With Brute, he would get an extra d4 on each hit, so although he won't be dealing crits all the turns, he'll be dealing a bit more damage.

One important thing: our group is using a house rule so our critical hits deal max damage + a regular roll (for example: a Greataxe deals 1d12+12+Str). The extra d4 would also be maxed for the crit.

With all that in mind, which option is better for dealing the most damage?

For a better picture: We are about to hit lv 4, and it's very likely that the campaign ends somewhere around level 10~14.
The character is a half-orc, so he already has a benefit when he scores a critical hit.
My friend and I discussed also which barbarian path should he take (he was between Berserker, that gives him an extra attack each round when he is raging, and Zealot, which gives him an extra 1d6+1/2 brb level as radiant damage for the first attack), and it's likely he'll choose Zealot (my character is a Paladin/Celestial Warlock, so their friendship can provide the RP background for that pick).

Take this answer with a grain of salt. This calculation does not take AC/hit percentage into account and sways the answer in favor of the Extra Damage Die.

The average damage rolls by dice are as follows:

The chances to crit are as follows:

Plugging these into the formula above, you get the average damages per attack:

I've used this anydice program to crunch some numbers on your problem and determine the expected damage on any given attack. I'd suggest looking at the "summary" view, in particular, to make it easy to compare results. The takeaway is that the expected damage will vary in favour of one archetype or the other depending on how hard it is to hit the target and what level of barbarian the character reaches (and hence how much brutal critical bonus damage applies to crits).

For the purposes of comparison, I've ignored the strength bonus to damage since that will always be the same and so cancels out, and I've also ignored attack bonus, so AC1 effectively means "always hits bar a natural 1", AC21 means "only hits on a crit", and AC11 means "50% chance to hit". On top of that I have assumed the character is attacking with advantage, i.e. by using Reckless Attack or similar. Here's a look at that output: 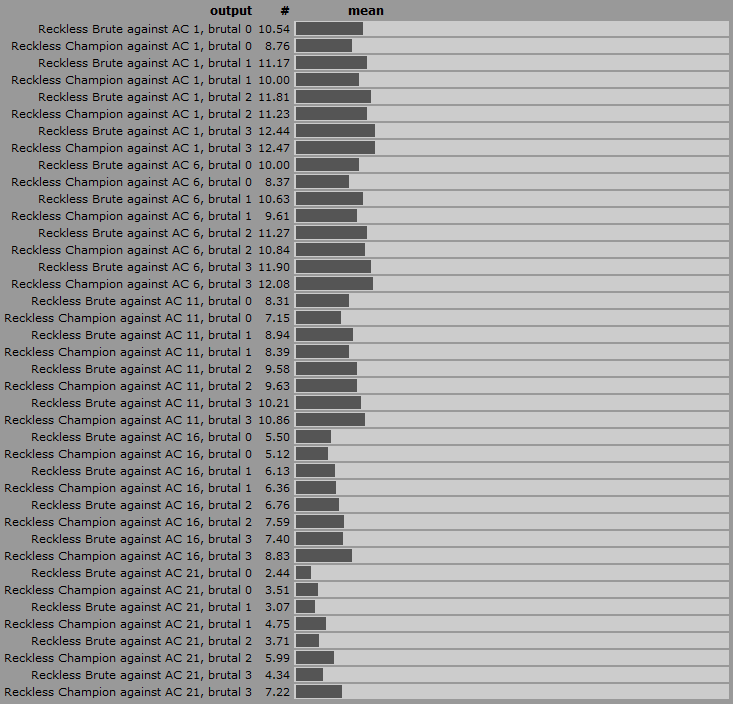 Basically, the harder it is to hit the target, and the more barbarian levels and thus extra damage dice from brutal critical, the more likely you are to be better off as a champion rather than a brute.

You'll be slightly better off as a Brute with low levels of Barbarian and slightly better off as a Champion with more levels of Barbarian. But honestly, there aren't huge differences in damage between the two archetypes at any point in this progression, and when you include the extra damage the character would actually do based on their strength and rage bonus, the relative difference becomes even smaller.

In your player's position, I would probably choose to take the Champion archetype, simply on the basis that even if the Brute would probably offer slightly better average damage for most of the upcoming level progression (assuming I normally fight things I have roughly even odds of hitting), it would feel far more satisfying to score critical hits against things more often and get to throw my extra damage dice for individual really big hits than it would to add a dinky little d4 of damage all the time. If the character is a half-orc, as well, their bonus critical damage from the Savage Attacks feature synchronises well with this, and makes the Champion archetype an even more appealing prospect.

It is notable, though, that your critical hit houserule makes critical hits more valuable than they would normally be and so advantage the Champion archetype. In the normal rules the Brute is the optimal choice in more cases as the Champion's damage falls off slightly. The math also changes a little in the Brute's favour if you don't assume constant advantage - though a reckless barbarian attacks with advantage more often than not, sometimes that will be offset by disadvantage.

This anydice allows you to explore for any levels, strength bonuses and target armor classes.

Unless the AC is extremely high (23+) the Brute beats the Champion.

Not the answer you're looking for? Browse other questions tagged dnd-5e optimization fighter critical-hit .

13
When a Battle Master fighter gets a critical hit and uses a maneuver that adds a superiority die to the damage, is that damage die doubled?
18
Is the extra damage die from Orcish Fury affected by crits?
20
Can a Barbarian choose which weapon die to add for his Brutal Critical?
3
Is this critical hit damage calculation correct?
4
Does the Brute fighter's extra damage die get added to the monk's Martial Arts and Flurry of Blows attacks?
16
As a half-orc Barbarian, is it worth it to dip some levels into the Fighter class?
0
Between the half-orc's Savage Attacks trait and the Elven Accuracy racial feat, which is better?
8
Do attacks that do a fixed amount of damage (rather than rolling a damage die) do extra damage on a critical hit?
3
Does the barbarian's 9th-level Brutal Critical feature deal one extra die of damage on a critical hit, or two extra dice?