This raises an additional question of why a "0" on a d10 in the context of a percentile roll is treated as a "0".

Is this simply to make the reading of the percentile roll easier, or simply to make it so a 100 wouldn't require an unaesthetic "90" and a "0" instead of the more visually-appealing "00" and "0"?

The game needs a way to roll 1 to 100 with equal chances, and no chance of getting zero.

Let's start by just looking at how we are set up to roll the results from 1 to 99, and then we'll get to the special case of getting 100.

Two problems initially: we have no way to get 100, and we have the possibility of getting a total zero by rolling "00" and "0".

Solution to both: count the "00" and "0" combo as 100, instead of zero. With this simple adjustment, we have exactly what we want: a 1-in-100 chance of getting all possible results from 1 to 100, and never getting a final zero.

Admittedly, it is a matter of convention

Understandably, you normally treat a "0" on a regular d10 as "10", and you could continue to do so even when using it in d100, such that if you rolled "80" and "0" and treat the "0" as 10, then you get 90. But game communities tend to converge on one common practice or another, and the one outlined above is the one that has taken hold. But technically, you could use either method, as long as everyone at the table understands and agrees.

In the old days, few players had two d10s to enable rolling a d100 all in one go (maybe because dice sets were more expensive relative to income back in the day). We'd roll our single d10 for the tens-place, and then pick it up and roll it again for the ones-place. This made the zero-substitution rule very exciting and suspenseful! If my initial one-die roll was zero I'd be thinking, "Dang, I probably will end up with just a 1-9, but I've got a shot at a 100!". And everyone around the table would be thinking the same thing, and would watch with tense anticipation what the second roll was going to be.

This dynamic added some fun to the game (that you don't "feel" when rolling two d10s), and might help explain why the method "stuck."

Reading percentile dice in this manner pre-dates D&D, and has been used consistently in the rules throughout editions of the game.

Percentile dice date back to at least 1963, when they were used in wargames by the US Naval War College to simulate percentage chances using a 20-sided die marked 0-9 twice, and rolling that two times to generate two digits.

These dice were adopted by wargaming hobbyists around 1971, with an early advertisement describing them as able to "throw numbers 1-100".

Gygax used them in Original D&D (1974) as actual twenty-sided dice, read 1-20. It was common to color half the numbers with a crayon, presumably reading one 0 as 10 and the other as 20. They were also used in their original function as percentile dice, as in the Monsters & Treasure rulebook where magic item charts clearly place a result of 00 after 99 (e.g. Shield +3 on a roll of 98-00), i.e. 00 is used as if it represents 100 rather than 0.

Furthermore, fighters with an 18 strength are entitled to roll percentile dice in order to generate a random number between 01 and 00 (100) to determine exceptional strength ...

When the rules say to roll "percentile dice" or "d100", you need to generate a random number from 1 to 100. One way to do this is to roll two 10-sided dice of different colors. Before you roll, designate one die as the tens place and other as the ones place. Rolling them together enables you to generate a number from 1 to 100 (a result of "0" on both dice is read as "00" or "100").

The D&D 3.5 Player's Handbook, p. 5, gives a similar definition, this time accounting for the existence of newer ten-sided dice marked 00-90 for specific use as percentile dice in D&D and percentile-based RPGs:

Hi, Original D&D player here. While Quadratic Wizard is mostly correct, the 00 = 100 was in the Original D&D game(1974, TSR, three little brown books, unless you go back as QW did to the Naval War College); the game's tables show that 00 was highest percentile roll.

The original 20 sided dice, the icosahedron, arrived with two of each number opposed to one another. Here are my oldest surviving dice (yes, the pointed d4's were original, but those are gone thanks to a few boxes being lost in a Navy move) and the yellow set of oddly shaped dice didn't have a d10 - d10's weren't yet common. 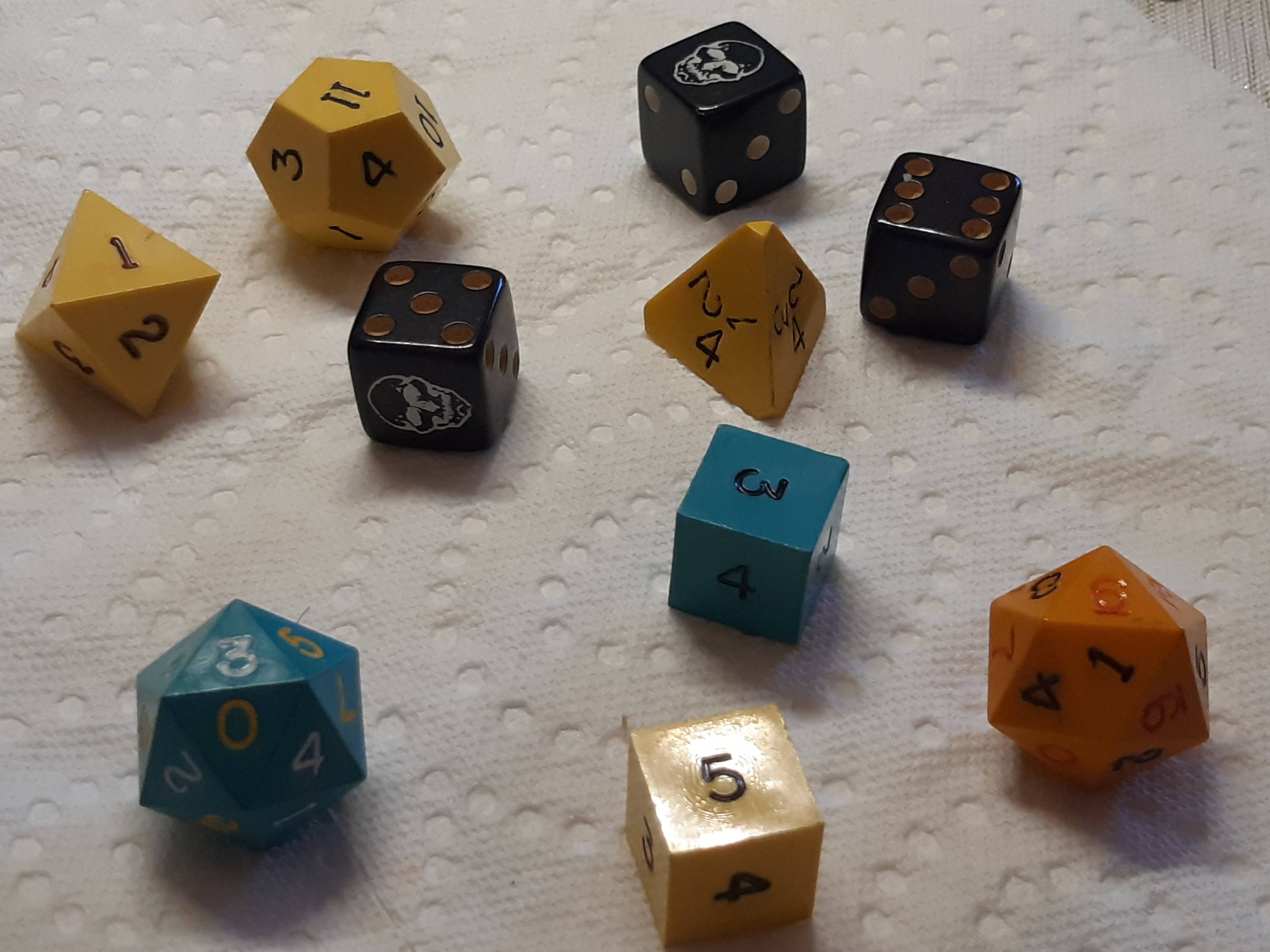 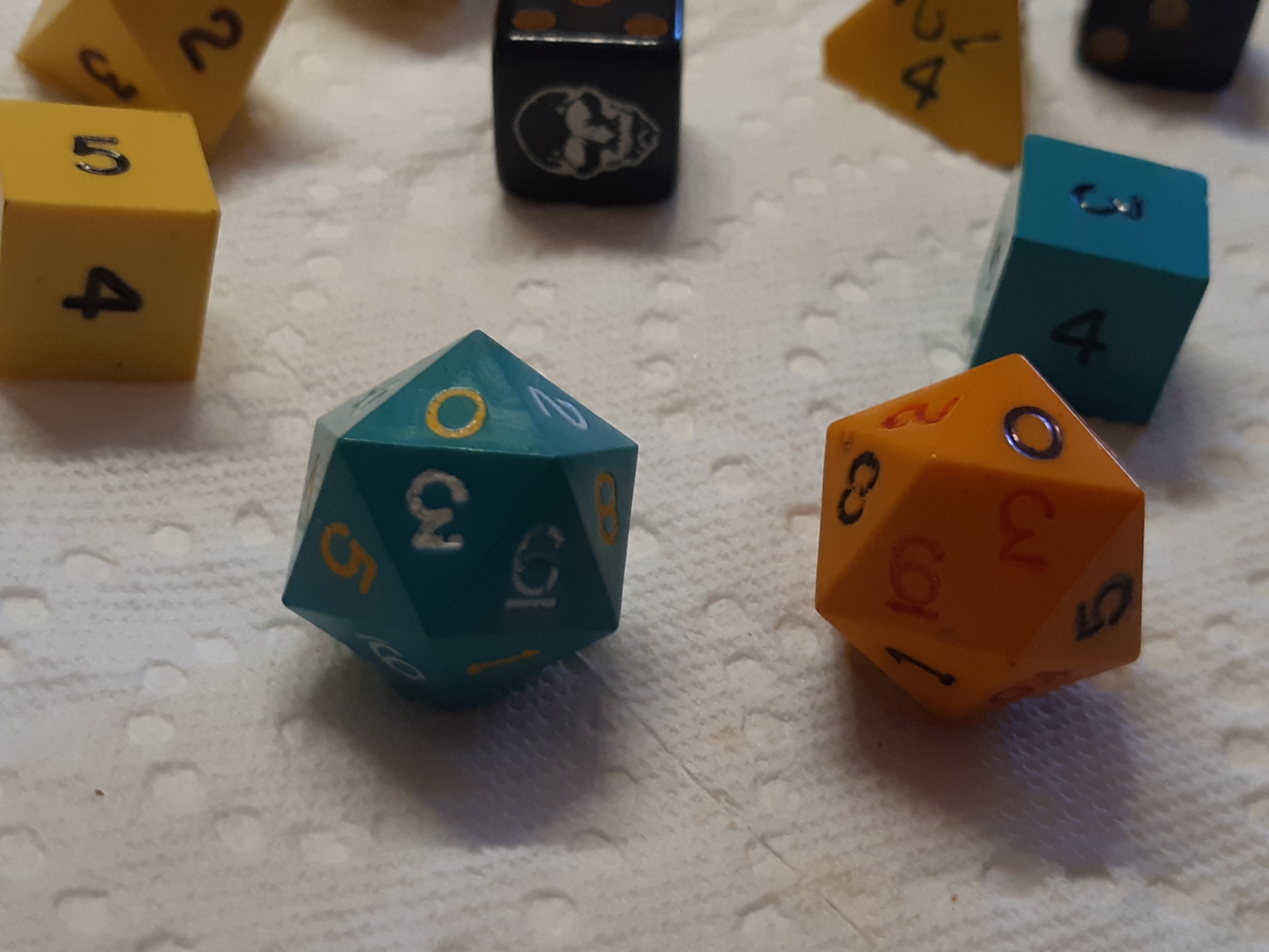 And here is an up close of the d20s with the other 0 showing on each. 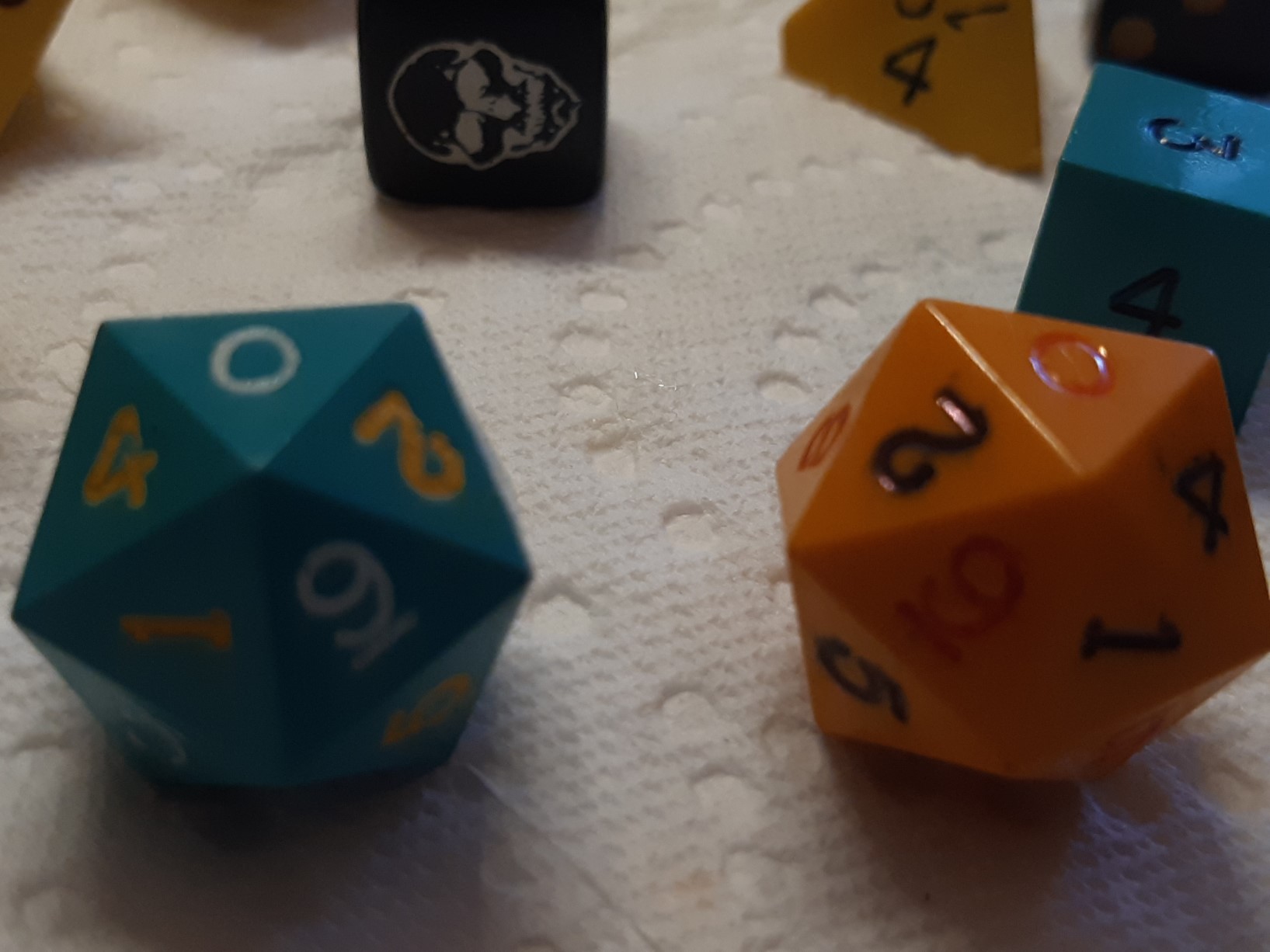 When rolling two icosahedrons, you had 2 chances in 20 for each die to come up with any number from 0-9. You picked one d20 as the high and one as the low (in the above pair the blue was high and the yellow was low when I rolled them), or, if you had only one d20 like us cheap/poor high school kids did in 1975, you rolled twice with the first one being the tens digit and the last on being the ones digit. A 0 and then a 4 = 4; a 7 and then a 6 = 76.

... and (3) The game tables showed that 00 was highest percentile roll

None of the tables in D&D, Original (1974), had a lower value than 01. We could not create "100" with a two die roll unless we made 00 be one greater than 99. So we did, and so had the game's designers. It was obvious that 00 was the highest number, since that is how the tables were set up in the Original Dungeons and Dragons game.

When the change arrived for many gamers - 10 sided dice began to show up a lot at game store - some people began to use two d10s to roll percentiles, even though some of old school sorts (like me) never saw the need. Then, when d20's started coming with 11-20 already marked on the dice, we began to see the utility of using the 2d10 for percentile rolls.

As Quadratic Wizard pointed out, they did a better job of explaining this in the AD&D books, but the practice had come with the publication of the original game.

1 FWIW, I don't recall ever seeing a d10 before 1980, but that may be a result of where I lived more than if they were available or not. We didn't have the internet back then.

If you forgive me getting all mathematical, it's to get percentages right with "x or less" success.

Since they are called "percentage dice", we intuitively assume that if we have to "roll a twenty five or less" that should correspond to a 25 percent chance of success. But that is not true if zero counts as zero - 26 of the outcomes are less than or equal to 25, so it's a 26% chance of success. We could work round that by saying that 25 counts as failure, but that just seems wrong to everyone.

This is especially true of "roll a 99 or less" which we expect to have a 1% chance of failure, but which will always happen if 00 counts as zero.

So to keep things how we expect them, we make 00 count is 100. I doubt it was thought through in that detail, but it does work out.

In support of other answers:

In any other context outside of a percentile roll...

Note that in traditional wargaming, pre-dating D&D (like, 1960's), such dice were only used for percentile rolls. Specifically, pairs of icosahedrons (d20's) with single digits on each face (0-9) were acquired from scientific-tool manufacturers and used for the purpose of switching games from awkward d6-bases to d%-bases, by which one could directly implement real-world statistical reports (this is even before d4's, d8's, d12's were used, too).

Is this simply to make the reading of the percentile roll easier...?

In short: Yes. Since at the outset the whole point was to be reading a pair of digits in every case, the most straightforward reading was taken, and no one would think to create an extra operation by reading the tens-digit differently from the ones-digit, and adding an extra addition operation. (The only exception being how to identify "100", for which the obvious "00" was used.)

You might want to watch this excellent video by Jon Peterson on the history, manufacture, and how to identify different brands of dice from the 1970's. Note that every manufacturer was only making d20's with 0-9 digits twice for this purpose, until TSR did something different in 1980.

Bringing us to your delightful question. A roll of 00 and 0. It leads us to a very, very little backstory that might be interesting to those of you who didn't live through it.

Anyway, one of the decisions they made when creating Advanced Dungeons and Dragons - as was noted in a previous but with less detail - was this:

Rolls from 1 to 100 are more interesting than rolls from 0 to 99, which are kind of mathematical and less like playing a game. So, they decided to make a roll of 00 and 0 stand for 100 instead of 0.

Not the answer you're looking for? Browse other questions tagged history-of-gaming dice or ask your own question.

33
What was Braunstein, and why was it important to the beginning of the hobby?
13
Most faithful way to convert a d20 base roll to a d6 base roll?
18
Why Does Spellcasting Have Levels?
31
How do I read 2d10 as a percentage?
5
Help with probability for a complicated dice pool mechanic
54
How to approximate rolls for potions of healing using only d6's?