Odds of rolling the same results twice on advantage rolls

I know that this has probably been answered before, but I couldn't find any specific threads on it.

This happened in a tabletop game recently, where all dice rolls are rolled with advantage anyways because of how the VTT system works. 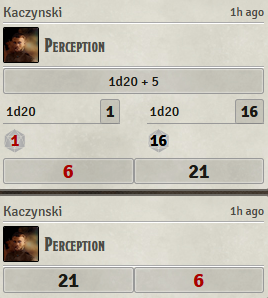 The other answers have made a mathematical error. They neglect the possibility of rolling pairs. You can roll a 6 and a 9 as 6,9 or as 9,6, but there is only one way to roll a pair of 6s. This slightly lowers the probability of rolling equivalent results twice.

The probability of not rolling a pair is 19/20, and there are 2 outcomes out of 400 possibilities where the second set of dice match the first if the first is not a pair.

Assuming order doesn't matter, as in your photo...

Odds of getting those exact same two numbers in a row (maybe in different orders, maybe not)?

Odds of just getting the same two numbers in a row, disregarding order?

Or are you asking what are the odds two rolls with advantage have the same end result for the roll?

No idea. But now I want to know.

Edit: I went and figured it out: I'll spare you the math, but there's roughly a 1/15 chance of getting the same end result twice when you have advantage

The current accepted answer is part right in mentioning pairs not being counted twice, but there is a flaw in the original assumption/setup so I am giving my own anawer.

Edit: Original answer was completely and entirely wrong in regards to the OP's question. I made a gross mistake via mental detour in my thought process and answered a question that wasn't there. I wasn't sure whether to repost an answer or edit this.

That applies in your case, but doesn't apply globally, as user2357112 discuses in an answer.

But hold on. Why is 16 special? 16 is only special because the first roll was 16. Hence we have a fallacy. You only consider the second one special because it matched the first. But this condition could have happened with any first number!!!

Not terribly remarkable, and even less remarkable for an advantaged 20 (almost 1 in 10). Higher numbers are more probable; that's what advantage is all about.

However if we let go of the 16, since it isn't special, let's look at your core question. What are the chances of rolling two consecutive same-numbers? Without advantage, that's easy: 1 in 20. (as said, the first number is anything; the second simply matches it.) With advantage, it gets more complicated, but also more likely, since high numbers are more probable than low ones.

Not the answer you're looking for? Browse other questions tagged dnd-5e statistics advantage-and-disadvantage or ask your own question.

11
Advantage on damage rolls - is it still balanced?
28
Dice Rolling Method Fairness
11
How can I model this “Party Draft Pool” ability score generation method in AnyDice?
7
By asking my players to match my roll, am I making their checks harder?
5
Is it still a binomial distribution when rolling dice with different probabilities that must be met to count a success?
3
Disadvantage/adversity dice pool mechanic that knocks dice greater than 1 out of the pool and adds 1s to it
4
Modeling a system where you roll Xd20 and take highest, plus the second highest if the first one is a critical, etc