What are the official opposing schools of magic?

I understand that, in some editions of D&D, there has been this concept of opposing schools of magic, and that specialising in one school may prevent you from learning as another (in the context of wizards, that is).

However, I am only familiar with 5e (which doesn't include this notion of schools of magic opposing each other such that they prohibit learning from another school) and NWN2 (which seems to be arbitrary and fixed; for example, specialising in Abjuration prohibits Conjuration, but specialising in Evocation also prohibits Conjuration! How does that make any sense?), so I do not know where to look to learn of the "official" opposing schools.

Looking online gives me a bunch of contradicting information, ranging from pictures of schools arranged in different orders from one picture to the next (so the opposite of Abjuration in one picture is different from the opposite of Abjuration in the next picture; so which one is correct, then?) to forums talking about choosing which schools to be prohibited from, which goes against this notion of there being a fixed arrangement of opposite schools.

Have I completely missed the point here, or is there an "official" arrangement of the schools of magic such that specialising in one prohibits its opposite?

Note that if this question makes most sense in 3.5e or something, the reason I've tagged it dungeons-and-dragons is because I don't know enough outside of 5e to even know what edition I'm talking about. So if the answer would be different between editions, I would ask that an answer points out these differences if it is realistic to do so.

It changes between Editions

But the standard idea of "Opposed Schools of Magic" only exists in 2E. Let's walk through them...

In 1E, there were no restrictions on schools of magic. There was a sub-type of "Magic User" called an "Illusionist" that had access to a slightly different battery of spells, but beyond that the idea of specialization was a non-thing.

This is where the idea of Opposed Schools of Magic come from. On Page 45 of the AD&D2E PHB Revised, we get the following info...

First, we get a diagram showing all of the schools as they relate to one another. This is a screenshot I found of the exact image: 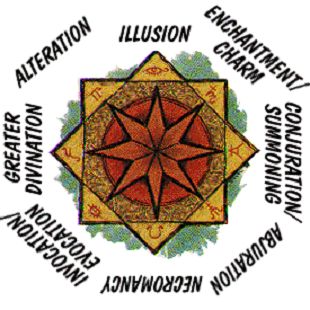 Then we get the following blurb of text

Specialist wizards have advantages and disadvantages when compared to mages. Their chance to know spells of their school of magic is greatly increased, but the intensive study results in a smaller chance to know spells outside their school. The number of spells they can cast increases, but they lose the ability to cast spells of the school in opposition to their specialty (opposite it in the diagram).

Opposition School(s) always includes the school directly opposite the character’s school of study in the diagram. In addition, the schools to either side of this one may also be disallowed due to the nature of the character’s school. For example, an invoker cannot learn enchantment/charm or conjuration/summoning spells and cannot use magical items that duplicate spells from these schools.

So, given that...lastly we have a table telling us what all of the opposing schools of magic are.

So...it's complicated and there's no 'simple' rule managing it, just a table to memorize.

Spell Specialization was changed for both 3.0 and the 3.5 revision

The more difficult a school is to master, the more one must give up in order to specialize in it. Some schools only require that a specialist give up one other school, while others might require the giving up of two or three.

Following this is a list of the Spell Schools and the complicated rubric you could follow to determine what your prohibited schools were. This gave you more choice in the matter, but was even worse than 2.0 when it came to "memorize this" because it didn't even fit tidily into a table. Essentially, when you picked your specialization, you were given a list of options for which schools (and how many) you could be prohibited from using. As before, let's go through your options for 'prohibited schools' one at a time.

In Third Edition's 3.5 revision, Specialization changed again. This time, 'Opposing schools of magic' is not considered, vastly simplifying matters--instead, the rules on Page 57 of the 3.5E PHB look like so:

Specialization allows a wizard to cast extra spells from her chosen school, but she then never learns to cast spells from some other schools.
[..]
The wizard must choose whether to specialize and, if she does so, choose her specialty at 1st level. At this time, she must also give up two other schools of magic (unless she chooses to specialize in divination; see below), which become her prohibited schools.

And just to cover the Diviner note...

Unlike the other specialists, a diviner must give up only one other school.

So, in 3.5E, there aren't actually opposing Schools of Magic. Instead, your character chooses to focus on one school of magic, to the exclusion of two other schools of your choice.

School Specialization does not exist in 4E.

School specialization made a return, but as Sub-classes, as seen on Page 115 of the 5E Player's Handbook

When you reach 2nd level, you choose an arcane tradition, shaping your practice of magic through one of eight schools: Abjuration, Conjuration, Divination, Enchantment, Evocation, Illusion, Necromancy, or Transmutation, all detailed at the end of the class description.

There are no 'opposed' schools of magic, and you do not lose access or benefits from other Schools by picking one to specialize in. Though it is, perhaps, worth noting that 5E is the first edition to force a Wizard to specialize in a school. In all prior editions that included specialization--specialization was optional--you could always choose to be a Generalist Wizard who had not focused their studies.

Fixed opposition schools only existed in 2e; prior to that, there was no school specialization, 3e had the specialist choose their opposition school(s), and 4e and 5e simply give unique class features to specialists. Per this forum post, even in 2e, schools didn’t necessarily have precisely one opposition. The schools were arranged in a ring, so directly across was opposing, but sometimes that school’s neighbors were also opposing.

The forum post supposes this was done for game-balance reasons.

Anyway, the forum thread here is explicitly about how these oppositions are often arbitrary and don’t make a whole lot of sense. That’s because this scheme was developed and imposed after the fact; the schools were originally developed without any such opposition in mind. So bear that in mind if you want to run with this: there isn’t really a great way to do it.

AD&D 2e, where this started1: eight schools and opposition schools

While there are technically nine schools of magic in AD&D 2e, it boils down to the eight that we have in 5e since Lesser Divination is / was usable by all wizards with no restrictions. (Read Magic, Detect Magic, etc). (PHB, AD&D 2e, Magic, and The Complete Wizard's Handbook). My translation from AD&D 2e to 5e terms follows, so that I can make the table applicable to your Red Wizard question.

With that in mind: the oppositional schools look like this:

You will note that Divination only has one oppositional school, while Illusion has three. The "why" on that is doubtless covered in a Dragon Magazine article somewhere, but I think that's beyond the scope of this Q&A.

1 And ended, since 3.x approached specialization a bit differently. WotC seems to have found (as many players did) that the oppositional schools approach didn't work particularly well.

Not the answer you're looking for? Browse other questions tagged dungeons-and-dragons magic or ask your own question.

17
Which school of magic is Mordenkainen most closely associated with?
7
Is my Red Wizard prestige class for 5e balanced?
3
What is the difference between an Artificer and an Enchanter?

24
How to Reconcile the MERP/RM High-Magic System with the Low-Magic Middle Earth Setting?
12
Is it unbalanced to change the opposition schools in AD&D 2nd edition?
4
Dual-School Spells for Advanced Learning (Dread Necromancer)
7
What do the different “schools of magic” refer to?
11
Why, from a lore perspective, are druids the only class who can cast the Flame Blade spell?
17
Which school of magic is Mordenkainen most closely associated with?
3
Are there examples in lore of a dragon learning new spells like a wizard?