Is there an easy way to know what edition a World of Darkness sourcebook is?

I've recently started getting into World of Darkness and I'm realizing there are 5 different editions of sourcebooks:

Is there an easy way to know what edition a sourcebook is without having to look it up?

Like can you tell what edition it is by looking at the cover?

There's 3 relatively easy ways to identify what edition our products are from:

DriveThruRPG to the rescue as we can see the trade dress for the various lineups in the logos of the collections. As you easily see, the general trade dress of the logos altered between editions, sometimes with only minor changes and not all books in the same series have the same Trade dress. Often the better distinguishing is the publishing years and to which system it belongs, as the version jumps happened shifted to one another.

The fans over at RPG.net have managed to sort pretty much every book into the correct edition and hold the publication year as well as the Impressum for all of them on file, and for some, they have even print run sizes. Atop that, there are dozens of reviews of the books, making them an excellent source to sort your books and to find out if a book might be interesting for your collection.

Generally speaking, the first edition encompasses the first 2 years of a system, but this is only true for the first three systems as the latter two had more or less only about one and a half years before 2nd Edition struck. So 1st Edition Vampire was published 1991/92, Werewolf in 1992/1993, Mage in 1993/1994. The first Wraith books came late 1994 and Changeling has a 1995 installment when it was published as the final installment of the (first edition) storyteller system.

In the early days, the Logo for White wolf was also quite different from the later years, as seen in the first logo, but by 1993 swapped to the logo we know. White Wolf resides in Stone Mountain until 1994, 1995 shows the first books using the Clarkston address.

Note that the Werewolf logo is green on the core book but shifts to a brown-red on the supplements. 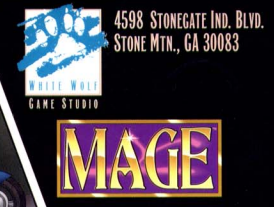 Vampire stared with the 2nd Edition still in 1992, Werewolf in 1994, Mage in 1995. Wraith came in 1996 using a quite similar trade dress to before (see below) and Changeling followed 1997 but didn't alter the trade dress safe for the simple addition of "second edition" in a black edge on the front cover of the core book.

The WoD has a logo of its own now that shows up repeatedly, but not always. All of 2nd Edition has the Company listed under the same address in Clarkston, a suburb of Atlanta. Note that there are some rare 1997 prints using Atlanta as the city name - T.J.L. owns a 1997 first-print of Changeling 2nd Edition like this, while his 2000 reprint shows Clarkston.

Vampire's subline has a different font - no longer rounded but a Serif style reminiscent of Times New Roman but the main line is exactly as 1st edition. Werewolf has a red font between bars now and has a totally different font that is no longer italic and more erratic (claw-made) in style but with a yellow outline. The Mage logo is dimmed in color or (later) starting to go without a cartouche, but the title is not decorated otherwise. The Wraith Logo no longer fades out at the lower end but has a solid outline.

Changeling has no easy to spot alterations in trade dress, so I suggest to rely on RPG.net and the location of the company to identify the edition here. 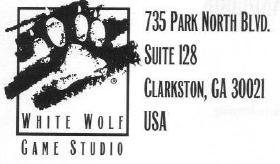 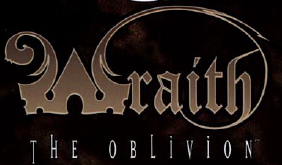 The Revised Edition started 1998 with Vampire, but in the first year might still use 2nd edition trade dress (see abo, 2000 with Werewolf and for Mage in 2001. Wraith was killed off and replaced by Demon: The Fallen and Hunter: The Reckoning as well as Mummy: The Resurrection. Kindred of the East was using the Revised rules set too but is a bolt-on to Vampire.

Changeling doesn't seem to have been published with Revised Edition rules but for a tie in into Time of Judgement.

No book belonging to Revised Edition was printed after 2004.

However there are some pdf/print on demand only releases of Revised books that were made as hype for the, then upcoming, Mage 20th anniversary edition in the shape of the 2013 Technocracy books, which also featuried Onyx Path Publishing on the covers and inside, but use otherwise the revised trade dress and ruleset.

Vampire has a totally different font for the logo, the subline being integrated into it with a font similar to the title. Werewolf has lost the yellow outline around the brand logo. Mage lost the Cartouche around the Logo and instead features decorations in the lower half of the text. 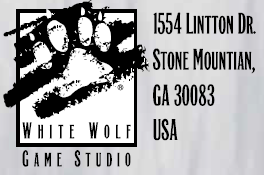 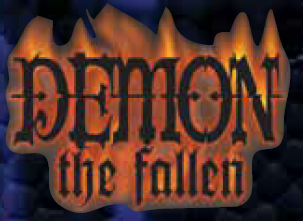 The 20th Century Edition uses a style reminiscent to the 1st and 2nd edition, however, all books have print dates starting 2011 - anything after is most likely this. The amount of books per splat is relatively small, but each one is very thick. Vampire and Werewolf are complete as of summer 2020, Vampire having started their 5th edition while Werewolf is still in the works, the other splats have some books still coming out, Wraith 20 is still in the making. A complete listing of the books can be got from DTRPG using the appropriate system tags, for example for V20, V20:DA, W20, M20, Wr20, C20.

The White Wolf Logo is without text, and there's an accompanying Onyx Path Logo always. The Trade dress makes it usually VERY clear that it is the 20th Anniversary version.

At the time of this writing (July 2020), the 5th edition is (still) exclusive to Vampire. It is published since August 2018. The Trade dress has a small, red circle with the white inscription WoD in the lower corner with no surrounding frame as a replacement for the old WoD logo. 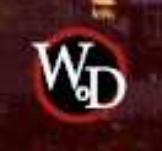 The lettering of the system is all capitals Vampire between two lines, using Friz Quadrata—again a font not used previously. The Masquerade in all capitals below the lower line, this time the same font as the title.

The typeface of the trade dress changes from edition to edition, so one way to tell is by looking at the letters used at the bottom of the cover in the line that says "A [x] Sourcebook for [y]" or the like. As an example, in Mage, the Abbess font is used for First and Second edition books, and Visitation is used for Revised.

2nd page of most WoD books > date of printing vs date of edition releases.

or on WW wiki:

As to the "by looking at cover" question:

In combination with wiki, a google image search of the "ibsn" listed on wiki for cover of book in question

This LINK is the CoD or "Chronicle of Darkness", It lists every date of publication/edition & would be the source I would quot, So I feel linking it is more direct

Note that "Paradox Interactive" now owns the "WoD" (2015 to date of this edit) with stated plans to (re)release rules under "One World of Darkness" unifying rule set.

I take this to mean 2nd edition is the superseding-ly "Current" rule set for the WoD (now CoD), until a "unified system release"

Below is the most current IN PRINT release I could locate:

The Huntsmen Chronicle - The second edition of Changeling: The Lost. A game of bittersweet truth. Released in January 2019.

Not the answer you're looking for? Browse other questions tagged world-of-darkness history-of-gaming product-identification books or ask your own question.

8
What happens when non-aggravated damage does not fit in the Health Chart?
7
Which book do I buy to get “New World of Darkness Core 2nd edition”?
10
Rite of Talisman Dedication, Containers & Pockets
5
Which Pathfinder books aren't Golarion specific?
17
About the Cosmology of Mage the Ascension
43
How do I know which edition of Dungeons and Dragons (D&D) the books I'm looking at are for?
9
What is the “5th Edition Adventures” book series?
4
Which published campaigns that melds D&D and paranoia was my DM talking about?