What was this role playing game from the 70s or 80s?

Does anyone know the name of the role playing game from around the 80s (or possibly 70s) that was sort of a Star Wars ripoff?

I don't think it was Star Frontiers, and I can't recall if the dice used was D10 or D20.

While I cannot hit all of your bullets, there was a game called Star Ace, published by Pacesetter Games from 1984 to 1986. There was combat and experience points, and human was a race option. Thematically, the game was similar to Star Wars in that there was an evil empire that the good guys opposed. In addition, the game featured a special ability called "noetics," which was basically Star Wars-style Force powers. The game only used percentile dice, two d10s.

The game had what were essentially light sabers--called "beam sabers" in the core rulebook. The jawa-like creatures you are recalling may be the Zoe--3-foot-tall aliens who wore robes like jawas, but always had their hoods down in the game's art work. Their heads were bulbous with large eyes. As for insectile aliens, I seem to recall they existed but cannot find them in the materials I have access to. They may have been in a different source book.

One of the most memorable visual features of the game materials was the player character race Kleibor, which looked like humanoid polar bears and featured very prominently in the game's artwork. If the game you are thinking of is Star Ace, then that will probably ring a bell. Other races were the Crystal Clones (very reminiscent of Vulcans) and Traka, who look a little like the stars of the Broadway version of Cats. 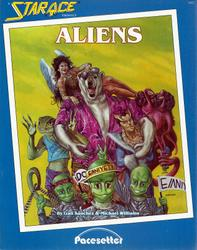 Another thing about Star Ace that might jar your memory is that the theme of a deck of cards was used. The four character classes, or "orders," equated to suits, so if you were a warrior type, you were Spades; the noetic specialist was a Clubs; Diamonds were stealth/social skill characters (rogues); and Hearts were tech specialists. Playing cards were painted on the starships in much of the artwork. 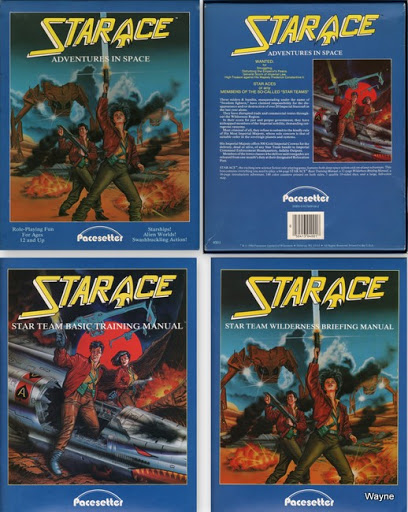 10
Which game system was the computer game HeroQuest based on?
23
What was this Magic the Gathering RPG I remember?
16
What game is this method of NPC generation using playing cards from?
7
Help me re-find this role-playing story
14
Help me identify this 1980s book about role-playing
12
What was this 80s book about RPGs?
8
Looking for a non-fiction book on RPG gaming from the late '80s
11
What was the name of this Werewolf band?
7
What was this RPG from the 1980s that incorporated plot points and a flowchart?