Line of sight, parallel 5ft obstacle between player and enemy

One of my players got frightened by a Boss after being hit by a wrathful smite, and he's trying to put himself between a 5ft diameter and 10ft tall pillar and the Boss enemy.

E being the Boss enemy, and P being the Player. Black square is the pillar. On the left image, can the Boss still see the Player to keep the frightened status going? 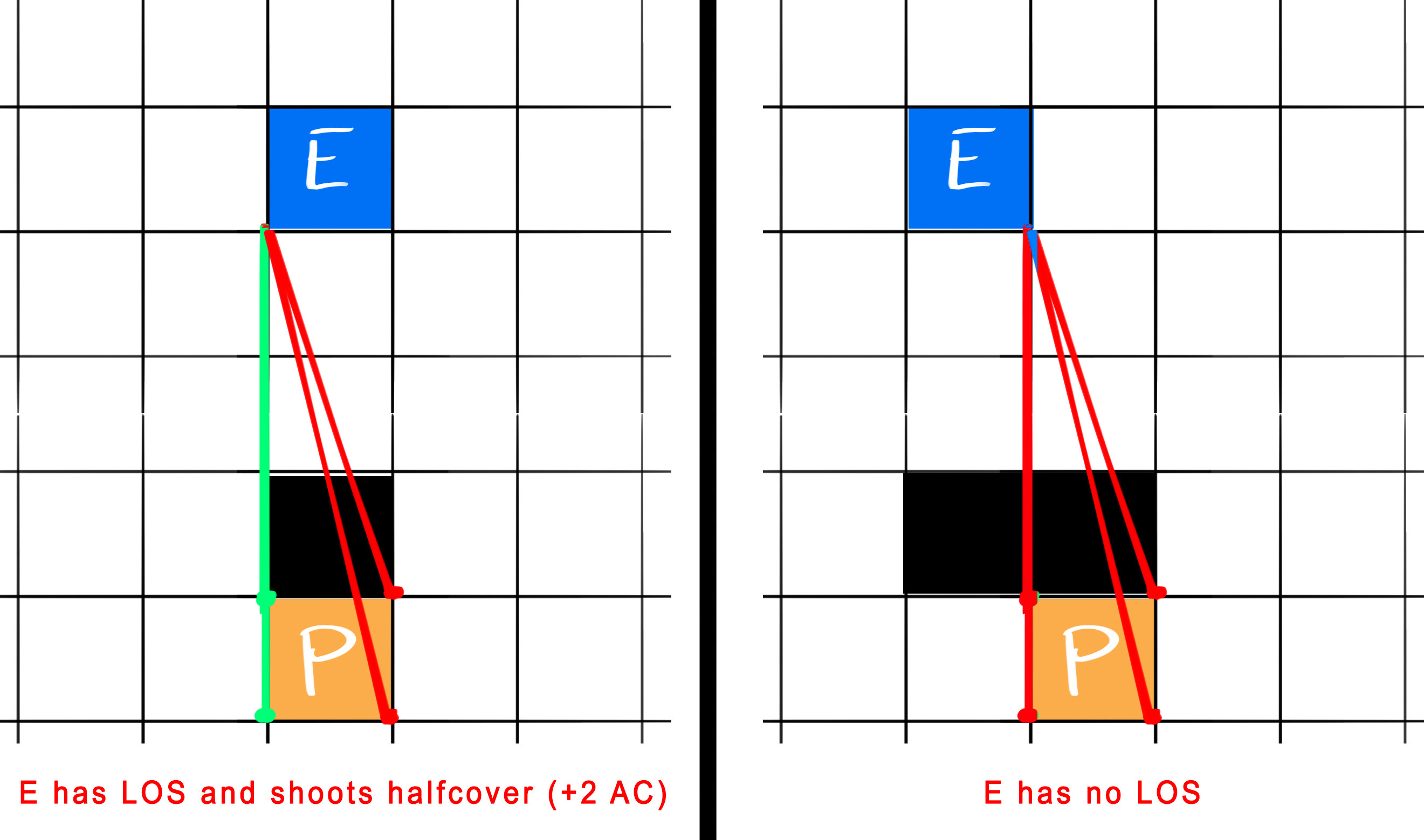 Line of Sight is not the same as Cover and whether or not there is Line of Sight depends on the specifics of what the object is.

A creature's space is the area in feet that it effectively controls in combat, not an expression of its physical dimensions. A typical Medium creature isn't 5 feet wide, for example, but it does control a space that wide. [...]

A creature's space also reflects the area it needs to fight effectively. [...]

So even though the base of the mini might take up the full 5ft square, the creature on the base doesn't. As a result, it is possible for a creature to have half cover, depending on positioning, but no Line of Sight to the creature.

[...] pick a corner of one space and trace an imaginary line from that corner to any part of another space. If at least one such line doesn’t pass through or touch an object or effect that blocks vision — such as a stone wall, a thick curtain, or a dense cloud of fog — then there is line of sight.

Cover on the other hand (for a grid of squares) states (emphasis mine):

So for Line of Sight, the lines to the creature need to not touch an object, while for Cover the lines need to not be blocked by the object. Whether or not it "touches" the object will of course depend on the nature of the specific object.

So, if in the first example the pillar is a 5ft square block of stone, then your determination is incorrect. There is no Line of Sight to the creature and they have half cover.

If instead it is a 1 ft wide pillar that the PC is behind, then there is Line of Sight to the creature and it has half cover.

Wraithful Smite inflicts the frightened condition on a creature:

[...] if the target is a creature, it must make a Wisdom saving throw or be frightened of you until the spell ends. As an action, the creature can make a Wisdom check against your spell save DC to steel its resolve and end this spell.

and the frightened condition states that the creature:

[...] has disadvantage on ability checks and attack rolls while the source of its fear is within line of sight.

Wraithful Smite ends after the first of:

Importantly, however, the second bullet point of the frightened condition is still in effect (regardless of Line of Sight):

The creature can't willingly move closer to the source of it's fear.

The player can position themselves so as to break line of sight with the boss.

The spell description for Wrathful Smite says your player

must make a Wisdom saving throw or be frightened of you until the spell ends.

As an action, the creature can make a Wisdom check against your spell save DC to steel its resolve and end this spell.

It sounds like your player failed their initial save. The Frightened condition specifies that a player

has disadvantage on ability checks and attack rolls while the source of its fear is within line of sight.

So, if the player can break LOS on their turn, they can attack a different target without the penalties of being Frightened. Or, they could even attempt another save.

But, is a pillar enough to do that?

Your diagram shows that the square that the player is in is still withing LOS of the boss. However, let's remember that Player Characters are typically size Medium creatures. According to Player's Handbook, Ch 9: Creature Size:

Each creature takes up a different amount of space. The Size Categories table shows how much space a creature of a particular size controls in combat.

According to the provided table, a Medium (your player) creature controls a 5' by 5' space during combat. Does that mean that they physically take up an entire 5' square? Of course not. For a real life example, doors in your house or apartment are typically 32 to 36 inches wide. Pretty easy to hide behind, right?

Therefore, a PC can easily hide behind a 5 foot diameter pillar to break their LOS to the boss.

What does line of sight have to do with “keep[ing] the frightened status going?”

Whatever is causing the frightened condition will have its own rules about when it can be ended. As far as I can recall, there are no sources of fear that have breaking line of sight as a trigger for ending them.

Perhaps you are confused about the effects of being frightened, the first of which is:

A frightened creature has disadvantage on Ability Checks and Attack rolls while the source of its fear is within line of sight.

From that position, the player can break line of sight with the boss.

However, I would like to point out that the only time line of sight is relevant to the saving throw is when the cause of the Frightened condition is the Fear spell.

You project a phantasmal image of a creature’s worst fears. Each creature in a 30-foot cone must succeed on a Wisdom saving throw or drop whatever it is holding and become frightened for the duration.

While frightened by this spell, a creature must take the Dash action and move away from you by the safest available route on each of its turns, unless there is nowhere to move. If the creature ends its turn in a location where it doesn’t have line of sight to you, the creature can make a Wisdom saving throw. On a successful save, the spell ends for that creature.

As opposed to something like a dragon's Frightful Presence feature:

Not the answer you're looking for? Browse other questions tagged dnd-5e battle-map line-of-sight fear or ask your own question.