What demons are related to the demon lords Juiblex and Zuggtmoy?

Juiblex and Zuggtmoy are demon lords, and the 5e material I have access to include the Monster Manual, Mordenkainen's Tome of Foes, and Out of the Abyss. The Monster Manual doesn't have much to say about these two demon lords (at least not with regards to which demons might follow them), but from Mordenkainen's Tome of Foes (p. 150) and Out of the Abyss (p. 242):

Juiblex's principal lair is known as the Slime Pits. A realm which Juiblex shares with Zuggtmoy. This layer of the Abyss, which is also known as Shedaklah, is a bubbling mass of oozing, fetid sludge.

So they share the same layer of the Abyss (hence why I thought to ask about these two into one question; this can be split up into two questions if necessary).

Spawn of Juiblex. Alkiliths spring from the cast-off bits of Juiblex's hideous, shuddering body, then gradually become self-aware and set out to find their way onto the Material Plane.

So Alkiliths, at least, are related to Juiblex, but it seems that there are literally no demons with any relation to Zuggtmoy whatsoever.

As an aside, I get that these two demon lords are all about oozes and fungi respectively, and I expect that most of their time their "followers" or "thralls" will be related to oozes or fungi, but since they are demon lords, it seems strange for there to be no demons associated with them at all (Zuggtmoy specifically, since Juiblex apparently at least has Alkiliths), hence my question:

What demons are related to the demon lords Juiblex and Zuggtmoy?

Ideally I'd like lore from 5e where possible, but I'll accept anything from any edition of D&D. Since I imagine I might have already found everything from 5e, I'm hoping that, unless I've overlooked something, previous editions may yield more information on this.

Unlike those questions, I'm strictly only interested in demons specifically.

Book of Vile Darkness: some lore on Juiblex, nothing on Zuggtmoy

Using the answer from this question as a starting point, I looked into the Book of Vile Darkness (for 3e, not 4e like that answer says; there is a similar book for 4e, but it doesn't appear to contain very much about demon lords, whereas the 3e one does, so I assume that's what the other answer meant), and found this about Juiblex on page 134:

Juiblex, known as the Faceless Lord, is a loathsome demon of slime and ooze. Even most demons shun him, and the demon princes are said to refer to him contemptuously as the “lord of nothing.” He is among the weakest demon lords but is a terrifying foe nonetheless. He embodies many of the horrible abilities of various slimes, oozes, and puddings, and he commands impressive magical powers as well.

The domain of Juiblex is his by right of power—he has driven everything from the Slime Pits except the various slimes and oozes that teem there. Nevertheless, a few demons— hezrous, mainly—pay him enough fealty that they bring victims for Juiblex and his slimy brood to hunt and feed on.

So it seems that Juiblex isn't very popular among demons, and does tend to associated mostly with oozes, but in addition to the Alkiliths I found in my question, this suggests that Hezrous also associate with Juiblex.

Page 136 also contains a reference to a Herzou working for Juiblex:

Juiblex has many slime, pudding, ooze, and jelly “servants,” although none are intelligent enough to serve the demon lord willingly—except for one.

Darkness Given Hunger is the largest black pudding known. It was possessed by a hezrou demon at Juiblex’s command, and then an imprison possessor spell was cast upon the fusion, making it permanent. For centuries, the demon has dwelled within the pudding, and the two have truly become one in the foul depths of the Abyss. Now, Darkness Given Hunger is Juiblex’s main servant, helping patrol the Abyssal layer upon which they both dwell, looking for food.

However, I have found nothing on Zuggtmoy in this book.

Fiendish Codex I - Hordes of the Abyss: less lore on Juiblex, more on Zuggtmoy

This 3.5e book includes more lore on Zuggtmoy. The lore on Juiblex is pretty much the same as the above (except without mentioning Hezrou, so not of interest to this question), although it does include this in his stat block on page 67:

Summon Tanar’ri (Sp) Once per day, Juiblex can automatically summon 3d10 dretches, 1 hezrou, or 1 alkilith (Fiend Folio 46). This ability is the equivalent of a 9th-level spell (CL 20th).

So this confirms Alkilith (from my question) and Hezrou (from the above source) and adds Dretches to the list of demons associated with Juiblex.

The lore on Zuggtmoy says this on page 80:

Zuggtmoy has no fear of combat. Given the opportunity to smash and ruin living flesh, she rarely backs down. She is seldom encountered without a contingent of fungus monsters and vrocks, whom she uses as a buffer against melee fighters while she spends the first few rounds of combat casting [...]

And just above that on page 79, in her stat block:

Summon Tanar’ri (Sp) Once per day, Zuggtmoy can automatically summon 1d4 vrocks. This ability is the equivalent of a 9th-level spell (CL 20th).

So Vrocks associate with Zuggtmoy; there's also an image of an "arrow demon of Zuggtmoy" in that book, but I can't find any information about it outside of that picture's caption. An arrow demon appears to be a thing defined outside of this book in other 3.Xe material.

Here's the picture of the "arrow demon of Zuggtmoy" from "Fiendish Codex I - Hordes of the Abyss":

In addition, the Forgotten Realms wiki page on Zuggtmoy claims that she

with a reference to "Fiendish Codex I - Hordes of the Abyss", but I couldn't find where it was drawing this information from myself in that book.

Thanks to @KorvinStarmast for pointing me in this direction; this adventure module heavily features Zuggtmoy, but there are few mentions of demons in relation to her. However, I have managed to find the following:

I'm not familiar enough with AD&D to know what Types I-IV mean, but babau demons are at least listed explicitly, and there must be various other demons that are associated with her as per these "Types".

Furthermore, her stat block on p. 123 describes her ability to summon demons:

As in the previous quote, it mentions these demon Types and mentions the babau demon explicitly.

Dungeon Magazine #118 has a small section called "Demonomicon of Iggwilv: Juiblex, the Faceless Lord", which has a little information on page 7:

Pod demons gather in small colonies, herding oozes, while rupture demons of all sizes hide here and there.

However, I'm not sure what "pod demons" or "rupture demons" are, maybe this was more of a 4e thing...

Dragon Magazine #337 has a large section called "Demonomicon of Iggwilv: Zuggtmoy, Queen of Fungi", which mentions a demon called a Vathugu repeatedly, which is described in depth within this section as well. Page 52 offers this picture of them: 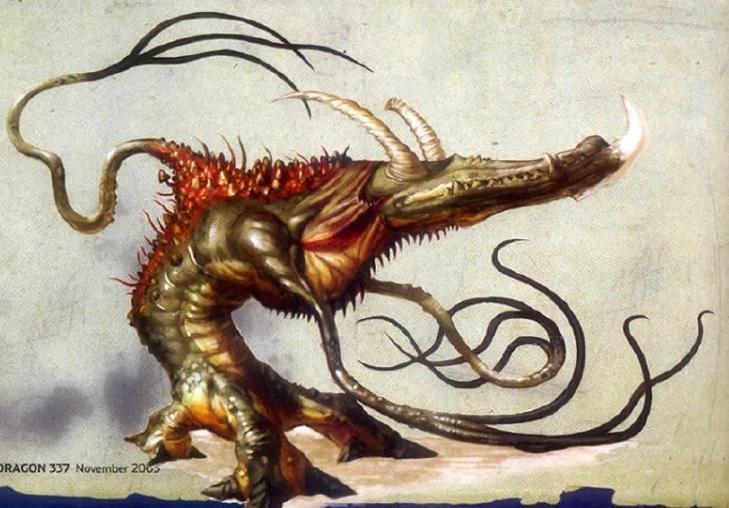 Page 54 gives us a short list of demons, though:

The inhabitants of Shedaklah [Zuggtmoy's layer of the Abyss] are mostly demons. Vrocks are common in the skies above, and vathugus and hezrous stalk the bogs below. Chasmes and rutterkin can be encountered with some frequency as well.

So that's Vrocks (these seem to be the favourites so far, besides fungi, obviously), vathugus, hezrous, chasmes and rutterkin, in addition to the vrocks and babau above.

For an excellent overview on Juiblex, I would suggest the Power Score Blog:

The site is not a dedicated or focused site for lore, but whatever catches the author's fancy he dives right into. You can find nearly every mentioned instance of Juiblex including sources to read up on here.

After reading up on as many of the mentioned articles that I could find or own, here is a synopsis of the ones I've read. (disregarding any already in your previous answer):

As far as specifically demons go, it does briefly mention that "Many flying demons can be see above his realm." but the rest of section mostly details different types of oozes, and treacherous terrain you'll find in his realm.

Fiendish Codex I - Hordes of the Abyss

There was a web enhancement released online that was a companion addition to the book (One and a half actually). 3.5 started doing that pretty often for each of it's books near the end of it's life. The site containing the official links seem to be long gone- but I still have PDFs.

Aspect of Juiblex Detailing a scaled back CR 8 version of Juiblex. It does specifically state that his aspects are often guarded by:

EL 13: Juiblex finds himself forced to make an alliance with another demon prince, and he sends an aspect of Juiblex along with a succubus for the negotiations. The aspect is guarded by two vrock demons and accompanied by two black puddings...

EL 8: Two aspects of Zuggtmoy make an attack on a cult of Juiblex and decimate many. The player characters encounter them afterward.

EL 10: An aspect of Zuggtmoy, a violet fungi, a shrieker, and a vrock guardian are sent to gather information for a new cult to the Lady of Fungi.

PCs attempt to root out the Demonic Ooze's presents in an infected holy-cave, where they might find:

Alot of updated 4e lore on Juiblex himself, some on Darkness-Given-Hunger, and his realm. It specifically points out that this version often shuns most minions, but then follows up with a few listings of additional Ooze-like powers which can be added onto any monster to create "Ooze Hybrids" versions of that creature, hinting that you can apply it to cultists or demons.

Not the answer you're looking for? Browse other questions tagged monsters dungeons-and-dragons lore religions-and-deities .

8
History of Hell and the Arch Devils and Demon Lords
3
How powerful does a demon need to be to leave a Cacodemon upon death?
1
Taking damage equal to the number of hit dice?
29
What are the good-aligned counterparts of Archdevils and Demon Lords?
6
What are all the creatures related to the Far Realm that have stat blocks in 5e?
8
What humanoid or monster races have a matriarchal society?
7
What demons are related to the demon lord Dagon?
2
What is the in-universe explanation for why succubi, who were demons, became "neutral evil fiends" in 5e?
9
Exactly how smart are Demon Lords? Demogorgon in particular
7
Specific published image of the Wolf-In-Sheep's-Clothing