Is there a way to turn an Imp into a ranged-attack familiar?

In the campaign I am playing I am a warlock//rogue level 3 and I spent 2 feats (Obtain Familiar and Improved Familiar) in order to get the maximum out of my familiar that is an imp. There are many reasons why I picked imp over other familiars but mostly it was due to roleplaying and my character's backstory purposes (Briefly, my warlock spent 10 years in hell and was given an imp as a companion) Here's a table that shows imp's stats; 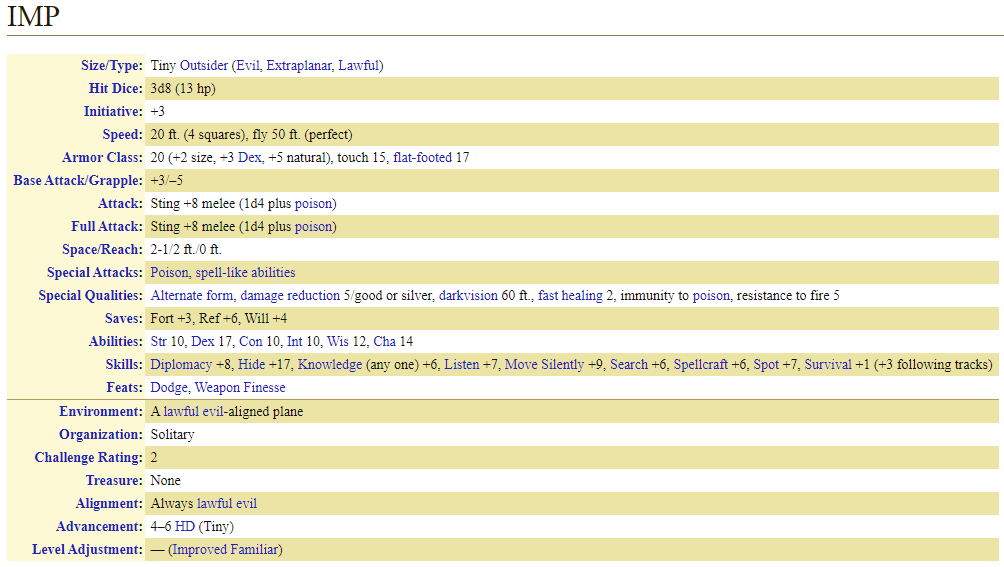 Only downside with my imp is it is very squishy and dies in one hit when he attacks. Since his reach is only 2ft, he is in danger most of the time whenever he is trying to attack. I was wondering possible if its possible for an imp to attack from far away? That way he can be at safe distance while attacking without getting in harm's way.

While the imp familiar will possess its master's base attack bonus if that's better than its own, the rogue//warlock's base attack bonus is no great shakes. Further, while its outsider type grants the imp proficiency with simple and martial weapons, its Tiny size makes melee extraordinarily hazardous. Also, its Tiny size means any weapons the imp wields won't deal much damage. (A bastard sword designed for a Tiny creature deals only 1d6 points of damage, and the imp's Str 10.) Finally, because the imp takes no class levels and itself gains no Hit Dice, it gains no new abilities except those its master grants, and the imp is typically stuck with whatever feats it possessed when it was summoned. (This is all in addition to the imp familiar's fragile hp, of course.)

In short, in this long-time player's opinion, having an imp familiar engage in conventional melee combat—charging at a foe, weapon in hand, for example—just isn't a good idea. Something untoward will occur, and the imp will die. And, when it does, unless it's the subject of the 6th-level Clr spell revive outsider [conj] (Spell Compendium 175)—the casting of which is a service with a price of at least 5,660 gp if it's available at all—, it'll be a year and a day before the rogue//warlock can get a replacement (see here). This can mean a lot of sessions with two useless feats on that character sheet.

If an imp with a conventional weapon is an absolute, a Tiny composite longbow (Player's Handbook 117, 119) (50 gp; 0.75 lbs.) is probably the best choice. Combine its range increment of 110 ft. with the imp's ability to fly and go invisible, that's like paying 1 cp per turn for a 5% chance of 1d4 points of damage out of nowhere. That's okay, I guess.

…But give that imp a wand, and that imp can still contribute during combat

Nonetheless, rogue//warlock is a good combination for weaponizing a familiar using unconventional means. (It's a combination beaten only by, like, two classes that each have an expansive spell list or by just one and a meldshaper.) A familiar shares its master's skill ranks, a rogue//warlock is going to keep topped off his Use Magic Device skill, and an imp's Charisma score is 15. This makes it so that the typical imp familiar of a rogue//warlock can—assuming the master's specced for it, and he should be,— fairly readily employ the Use Magic Device skill to activate a wand (DC 20). Might I suggest handing that imp a wand of minor image or scorching ray?

Note: I DMed a campaign that included a PC who weaponized his multiple familiars. (I've discussed Jalas here.) The campaign ran from levels 1 to 15, and Jalas was the only original left from the level 1 group at level 15. So, yeah, weaponizing familiars can work, but, to be sure, it's a risky and fragile strategy. Also, the Dungeon Master's Guide feat Improved Familiar (200) lists the imp familiar as available to a creature that possesses an arcane caster level of at least 7. A typical rogue 3//warlock 3 possesses an arcane caster level of 3.

As an Outsider, your imp is proficient with all simple and martial weapons, so the simplest way to make it a ranged attacker would be to give it a longbow. If your DM is okay with it, the imp should be able to apply its poison to its arrows, too. At that point, rather neatly, its attack with the longbow will have exactly the same attack bonus and damage as the stinger attack in its statblock, except with a range increment of 100ft.

One important caveat: to select an imp as your familiar using the Improved Familiar feat requires arcane caster level 7th, so unless you've gotten special permission from the DM (perhaps because of your backstory), the rules don't actually allow you to get an imp for another 4 levels.

Not the answer you're looking for? Browse other questions tagged dnd-3.5e warlock familiars or ask your own question.

8
Getting a new familiar with Improved Familiar
3
What's a “safer” alternative to a Bag of Holding/Secret Chest?