What is the maximum possible chance to critically hit?

What is the highest possible chance to critically hit? This can include content from any official source as well as Unearthed Arcana.

Note I'm looking for the highest chance for the die roll to result in a crit, NOT factoring in effects that specifically guarantee a crit (e.g. any hit on a paralyzed or unconscious enemy, or features like the rogue's Assassinate feature).

I'm looking for both the methods used and the overall %chance to hit. For reference, the character does not have to be viable in a game; this is pure theory-crafting.

From Champion Fighter, you succeed at scoring a critical hit on 3 out of 20 dice rolls (17 chances to not fail).

In total, we roll a d20 seven times. If any of those rolls would be an 18 or higher, we crit. Alternatively as long as all of them aren't 17 or lower, we crit:

This result is very similar to Dale M.'s answer, however it outlines a small improvement: Halfling Luck is conditional on a 1/20 chance of rolling a one per reroll. However often that chance of rerolling is checked, Elven Accuracy grants an additional reroll unconditionally so it is the better feature.

Now, to consider the reliability of this build, we'll look at features that are not expended:

How does this compare to a Halfling with Halfling Luck?

For reference, these are the chances depending on how many rerolls you have available for use on the attack:

As you can see, with each additional reroll, you start to see diminishing returns. At the end of the day, you CAN spend a casting of Wish on your next turn to reroll the past event to get an 8th reroll, but you'd have only increased your chance of scoring a critical hit by about \$+5\%\$. That casting of Wish could just as easily have been used to cast Sunburst for \$12\text{d}6\$ damage or an 8th Level Scorching Ray for up to \$16\text{d}6\$ (with more chances to crit because Elven Accuracy applies).

For this, we're going to assume that you have a source of advantage for the entire turn, which is fairly expected in high level play. Either some Faerie Fire has hit the mark or a target has been knocked prone, Flanking rules are in effect, or you just used a Scroll of Foresight. Doesn't matter where it comes from.

This means that every attack made makes three rolls minimum.

We're also going to assume that the character will be using their bonus action to Two-Weapon Fight for an extra attack per Action.

Further, we're going to assume the character is under the effects of Haste, also a fairly expected boon in high-level play.

In total, the character is making eight (8) attacks and each of them is being rolled at least three (3) times.

Action Surge is a resource that gets consumed, so in reality, only 5 of those attacks can be expected sustainably.

And lets say that you are only granted advantage on that first attack, meaning only \$3 + 4\$ rolls made per turn.

Hey now, isn't that something? That number looks pretty familiar.

A Champion Fighter 16/Diviner Wizard 2 with the Lucky feat and a Luck Blade.

First, your Familiar will Help to give advantage, then use your action to make your attack. A combination of Superior Critical, Halfling Luck, Lucky and your Luck Blade give you about a 49% chance of a critical (or precisely \${1,573,143\over 3,200,000}\$) as follows: 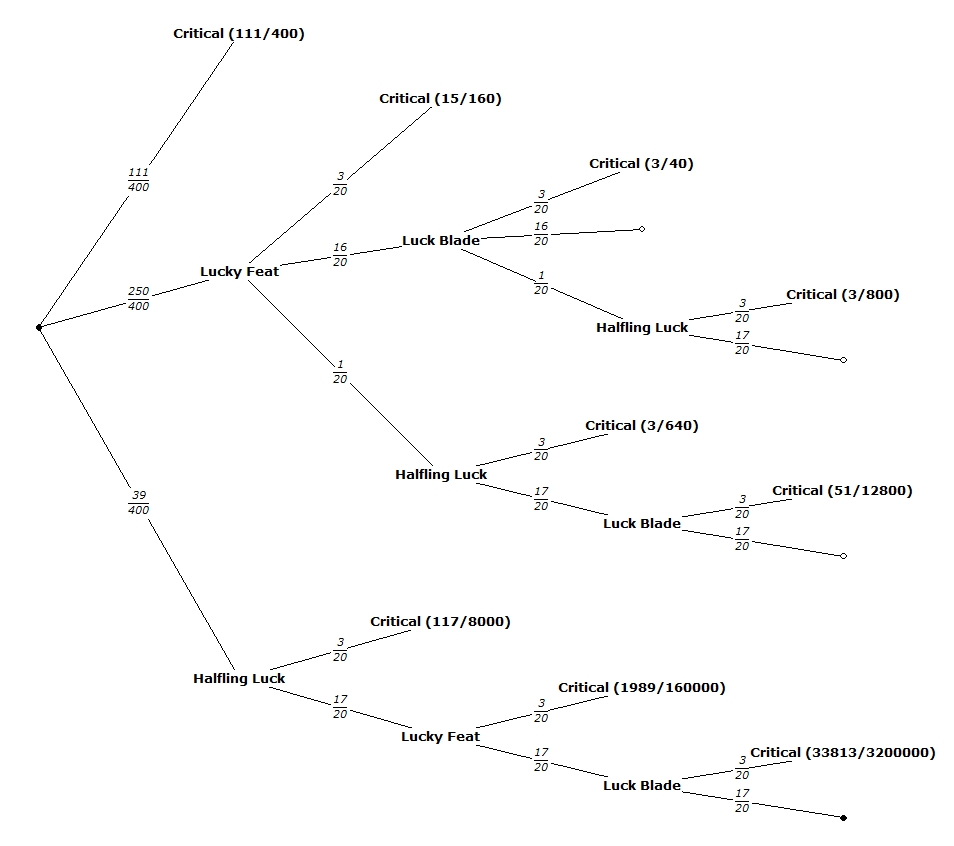 This assumes you are looking for the best chance on a single attack. Given that a 20th level fighter gets 4 attacks per round and can action surge and two-weapon fight (with 2 Luck Blades) to get a total of 9, they will have a better chance of getting a critical hit from one of those without mucking around with True Strike and Wish; particularly if they can get advantage some other way - probably over 90% although things get complicated because the Lucky Feat will run out.

Not the answer you're looking for? Browse other questions tagged dnd-5e optimization critical-hit .

18
Is the Alert Feat better than an Ability Score Improvement for a Rogue?
22
Is there a way to make the Elven Accuracy feat work with the second benefit of Great Weapon Master?
18
Can you use Lucky (feat) followed by Portent to replace a roll that's already been made?
19
If I score a critical hit on an 18 or higher, what are my chances of getting a critical hit if I roll 3d20?
10
If the Simulacrum spell is cast on a Divination Wizard that currently has Portent rolls stored, does the Simulacrum also have those Portent rolls?
5
What is the max damage I can do with a 20th-level greatsword-wielding melee Hexblade Warlock?
16
Which is better? Improved critical or extra damage die?
0
Between the half-orc's Savage Attacks trait and the Elven Accuracy racial feat, which is better?
6
For a Portent feat based on the Lucky feat, how many Portent dice would be balanced against the 3 points (dice) from the Lucky feat?
11
Rogue Feats & Damage: Elven Accuracy vs Mobile