How do we determine circular AoE areas on grid? [closed]

I don't know how to explain it, but I have a question about spells areas, imagine a spell has a 10´radius circle area, which one work better? 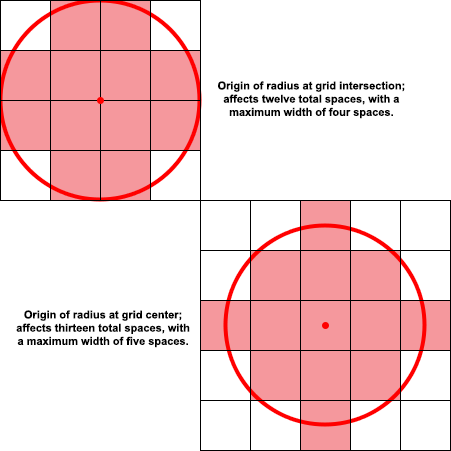 I'm confused because the lower option its not 10´foot radius its, 12,5´foot radius, taking an extra square of area.

Your first option is correct.

The origin of an AoE must be the intersection of squares, and squares that are more than half covered are affected.

Not the answer you're looking for? Browse other questions tagged dnd-5e area-of-effect battle-map or ask your own question.

13
20 foot square versus a 20 foot circle on a battle mat
4
How to measure on a grid the area of a sphere area spell or effect centered on a creature?
2
How many squares on a 5-foot grid does a 5-foot radius spell affect?

19
What is a radius on a square grid?
21
How does the area of effect of a fireball cast in a corridor or small room work?
2
How many squares on a 5-foot grid does a 5-foot radius spell affect?
5
How does battle map combat work in darkness and heavily obscured areas?
4
How to measure on a grid the area of a sphere area spell or effect centered on a creature?
4
How does the Globe of Invulnerability spell work?
3
On a grid, what is the area of effect of Spirit Guardians?
8
When using the Wall of Fire spell, what shape is a ringed wall on a grid?
2
How do I handle targeting and areas of effect in 3-D?