How do I handle targeting and areas of effect in 3-D?

I'm totally OK with regular grid and counting squares for purposes of movement, spell and weapon targeting, and determining areas of effect. Area shapes neatly match with measurements made square-by-square, so I may construct any irregular shape if needed, including things like spreads.

What I can't find rules for is how to count above things in three dimensions (including 'double-diagonals').

If I understand correctly, at least first diagonal should be 'free' on both axes for far edges of areas to be consistent (for effects and weapons to affect things on those edges), but is there some rule for how to count squares after the first, and if there isn't one, how you suggest to handle this?

As a note, for now I handle this mostly by looking, what radius circle would a sphere share with a plane, situated on a given height, and then use this radius as a 'new' area of effect for those on this height. But it doesn't seem to always produce right results. In my example above, this method would result in second and third layers to be identical, which is probably incorrect.

Also, I play mostly by post, so time is not an issue.

To establish what the rules say—which isn’t much for the 3D case—here’s what we’ve got:

When determining whether a given creature is within the area of a spell, count out the distance from the point of origin in squares just as you do when moving a character or when determining the range for a ranged attack. The only difference is that instead of counting from the center of one square to the center of the next, you count from intersection to intersection.

This establishes that simply measuring things, with string or rulers or anything else, is not the official rule—though it is honestly the most sensible one. However, should you handle things that way, note that large areas—as in, even in the 2D case—will have deviations from where a character can reach, because of the approximations used in the official method. For what it’s worth, you will only start to see such deviations once you start dealing with radii of 50 feet or more, though.

When measuring distance, the first diagonal counts as 1 square, the second counts as 2 squares, the third counts as 1, the fourth as 2, and so on.

This establishes the “5-ft., 10-ft.” rule that we’re familiar with. This is in the combat section on movement, which doesn’t really touch on 3D movement—that has its own section elsewhere.

[nothing about diagonals at all]

The rules we have for 3D movement do not mention anything about diagonals. There just isn’t any rule about them here.

Without an explicit “this is what you should do for this case” rule, we have to come up with something. There are a few options here:

We could imagine that the rules just “fall back on” the existing rule for diagonals, for all it talks about “squares.” After all, it is true that the rules very, very often use “square” (or “circle” or “rectangle” or other 2D shape) when they should use “cube” (or “sphere” or “rectangular prism” or other 3D shape). But this isn’t done consistently, nor do I particularly get the impression that it was done in a kind of jargony “this is what the words mean in our context” kind of way. Rather it seems, often, to have been done more in a “we were only thinking about the 2D case and never considered the 3D case at all.” That is, very often, when we read “square” and understand “cube,” what we are doing is extrapolating from the rules. Usually, this is very straightforward—mentally replace “square” with “cube” and you’re done.

So we can’t really “just fall back on” the “default” rule about diagonals, treating “square” as “cube.” Or, we can, but that isn’t “just” what we’re doing. Really, what we are doing, is extrapolating. That is, we cannot really say there is a rule for this at all—we’re making up a rule, in the hopes that it is consistent and useful.

But are 3D “double diagonals” well served by this rule? Is our extrapolation consistent and useful? Is this what we are “officially” what we are supposed to do? It is not—at all—clear to me that any of these are true. After all, it lets you move vertically for free, if you were already moving on a diagonal. It makes moving on a “double diagonal” better than moving on a straight line, which seems very wrong. Intuitively, to me, this rule seems very strongly like a case wherein the devs simply forgot about 3D movement entirely—which is not terribly surprising.

So what would we use here, to be consistent with this rule but to account for “double diagonals”?

Combining single and double diagonals then becomes possible by leveraging those fractions—7.5-ft. + 8.75-ft. is 16.25 feet, so the second step when moving single-diagonal then double-diagonal is going to cost 10-ft, but the 1.25 feet “extra” is less than the 2.5 feet “extra” from two double-diagonal moves. By tracking that extra you can keep track of how far a character has actually moved.

Which to use? Simple substitution far superior 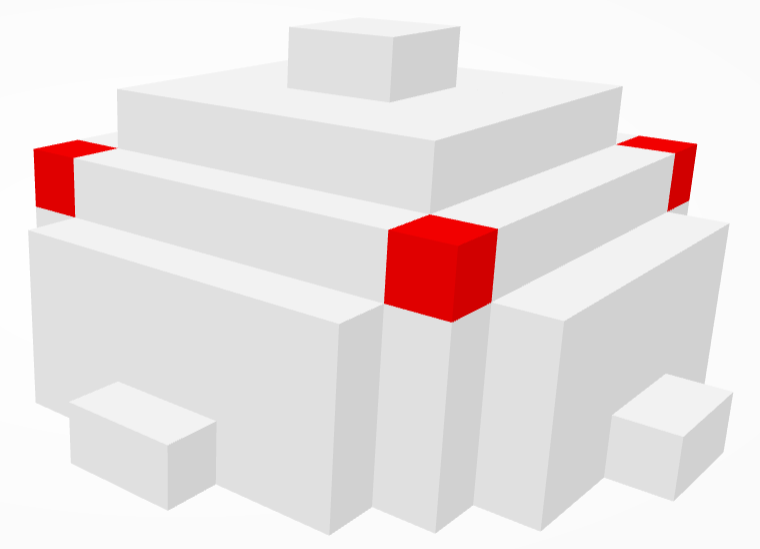 And the other nice thing about this is that any two points that are within a given 2D distance of one another, and also are no more vertically separated than they are horizontally, can be sure to be within the 3D model as well. So you can just flatly ignore 3D effects for any two points that are closer vertically than they are horizontally. You can also just mentally flip the horizontal and vertical axes, so anything more vertically distant than horizontally can be considered solely on the vertical axis (though you’ll probably have to work harder at that because of the presumed lack of grid). That is a huge advantage.

Ultimately, I still don’t know if the “5-ft., 10-ft.” rule was supposed to cover 3D and “double diagonals” too, or if they just never thought about 3D and it’s just what we’re left with, but it’s pretty clear that you should use that rule. I just desperately wish the rules had explained all of this—or even just asserted it—because until I did the work myself, I didn’t believe it would work out well at all. Hopefully this answer will convince you and save you that effort, as well.

Use the “5-ft., 10-ft.” rule; it’s vastly simpler in practice, and the discrepancies are extremely minor.

Unfortunately, even with this simpler approximation, 3D movement and distances are very difficult to work with. I don’t recommend them—if you actually bother with this mess, I salute you, because I honestly think it’s insane. But unfortunately, unclear rules and complicated calculations—even if not as complicated as they could be—are the reality of 3D movement in D&D 3.5e. I strongly recommend a gentleman’s agreement to just keep things grounded, or houserule in some form of abstract flight—here’s mine.

My group usually just grabs a tape measure or two, or even some string that we measure out against the game grid. If you are curious if a spell will reach, just use the tape measure and check. Two tape measures are really needed, one for the altitude above a square the flying creature occupies and one to check distance. If it is an AOE (Area of Effect) spell, then you just make a series of measurements. And remember, it's a game, not science, so it doesn't have to be perfect.

Measuring Distance Diagonals: When measuring distance, the first diagonal counts as 1 square, the second counts as 2 squares, the third counts as 1, the fourth as 2, and so on. (If it helps, you can think of a diagonal as a distance of 1.5 squares.)

While most of the text on movement has a distinct 2d bias and assumption in the parts that describe movement, this particular text lacks that bias and applies universally to all types of movement, even flying and other forms of 3D movement.

See also Rules Compendium pages 91-92, for more details of flying movement (specifically the part about diagonal movement speed limits on flying at up or down angles, which assumes standard Prime gravity.)

As is often the case with D&D, this approximation of reality is not that accurate, but it is the official rules on diagonals.

Not the answer you're looking for? Browse other questions tagged dnd-3.5e movement targeting area-of-effect 3d-space .

22
Grasp of Hadar: can using it while flying cause falling damage?
0
Is circular movement treated as moving diagonally or difficult terrain?
2
Do the incorporeal swordsmen created by the Legion of Sentinels spell appear in midair?

22
How does the Fireball spell's area of effect work when cast in a corridor or small room?
2
How many squares on a 5-foot grid does a 5-foot radius spell affect?
11
What area does the Hallow spell actually cover?
7
Can a cylinder-shaped spell be cast on air?
10
Large creatures movement penalties based on space available where movement ends
11
How large is a Globe of Invulnerability cast by a Large creature?
6
On a grid, what is the area of effect of the Spirit Guardians spell?
2
How exactly do cylinder spells and effects "ignore obstructions" in their areas? Or what kinds of obstructions they can realistically ignore?
7
On a self-targeted spell like Spirit Guardians, can the caster change the intersection corner on a grid?
2
Do the incorporeal swordsmen created by the Legion of Sentinels spell appear in midair?