Roll and Keep in Anydice

I want to check out the probabilities of the Roll and Keep system (as known from L5R 1-4th Edition) in Anydice. We luckily have boundaries:

For a roll of 10k3, this would be this code, but it fails to compute:

How best to model this in a way that allows testing 1k1 to 10k5?

When working with many kinds of modeling there is a tradeoff between accuracy and speed. Anydice cuts us off on our speed, so we need to lose some accuracy. Anydice already truncates to exploding twice anyway and seeing as exploding twice on a d10 will only happen in 1 in a hundred throws the error should be fairly small.

For simplicity — rather than implementing a custom explode function — we can simply create the truncated exploded dice like this:1

Which I'd call close enough: 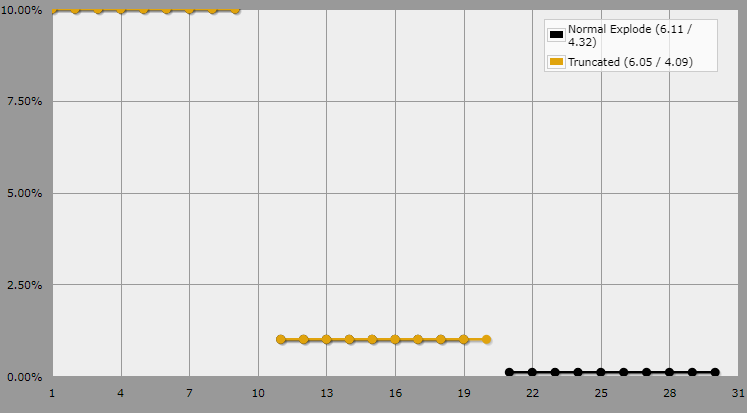 Anydice will then model up to 8k3, at least fairly close. It will slant slightly lower, and obviously loses out on the extreme highs (which are pretty much 0 anyway).

You can consider the effect for this for pools were anydice is willing to calculate with explodes, say for 5k3: 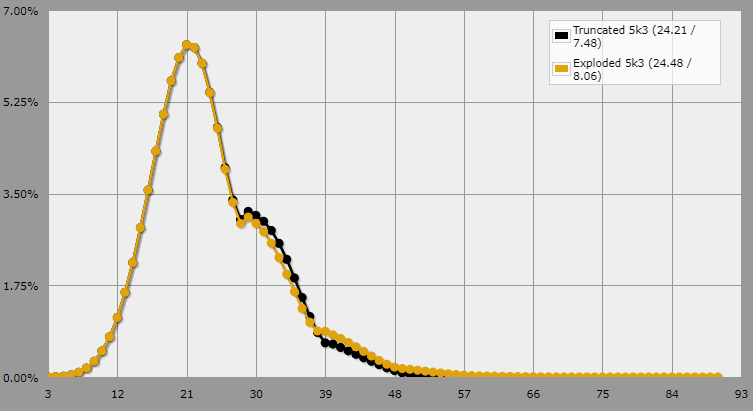 Carcer points out you can do the same thing by changeing anydice's explode depth:

but I'll stick to the custom die method partly to show it off and because it appears to be slightly faster, but onfortunatly not enough to be give an actual benefit to us here.

It looks like AnyDice just can't handle calculating "10k3" even with rerolls limited to just one. So I took my old dice probability calculator written in Python and added a few more features to it.

With the code from this GitHub gist saved as dice_roll.py in the current directory, you can load it into the Python REPL with python -i dice_roll.py and then e.g. calculate and print the distribution of 10k3 (with up to two rerolls by default) in CSV format like this:

Or just Try It Online!

The results, for various numbers of allowed rerolls per die, look like this:

Looking at the graph, one can see that the first two rerolls make a noticeable difference, but the effect of the later ones is pretty negligible. Which makes sense: for each die, the probability of getting at least n rerolls is 1/10n, so the expected number of dice out of 10 that get 3 or more rerolls is 10/103 = 1/100. And since this expected number of third rerolls is much less than one, it's also approximately equal to the probability of getting even a single third reroll. And the expect number of fourth rerolls, of course, is only 1/1000, and so on.

The Python implementation I wrote handles this problem better than AnyDice for two reasons. The first is simply that it doesn't have the 5 second runtime limit of AnyDice, so (at least when running it locally on your own computer) you can let it run as long as it needs to.

The second reason is that my code is actually a bit smarter than AnyDice, and avoids generating all the possible combinations of the lowest 10 − 3 = 7 dice rolls just to throw them away. This means that, despite Python being a much slower language in general than C++ (which I believe AnyDice is written in), my program actually manages to calculate e.g. 10k3 with max 2 rerolls in only about 0.1 seconds on TIO, significantly faster than AnyDice (which times out).

The code in the gist is actually quite a flexible mini-framework, and can do pretty much anything AnyDice can do (albeit some things more easily than others) and a few things that AnyDice cannot. Some examples:

The code itself provides basic documentation on how to use the various functions it provides. FWIW, all named arguments in the examples above are optional (with fairly reasonable defaults) and can be either named or given as simple positional arguments, so e.g. sum_roll(d6) and sum_roll(d6, 1, 1) are both equivalent to sum_roll(d6, count=1, select=1).

FWIW, this is getting kind of close to something resembling a reimplementation of AnyDice in Python. I really should consider turning it into a proper Python module with decent documentation.

Not the answer you're looking for? Browse other questions tagged statistics anydice l5r .

13
How can I model Burning Wheel probabilities in AnyDice?
7
How do I find the highest number rolled in a pool if dice, and the number of times it is rolled using AnyDice?
3
AnyDice functions and subsequent dice rolls
2
Homebrew system need help with probability in any dice
11
Syntax for a unique dice system on Anydice?
1
How can I model the probabilities for highest and lowest of opposing dice pools?
6
Can I keep results with Strife while I'm Compromised if my teammates grant me assistance and take Strife for me?
8
How to calculate the probabilities for eliminative dice pools (dice cancelling mechanic) in Neon City Overdrive?
4
Modeling a system where you roll Xd20 and take highest, plus the second highest if the first one is a critical, etc
8
Have highest die be rerolled if a 1 is rolled in AnyDice