What game uses yellow 20-sided dice with letters and arrows?

Full disclosure: These are from my own online store (see my profile.) I've sold a small number of them over the years to dice collectors, but I don't know why anyone would want them or what they are used for.

Years ago, I picked up some of these weird yellow dice from Crystal Caste in one of their bulk dice packs.

Symbols on the faces appear to be: 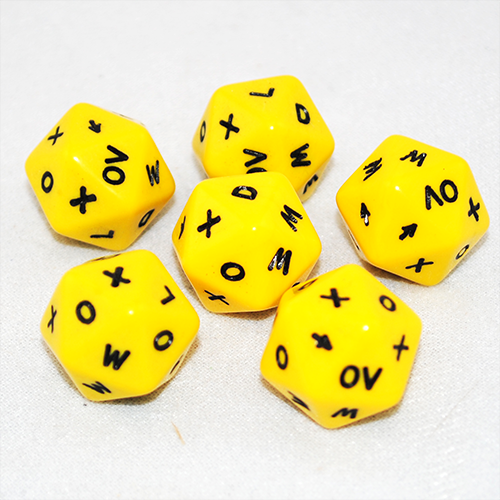 (I recently answered this question on BGG Facebook page, here it is reprinted)

It is for a Tennis game by Richard Archer, patented as US20020171199 in 2001, now abandoned. The twenty-sided die would be used in the advanced game and also acted as the tennis ball. Here is a quote from the patent:

(a) X (cross court)—receiver becomes thrower and must return dice cross court into the backcourt for the rally to continue. If it isn't cross court and in the back court (area behind the service court back line) thrower loses the point. If it is in cross court back court, read dice and continue the rally.

(b) ↓(down the line)—receiver must return dice down the side line and into back court for the rally to continue. If dice goes short, in front of service line, or cross court, thrower loses the point.

(c) OV (this has two meanings)—If it comes up on the serve it means the same as a let, serve it over. If it comes up on a rally, it means you must throw an overhead. From above the court, throw overhead overhand over the net and into the court. Remember if the overhead bounces completely out of the box you lose the point. Figure out how to throw it so this doesn't happen.

(d) L (lob)—must throw a lob (high arcing shot) over the net and into the backcourt for rally to continue. You lose the point on any lob that falls short, in front of the service court back line.

(e) D (drop shot)—must throw dice over the net and into service portion of court for rally to contine. A very short shot.

EDIT: The correct answer was given by Hawklord.

Similarly to Sciborg's comment, I also looked all over the internet and found no clue. Honestly they look like promo dice from some custom-dice site, showing that even the small sides of a d20 can contain two letters, but also symbols.

(I would have preferred to post this answer as a comment, but my rep is too low. Please feel free to move it to the comment section, if this makes sense and is possible.)

Not the answer you're looking for? Browse other questions tagged dice product-identification .