What is the name of the three small islands west of The Cloakwood (and Baldur's Gate)? 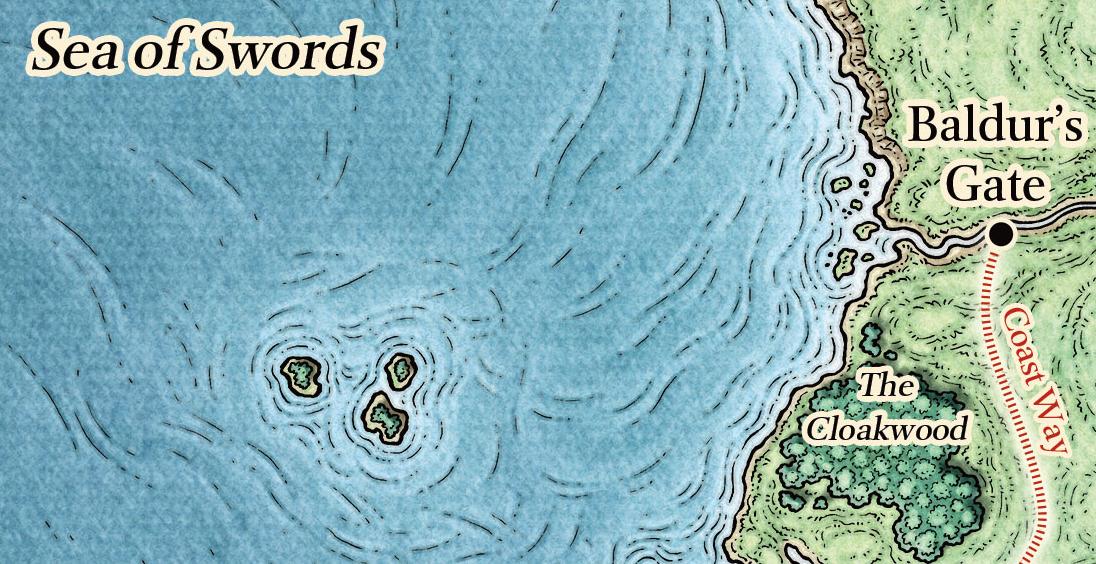 These islands just west of the Cloakwood and Baldur's Gate appear in every map I can find depicting the Sea of Swords, but are never tagged.

Before you google, the islands just southwest of The Cloakwood (and directly west of Candlekeep) are the ones known as The Cimarine Isles. The islands in the photo appear to be completely separate.

What are they named?

In the Dragon #362 article Grand History of the Realms: The Moonshaes, published 2008, there is a reference to an event in 1052 DR when Baldur's Gate defended some islands called "Jannath's Tears" from the fleet of Bayle Carrathal, a king from the Moonshaes. Dragon magazine was published online at that time - the original content is no longer hosted on Wizard's site, but can be seen here on the Wayback machine:

High King Bayle Carrathal of the Moonshaes seeks to annex the islands of Jannath's Tears into his kingdom. Baldur's Gate comes to the defense of the Tears, sinking Carrathal's small fleet.

This does not explicitly identify the islands in question, but the trio of islands are the only significant landmasses between Baldur's Gate and the Moonshaes proper, and it makes sense that Baldur's Gate would be trying to prevent kingdoms of the Moonshaes from controlling them and threatening their lucrative commercial shipping routes.

So far as I can tell, the islands may have been originally named in the Candlekeep Compendium fanzine - specifically, in the Volume IX (October 2007) article Perilous Portals: The Sea Gates, in which the author Mark Taylor posits the existence of a portal that can be found in the area of ocean between the three islands, and specifically describing that:

Jannath’s Tears are three small islands, located some 160 miles due west of Candlekeep. This name dates back to their discovery by the Netherese, and is normally only used by sailors from Calimshan and parts south. Most of the legitimate captains of the Swordcoast today refer to these islands as the “little Shaes”.

Which allows us to more conclusively identify the three islands mentioned as the ones described here, since they're the only islands on the map that can be described as "160 miles due west of Candlekeep". The name is presumably in reference to the goddess Chauntea, who was once known as "Jannath the Earth Mother", and is still worshipped in that aspect in the Moonshaes.

Interestingly, but seeming coincidentally, as of 1357 DR, one of the Dukes of Baldur's Gate is the powerful magic-user Liia Jannath, suggesting there is likely a Jannath family in the region who were at least influential enough to get a seat on the Council of Four there. She is mentioned in the 1e Forgotten Realms Campaign Setting box set, well before the Candlekeep Compendium was ever published, so may have been another inspiration for naming the islands. Potentially, the Duke/family and the islands could be connected somehow.

This fanzine is, of course, not an official production, but as it so happens Brian R. James was a frequent contributor to the Candlekeep Compendium, and the Grand History of the Realms 3.5e sourcebook and the aforementioned Dragon article were written by... Brian R. James. The Volume IX introduction even notes:

This volume is dedicated to Brian R. James; our very own Candlekeep loremaster who made it to be a Forgotten Realms designer with The Grand History of the Realms

So it seems likely that he may have snuck in the reference to Jannath's Tears as a nod to his friends at the Candlekeep Compendium.

I've found 2 references that refer to those three islands as Jannath's Tears; neither are official content, and I can't source where they got the names from:

But, not proof positive, the author of the second link could have simply read the first.

Not the answer you're looking for? Browse other questions tagged dungeons-and-dragons lore forgotten-realms maps .

3
What and where was the Cloak Tower?
5
What is the proper elven name for Wood and Wild Elves?
7
What official material describes Baldur's Gate in 5e canon?
6
What is the name of the mountains/hills northwest of Secomber?
8
Where is Laerakond ("Returned Abeir") after the Second Sundering?
14
When does the spin-off board game "Betrayal at Baldur's Gate" take place in the Forgotten Realms setting?
9
Are the female elves in this AL adventure actually Dusk Elves?
10
What years, in DR, were the three dead (Bane, Bhaal and Myrkul) mortal?
17
What high-end fantasy fabrics and textiles exist in the Forgotten Realms?
7
Where was Baldur's Gate (the fictional city) first described?