How can I show the effects of illusions in Roll20?

My players are approaching a battle with Fraz-Urb'luu, who will have prepared the battlefield in some manner using an effect like Mirage Arcane and several other illusions and deceptions.

Given that I anticipate some characters having the benefit of True Seeing and others will not, is there a way for me to somehow present both the illusory and real battlefield? Ideally the method is practical to implement, but if I need to learn some technical skills to make this happen, that's fine as well.

I typically will create my own maps using a combination of the blank background and whatever tokens I can find for free online. For example, my most recent map had the players fighting on Avernus, so I started with a red background, overlaid tokens on the Map layer to create mountains, sketched in linework and hatching for Styx and the portion of the Basalt Citadel that they could interact with.

The overall map was something like 60x75 squares. As we're playing the game at very high levels, I'm intent on making large scale maps to allow players that have abilities that improve their mobility to enjoy that.

If you're a Roll20 contributor, you can enable Advanced LoS, where each player only sees what his tokens control. You can have 2 maps, one riddled with illusions and one without, and divide players accordingly.

If Alice has true sight, put her in the real map. Bob, without true sight, is placed on the illusory map. Then, copy Bob's token (but Bob won't have permissions over it) and put it next to Alice, so that she sees where Bob is (you have to manually move this token during Bob's turn, a single drag and drop). Do the same with a copy of Alice next to Bob.

This is the DM PoV: 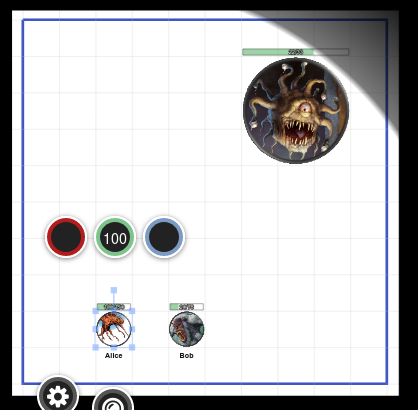 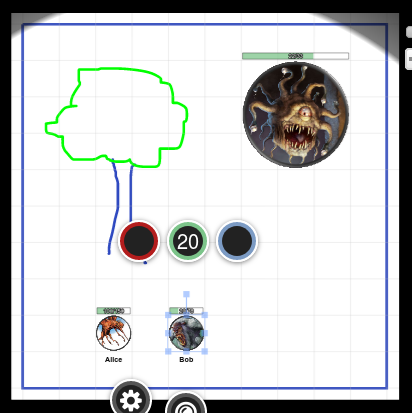 If you have different illusions for each player, many illusions, many creatures, or many players, this takes more work to move each copy. If HP (and whatever other information is shown to players) is properly linked, movement is the only thing you need to do by hand. However, poor scalability is the big problem of this solution.

To set this up, the page must have Line of Sight enforcement

And you just enable or disable Vision on player's tokens (on the left, Bob's blind token on the real map, on the right Bob's real token on the illusory map)

If you can't fit both maps in the same Roll20 page, create two pages, and have each one in a tab on your browser. Drag each players from the avatars (usually on the bottom left corner) to the adequate page, and when done, drag them all back onto the Players ribbon.

I have two ideas that I know Roll20 can handle:

If the grid is labeled in a manner similar to a chessboard you can easily point out areas, precise to the square, where players observe something different from what the map itself shows.

If there is an illusory swamp, you can put that on the map layer for everyone to see. Then, if a player with Truesight moves into a range that lets them perceive the illusion, you can directly whisper that information to them

/w TrudyTheTrueSeer As you move forward, your Truesight reveals that the swampy terrain in squares (36, 47) through (38, 49) is an illusion.

The labeled rows and columns fits the square-tile map design well, and makes it very quick and easy for you and your players to refer to the same specific areas at need. This also makes it easy for the players to sketch their own map or make notes to keep track of the information, since it is awkward to show multiple players different maps when they're in the same place.

A common map with individual legends

This is basically a battlemat approach ported directly into Roll20.

The basic idea is that you in distinguish map elements in some way that can only be decoded by using a legend, and then give each player a legend which reflects their perception. This will work better with less detailed map elements (like colored boxes, lines, or simple drawings) than with tokens, but could be applied to some tokens as well.

If we have an area which is normal terrain but has been subjected to Mirage Arcane to look like dense, thorny vines, the area might be represented simply by a green rectangle indicating the area's dimensions, or a copy-and-paste mass of a simple drawing of a thorny vine (or anything else, as long as it's distinct from other elements on the map). This is the common map that all players see.

But the map legends that explain the map are distributed to each player individually. The players with True Seeing will find the entry for the green lines (or that drawing in that color) to be illusory terrain, while the rest will find the entry describes the ostensible dense, thorny vines as they appear to mundane vision.

This approach takes a fair amount of planning because you have to be sure that the symbols and colors are distinctive enough to differentiate from others at a glance without being obviously notable. As an example, if there are real vines as well as illusory vines on the map, it conveys meta information to players if the real ones are green and the illusory ones purple-- it's clear that they're different in some way, unless each color is similarly plausible.

This approach can also give away information about the entire map at once. If a player identifies purple vines as illusions, then all purple vines on the map will are probably illusions. You can mitigate this with more colors randomly assigned (the green, red, and blue vines are real, but the purple, black, and yellow vines are illusions), but it will still probably alert players to the fact that there are varieties of terrain feature which matter.

In any case, this approach eases the burden on narration for you a bit. You can always describe things as what they look like, and players can refer to their own private knowledge to interpret them correctly.

All creatures see illusions. Whisper to players who realize they are illusions

Even with Truesight, you still see all illusions.

A creature with truesight can (...) automatically detect visual illusions and succeed on saving throws against them

So just draw your map, set up all illusions of Arcane Mirage for everyone to interact with:

Also prepare all other Major Illusions, and anything else you require, and then whisper Alice, who has Truesight

/w Alice Your PC realizes that the tree is not real! It is just an illusion, although it is so well done you can still interact with the tree, and could touch it, for example.

If you have invisible creatures, use placeholder tokens for everyone to see. Underneath each creature, place a random bush or something. Players without truesight will just see natural terrain. To others, you whisper

/w Alice You also see a bunch of invisible Stalkers. See those 5 bushes over there? They are there to mark the location of the Stalkers.

This is simple, and doesn't require much work on your part (you can even pre-write the whispers and just copy paste as needed). There isn't much chance for meta-gaming, as the players of PCs without all the information also do not have all the information. It is also available with Roll20's free version. However, this can break immersion, and some groups are against this.

Not the answer you're looking for? Browse other questions tagged dnd-5e tools illusion battle-map roll20 or ask your own question.

16
In Roll20, how to program a macro that mimics the built-in attack function?
13
How to effectively (pre)build encounters for a 'Sandbox' Setting
11
How can I use Roll20 to reroll some dice until I get no duplicates?
3
How do I fix this Roll20 macro for starting gold after first level?
9
How can I have a Token with a Macro on Click in Roll20?
8
How can I make a Roll20 macro that shows different text depending on the result of a die roll?
35
How do I help players frustrated by darkness in Roll20's dynamic lighting?
2
How can I issue multiple commands from a single query choice in Roll20?
14
How can I let players create and move their own tokens in Roll20?