Does the Mage Hand cantrip pass through solid surfaces?

Last session, my Arcane Trickster was faced with some murky water and we needed to know how deep the bottom was. I decided to use mage hand to try to locate the bottom of the water without putting my own hand in there, but then we were stuck with the question: would my mage hand just float straight through the bottom?

Another way of wording this question would be "does mage hand go through walls"?

A spectral, floating hand appears at a point you choose within range.

But exactly what the hand is is not described any further. Does spectral mean "float through walls" like an incorporeal ghost, or is it spectral only in the sense that it's not a creature or an object? Either way, if the caster sent the hand through a wall or the floor, would it go through or just bump up against the wall?

We know for sure that the mage hand is physical, since it can interact with objects and for that it has to "collide" with them.

It doesn't state anywhere that it can become ethereal (much like ghosts), so we can only assume that it isn't possible for it to phase through solid surfaces.

The hand is not incorporeal. "Spectral" refers to its appearance.

TL;DR: No, a Mage Hand does not move through creatures or objects.

One of the key principles of 5e rules is that there are no hidden rules.

As per @illustro's answer both the Specter and Ghost have a special movement mode:

Incorporeal Movement. The specter can move through other creatures and objects as if they were difficult terrain. It takes 5 (1d10) force damage if it ends its turn inside an object.

Incorporeal Movement. The ghost can move through other creatures and objects as if they were difficult terrain. It takes 5 (1d10) force damage if it ends its turn inside an object.

The Mage Hand spell, however, has no such exemption:

A spectral, floating hand appears at a point you choose within range. The hand lasts for the duration or until you dismiss it as an action. The hand vanishes if it is ever more than 30 feet away from you or if you cast this spell again.

You can use your action to control the hand. You can use the hand to manipulate an object, open an unlocked door or container, stow or retrieve an item from an open container, or pour the contents out of a vial. You can move the hand up to 30 feet each time you use it.

In the absence of exemption, the more general rules apply, and the general movement rules do not allow one to move through other creatures and objects.

Ergo, a Mage Hand cannot move through other creatures and objects.

As for the use of spectral, it follows that as Educorreia mentioned it only concerns the appearance of the hand.

Specifically, I would expect the Mage Hand to be see through, as per the illustration from fandom.com: 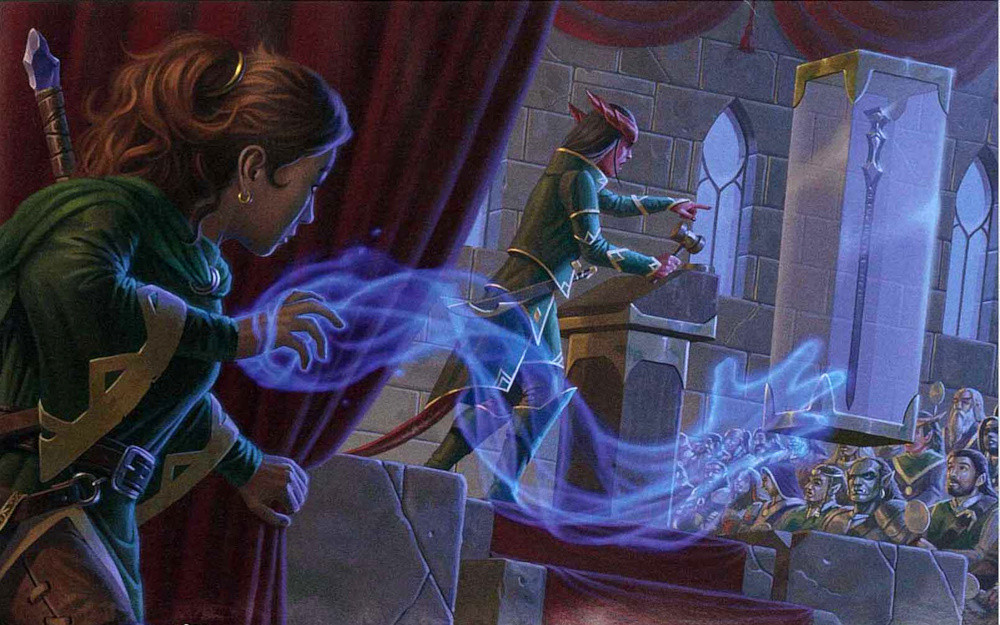 The Mage Hand can pass through solid objects

The word spectral isn't defined as a game term, and thus takes on it's regular idiomatic English meaning. That meaning is defined as:

1: of, relating to, or suggesting a specter : GHOSTLY

We felt a spectral presence in the old ballroom.

No ghost stood beside me, nor anything of spectral aspect; merely a motherly, dumpy little woman, in a large shawl, a wrapping-gown, and a clean, trim nightcap. — Charlotte Brontë

coming from or seeming to be the spirit of a dead person:

of or relating to a specter; ghostly; phantom.

resembling or suggesting a specter.

All of these definitions specify that spectral is a synonym for ghostly, or being of a ghost. In 5e, we have two creatures which are strongly related to the word spectral, the Spectre and the Ghost.

Both of these creatures have the Incorporeal Movement feature:

Incorporeal Movement. The specter can move through other creatures and objects as if they were difficult terrain. It takes 5 (1d10) force damage if it ends its turn inside an object.

Incorporeal Movement. The ghost can move through other creatures and objects as if they were difficult terrain. It takes 5 (1d10) force damage if it ends its turn inside an object.

As a result, the specification of the hand as spectral, does have a mechanical implication, namely that it has the ability to be incorporeal. As a point to this, both of these Incorporeal Movement abilities use the word can not must, implying choice in whether or not they pass through the creature or object, or interact with it.

13
Do you need to be able to see the Mage Hand to use it?
7
Am I aware of the location of my Mage Hand, which I can't see, if it is obstructed as I move it?
6
Does Mage Hand require line of sight to summon?
3
Can an Arcane Trickster's Mage Hand be used in closed containers?

13
Do you need to be able to see the Mage Hand to use it?
21
Does an Arcane Trickster's Invisible Mage Hand Conceal Objects It Carries?
19
Does sovereign glue work underwater?
16
Can the Mage Hand cantrip feel?
6
Can a spiritual weapon be moved through walls?
21
Does Mage Hand give away the caster's position?
6
Does Mage Hand require line of sight to summon?
7
Am I aware of the location of my Mage Hand, which I can't see, if it is obstructed as I move it?