Do Large (and larger) creatures drop equipment suitable for their size?

I noticed there isn't an indication of size on the equipment of Large (and larger) creatures. I'd assume they would drop weapons and armor corresponding with their own size, but the illustrations of some creatures depict them one-handing two-handed weapons, such as the Stone Giant wielding a greatclub: 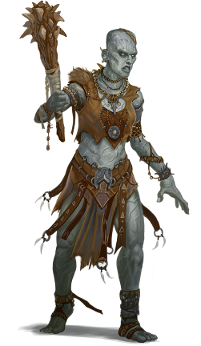 Is there a hard-and-fast rule on the size of equipment dropped by Large or larger creatures?

equipment creature-size pathfinder-2e
Share
Improve this question
edited May 11 '20 at 22:10

Monster and NPC creation does not follow the rules for Player Character creation found in the CRB. Instead they use the guidelines found in the Gamemastery Guide.

Creatures aren’t built the same way PCs are. The rules for building them are more flexible, and their statistics are based on benchmark final numbers rather than combining each individual modifier together. This is called top-down design, in which you consider the design process as a whole and select the details that reflect your intended result, rather than building statistics from the bottom up and hoping the finished creature matches your vision.

-- From the Gamesmastery Guide, on building creatures

Monster design, including loot, is top down. That is to say, you start with the end goal in mind, of which narrative sense is usually a part, and choose numbers and loot that fit what you, or the designer wants to accomplish.

Consulting the gamemaster's guide on monster creation, under items size is not considered specifically. Instead, the focus of that section is entirely on player wealth. If for thematic reasons the monster wields a weapon that is unusable for the players, it's potential impact on player wealth should still be considered - for them, it may as well be objet d'art. In fact this might be a creative and thematic way of providing your characters with money!

However, the section on monster damage does consider monsters wielding manufactured weapons in the sidebar, but again primarily from a top down perspective; what are the your/the designers goals, for this monster, and this encounter?

In general, the monster's overall damage is balanced for the encounter, rather than the specific weapon. If the monster is themed as wielding a tiny dagger, then it has abilities that compensate for the dagger's low damage.

The final paragraph of the sidebar may be particularly relevant for some GMs considering this question, and wanting to give a Giant Instinct Barbarian a cool weapon;

On the flip side, you might want to use a one-off creature as a source of a particularly high-level piece of treasure, such as a magic weapon. In these cases, you might want to make the attack bonus higher for the potency rune or the damage higher for a potent striking rune so the PCs feel the weapon’s effect before they obtain it. This will make the treasure feel more powerful, since they’ve already been on the receiving end.

N.b. As a GM, I generally require armour to be adjusted to fit players before they can comfortably use it, via a relatively simple crafting check and time, even when taken from a humanoid of the same size category. I'd probably allow something similar - with a more substantial crafting check if they decided they wanted a giant's armour.

Not the answer you're looking for? Browse other questions tagged equipment creature-size pathfinder-2e or ask your own question.

2
Equipment suitable for squads/members of a mercenary company?
11
Do creatures with inappropriately sized reach weapons threaten different areas?
3
Can a Half-Giant Soulknife manifest Mind Blades of the Large size category?
1
Is there a way to steal a Huge-sized weapon in combat?
10
Can I use Two Weapon fighting with Heavy weapons by being enlarged?
8
Where is chart for baseline physical ability scores by size?
9
Do larger creatures have advantages when grappling creatures of smaller size?
3
Are there (additional) guidelines for converting older editions' equipment to 5e?
1
How can a tiny-sized gunslinger increase the base die when we use houserules that favor larger creatures?