Does an aura affect all creatures including ones only partially in the aura?

In the image below, I have a paladin with a 10 foot aura of protection. I have three characters labelled 1, 2 and 3.

We have been playing that character 2 and 3 would be in the aura, but character 1 would not be. Is this correct? 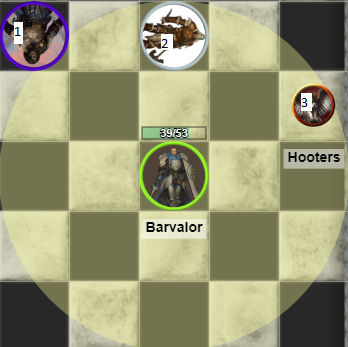 What the rules say

The "Areas of Effect" section of the Dungeon Master's Guide (DMG: page 251) states:

The area of effect of a spell, monster ability, or other feature must be translated onto squares or hexes to determine which potential targets are in the area and which aren't.

[...] If an area of effect is circular and covers at least half a square, it affects that square.

Thus, to answer your main question, an aura affects all creature fully covered and all those whose squares are at least 50% covered.

That said, there is another aspect to these rules that I believe should be considered:

What the rules say

Choose an intersection of squares or hexes as the point of origin of an area of effect, then follow its rules as normal. [...]

This explicitly applies to all areas of effect, even unusual ones like Paladin's Aura of Protection which states:

Starting at 6th level, whenever you or a friendly creature within 10 feet of you must make a saving throw, the creature gains a bonus to the saving throw equal to your Charisma modifier (with a minimum bonus of +1). [...]

I say this feature is "unusual" because it is not described like most spells since spells have a shape and a radius or side length. This instead is described as being "within 10 feet of you". So what exactly is "you"?

Interpretation 1: "you" is an intersection of squares

The DMG tells us that "you" must be an intersection of squares. I would assume this means an intersection of one (or more) of the squares you currently occupy (the rules don't actually state that this is the case). I would also assume that it moves with the caster maintaining its relative positioning (which the rules also don't state).

This is a bit of an odd thing to keep track of, what if the Paladin turns around or something? Well, 5e doesn't have facing rules (besides an optional one) so maybe the point or origin is maintained cardinally? If it "started" (as much as a permanent aura can start) in the north-west corner does it stay in the north-west corner? Can the Paladin ever change where the aura originates from? Maybe they choose a new point each time they regain consciousness? All things you'd have to consider since the rules do not say.

Answers to the following questions use/mention this viewpoint:

To quote the first:

Therefore, when playing on a grid, you select an intersection of squares as the point of origin. The rules then follow as if the spell had been cast on that intersection.

To quote the second:

Normally, effects that are described with a radius originate from a grid intersection. When the origin is defined by a creature, such as the caster of a spell, or as in this case, a creature reading a scroll, then the intersection is one of the intersections within or adjacent to that creature's space (the corner of their square for a Medium-sized creature).

Both of these support that a Paladin's Aura of Protection feature would extend, not from the caster themself, but from an intersection of one (or more) of the squares they occupy. This makes it just like most other areas of effect (spirit guardians is up for debate), but requires keeping track of relative positioning.

Interpretation 2: "you" is the edges of the squares you currently occupy

There is also the argument that the Aura of Protection overrules the DMG, that the area of effect does not extend from an intersection of squares but instead extends from you, the caster. Technically this could mean the physical caster, in which case you'll have to break out your measuring tape and figure out the exact dimensions of your character. I would question anybody who actually did that so let's just assume "you" refers to the (outer) edges of squares you occupy; this makes for much easier measurements.

Answers to the following questions use/mention this viewpoint:

To quote the first:

To quote the second:

The alternative interpretation is that the radius of the effect of a Scroll of Protection is supposed to be interpreted as a distance from the reader of the scroll, not a radius from a point in space. [...] this is also how a Paladin's Aura of Protection works. [...]

Both of these support that a Paladin's Aura of Protection feature would extend, not from an intersection of squares, but from the outer edges of the squares that a Paladin currently occupies. This removes any need to track relative positioning, but it also means an enlarged Paladin would have a bigger aura.

The second interpretation is the one I myself use and it also the one that lead rules designer Jeremy Crawford agrees with. He was asked to select between the following interpretations.

Aura of Protection/Courage extends 10 ft. all around. (None are correct, unless your circles are polygons.)

This agrees with interpretation 2 and, as far as I'm aware, is functionally identical to the image you originally posted which is a circle centered on the creature with a radius of 12.5 feet (or every point within 10 feet of the creature's base)

Not RAW, but not far off

The image you posted is not in line with this, as the aura originates from the center of a square. Also, its radius is actually 12.5 feet. (Note: this is how other games, like PF2, handle an aura or emanation, ie. starting from the edges of the character's square.)

So the paladin has to choose an intersection of the grid as the starting point of the aura. In the situation presented, if they would choose the upper right corner, the effect would cover #2 and #3, as you have been playing.

Not the answer you're looking for? Browse other questions tagged dnd-5e paladin area-of-effect battle-map aura .

23
Does a Paladin with Aura of Protection effectively get twice the Charisma save modifer?
9
Does 'Aura of Hate' also boost the damage of nearby hostile fiends and undead attacking you?
4
How does the Liberation Domain cleric's condition-suppressing aura from Freedom's Call work?
29
Does a Paladin's Aura of Protection Affect Allies' Death Saving Throws?
20
Does the paladin's Aura of Courage feature remove an existing frightened condition from a frightened ally who enters the aura?
8
Does cover protect against an aura if it only has a gap outside the aura?
5
Does the Fear spell work with an Oath of Conquest paladin's Aura of Conquest?
11
Do Paladin Auras of Differing Oaths Stack?
9
Does the Paladin's Aura of Protection affect only either her or ONE ally in range?
4
Does Aura of Warding give resistance to the damage of Shadow Blade?