Do Cobbler's Tools work on Horseshoes?

Xanathar's Guide to Everything greatly expands on the use of tools. Here are parts of the section on Cobbler's Tools (p. 80):

Although the cobbler’s trade might seem too humble for an adventurer, a good pair of boots will see a character across rugged wilderness and through deadly dungeons.

Components. Cobbler's tools consist of a hammer, an awl, a knife, a shoe stand, a cutter, spare leather, and thread.

Maintain Shoes. As part of a long rest, you can repair your companions' shoes. For the next 24 hours, up to six creatures of your choice who wear shoes you worked on can travel up to 10 hours a day without making saving throws to avoid exhaustion.

The book also expands on crafting an item as a downtime activity, and its requirements (p. 128):

A character needs to be proficient with the tools needed to craft an item and have access to the appropriate equipment.

If you are proficient in Cobbler's Tools, can its benefits (making both non-magical and magical shoes, maintaining shoes, etc.) also apply to Horseshoes? Or are shoes and horseshoes too different from one another?

A cobbler, by dictionary definition, works on shoes for humans. Traditionally, this would be primarily leather work.

Farriers do work on horseshoes. This used to involve both blacksmithing skills (to make the shoes) and skills for maintaining the animal's hooves. As such, smith's tools would be closest for horse shoeing in 5e. Certainly, if you really wanted to add this skill set, you could create a new set of tools with proficiency for farriers.

There is virtually no overlap in skills or tools between a cobbler and a farrier. Well, a cobbler does use a hammer, but certainly not in the same way.

The rules for Smith's Tools aren't very helpful but I would think that they would be the more directly beneficial toolset. The Wikipedia article on farriers includes this sentence:

A farrier combines some blacksmith's skills (fabricating, adapting, and adjusting metal shoes) with some veterinarian's skills (knowledge of the anatomy and physiology of the lower limb) to care for horses' feet.

If I were the DM, I would say that Smith's Tools matched up with this much more directly than Cobbler's Tools. The latter focus more on manipulating leather and fabric, stitching, and even a little woodwork. At least, that's what I can glean from looking in my shoe closet ;-P

A low-tech cobbler makes shoes for humans (and races with similar kinds of feet, in a fantasy setting), primarily out of leather. He also needs thread, some wood for making heels and lasts, dyes for colouring, waxes for polishing, and small nails for attaching heels to leather, and for giving smooth leather soles some grip.

A farrier makes shoes for horses (also ponies, mules, etc, and maybe centaurs in a fantasy world) out of bar iron. He needs a forge, anvil, and other blacksmith's tools to work iron. A cobbler doesn't do anything like that, and only needs a fire for keeping himself warm.

No. There is absolutely no way that the cobblers tools could be used to make horseshoes.

Horseshoes are made of metal, usually iron. The only listing I can find for horseshoes in the 5e books I possess is for the 2 magic items in the DMG, and both of those specifically say "iron."

Or are shoes and horseshoes too different from one another?

Here is a pic of some medieval-styled shoes that are similar to the illustrations of magical footwear in the DMG: 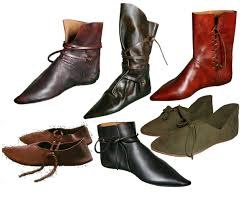 And here is a pic of a horseshoe for comparison: 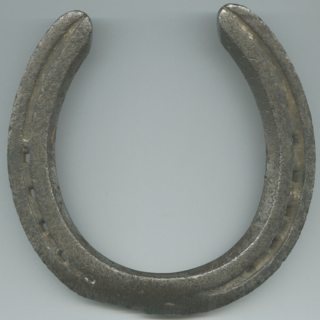 I don't think there is anything I can say in response to the question that shouldn't be obvious from looking at the items shown in these two images.

Funnily, horsehoes are a clear no (they are forged and fit). But hoof shoes (for sensitive bare hooves, used in a more temporary manner than horseshoes, or, more medieval, for masking tracks or silencing an approach) would reasonably fall into the domain of a competent cobbler. They would also work for protecting from injury from thorns (which horseshoes wouldn't work for as they only cover the rim of the hoof).

It depends what you are doing on the horseshoe.

To make and shape new custom horseshoes you would need a few additional tools not in the cobbler's tool set, not to mention a forge.

Specifically you would need a set of fine-work blacksmithing tools.

For simply working on an existing horseshoe, a set of cobbler's tools could work in a pinch. Simple on the road repairs to a horse's shoeing would utilize the same tools.

Still, the training is different, and only someone with a high aptitude could learn it without apprenticeship. The risk is also high, the person could injure the horse in the process by creating a split on the hove.

If I was a dungeon master and one of the players wanted to use their cobbler skills and tools to fix a horse's shoe, I'd run a rather tough series of skill tests.

First is a charisma test to show that the player can convince the horse to work on the shoe without getting a kick to the face. This would be followed by a combined Wisdom and Intelligence test for adaptive improvisational aptitude. Then I'd put a strong Dexterity test for the ability to figure out and execute the proper nailing techniques needed, and a Strength test to prove the person can actually handle the hammer on the harder surface of hoof.

Needless to say, failure on the first test induces injury to the player's character, critical failure would have the horse belt through injuring everyone in the party before running off leaving them without a horse.

Failure on the second or third test would result in the horse being injured by the process, inducing prolonged injury damage and bleed damage until they get to the next stable. Critical failure would result the player breaking their thumb, but not before splitting the hove at which the horse would then rampage injuring everyone and then leaving.

Failure on the final test would result in the shoe being half attached and having to remove the shoe before starting the process over. Critical failure results on the shoe falling on the players foot, injuring it, player screaming, startling the horse, and, well you know the rest.

Not the answer you're looking for? Browse other questions tagged dnd-5e equipment crafting .

12
Is there a limit on what tinker's tools can do?
2
Cooperative Crafting and Amazing Tools of Manufacture
3
When creating an item with artisan's tools, are there any additional requirements?
9
What ability do tools use?
11
Can a Druid Wild Shaped as a horse use Horseshoes of Speed?
5
How do tinker's tools interact with the ability to disarm traps?
8
Can a horse really travel over 65 miles per day, according to the rules?
2
Do magic items that are horseshoes only work with creatures that have four hooves?