Using the iPad as a GM-tool [closed]

Anyone have any experience using the iPad as a GM-ing tool?

Any apps that are particularly good for GMs?

I've used my iPad as a GMing tool. The game was D&D 4e, but I didn't use any of the 4e specific tools. I used Evernote to prep the game; I did all the prep work on my desktop, and it automatically synced to Evernote on my iPad. Evernote handles formatted text and graphics, so I could keep the stat blocks and dungeon maps handy. It also let me take notes easily during the game, which got synced back up into the cloud so I had 'em handy on my desktop for later prep work.

I also use it to play music while GMing. Assuming you're using the iPod app, you can start music and then switch to another app. The music won't stop.

Apps I haven't used for GMing, but which might come in handy: Numbers (very functional spreadsheet), Penultimate (freehand note taking app; doesn't allow for typing), and really any of the notetaker apps. I just like Evernote because of the syncing. I should probably mention Dicenomicon, which is the most sophisticated die rolling app out there. I personally feel like Dicenomicon is on the edge of having too sharp a learning curve, but it'll do anything you might want if you like electronic dice.

Since the iPad doesn't have quick application switching yet, it's a bit of a pain for me to use the myriad of single purpose apps. I don't want to be reading my notes, then swapping over to a dice roller, then swapping back to an initiative tracker. (Although I should note that A-Sharp's Dicebook reads PDFs and does simple die rolls at the same time.) That may change in the fall of 2010 when iOS 4 is released for the iPad.

The iPad's battery life is 9-10 hours; I've gotten that long out of it, so I'm confident that it'll last through a full session or even two convention sessions.

Finally, I really like the form factor. It's easy to pass a map graphic around the table using an iPad, and since it lies flat during the game, it doesn't form a barrier between me and my players. If you're using a GM screen, this won't matter to you as much, but if you like running screen-less, it's potentially more important.

Gnome Stew has a couple excellent posts that explore the iPad's potential in gaming.

There's a video, too, in Part 3, but it's just going over what was discussed in the other two parts.

I wanted to use it instead of a ton of rulebooks (using GoodReader) and found that I was missing a way to quickly bookmark and jump to pages I needed while gaming and that while it was possible to find stuff in the book the opening of books and typing the search term and all that was taking way too much time. I ended up using the printed books after a while.

At some point I was feeling like I had a tiny desk to work upon but in return I had the useless ability of stacking hundreds of books on top of each other.

The one thing that really works is looking up stuff on our campaign wiki. People, locales, past session reports, it's all there if we have a question, and an iPad is much less intimidating than a notebook.

The single most important tool for me as a GM is OmniOutliner for iPad. I keep all of my campaign notes in a single OO file. It is particularly good for combining my prep notes with my "what actually happened during the session" notes.

The hierarchical approach makes it easy to flip back and see something that happened in a previous adventure. It's also handy because I can put notes for future events in, and if necessary pull them into a current adventure as a block.

If you're a Mac user, OO is particularly handy because you can sync between the Mac and iPad versions.

I used Trunk Notes for all campaign information. As a Wiki, I find its perfectly suited for less linear campaigns. In addition, I find it has the best table-features of the personal wikis I tested for iPad. Trunk Notes has excellent dropbox sync, and in WLAN mode, I can edit my Campaign Wiki from any webbrowser.

I make a PDF for every encounter with all the monsters and traps. I copy-paste the Monsters from the Monster Builder and Traps from the Compendium into OmniGraffle and view them during the session in GoodReader. With the iPad 3, I find that I can put all monsters onto a single page and its still easily readable and usable during combat.

There's still a use for pen and paper

For all status stuff, monster HPs, combat info and notes, I still use pen and paper, as I don't want to be distracted by getting information into the iPad during the session.

There are already a lot of good answers, but I'm going to throw these in to the pot as well:

I actually wrote a web based app with this in mind too. I haven't finished it off, but it is online. I was creating it as a GM tool specifically for iPad use. It's nowhere near done, but it's passable as a tool for me. Probably why I've slowed on writing more code for it. ;) I have left it accessible to anyone that finds it though. The picture should give you some clue to how it would be used in game. It's a little funky to set up, but I didn't spend a ton of time developing it either. 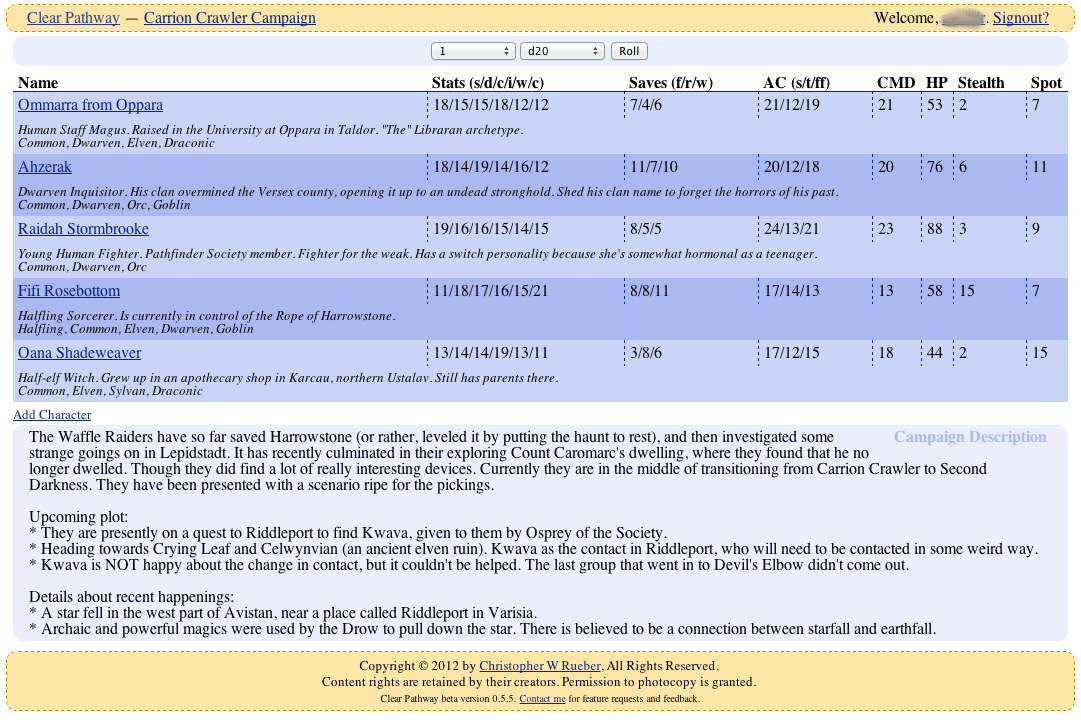 Not the answer you're looking for? Browse other questions tagged tools or ask your own question.

5
What is the name of this specific, online DM (4e) tool?
40
What's the purpose of the same page tool?
26
Why is it a bad idea to use Same Page Tool as a survey?
3
How can I write custom attribute value rules for the GURPS Character Sheet tool?