For anydice.com, is there a way to set a total number for three rolls?

I am very, very new to writing code and working on designing a RPG. As part of that, I am trying to do a simulation of three weighted dice rolls, ranging from 1-12 where I set the limit of how much the total of all three rolls can be. Meaning, I want to limit the total that any set of three rolls can give me to 12.

I am interested in the actual results of the dice and not just their sum so 3/3/3 is different from 4/4/1.

If the sum of the dice would be above 12 then the die making it go above 12 would be rerolled until this is not the case.

I have the dice weighted according to the percentages I need. I just have no idea how to do the language to limit the total.

Here's what I have thus far:

Any help would be GREATLY appreciated!

statistics anydice
Share
Improve this question
edited May 25 '20 at 17:57

Don't use dice for this

Your probability distribution is unnecessarily complicated. There's no way that you are going to be able to make its function clear via dice for tabletop play-- you are going to need a computer or a deck of cards or something. Your base distribution looks like it would be most simply implemented by doing something like roll 2d3 and if both are 3 then you get a 4+d4 instead unless you roll a 4 then you get a 7+d5. That takes a really long time for something that could basically just be roll 2d3, 3s explode. If the level of precision you are going for is important, you should already know the probability distribution because the only reason to use such a screwed up, complicated, lengthy, and difficult to implement random number generation system is precisely because it best implements some desired set of probability curves.

Since you don't know the probability distribution, you must not have come up with this system for such a purpose. Use a simpler generation system for your game. If you want it to cap at 12 and follow a similar curve, use 2d3 where each 3 can explode exactly once. That looks like this. Or, if the minimum of 3 is also important, roll 3d2 with each exploding maximum of once instead.

What you might be looking for is the empty die trick for rejecting "impossible" outcomes (i.e. results that you'll always reroll until they don't happen).

For example, here's how to model a mechanic where you roll 3d12 and reroll them all if the result is over 12:

The magic happens on the line if SUM > MAX { result: d{} }; if this condition is true, the function stops and returns the "empty die" d{}, which AnyDice will completely ignore when collecting the results. The end result is exactly as if you were to reroll any rolls that match the condition until they no longer do.

In the rest of the function, you can then calculate whatever result you want based on the input ROLL and return it. Note that the return value needs to be a number (or a die); if we tried to return a sequence (such as ROLL itself), AnyDice would just automatically sum it. In the example program above I just return the sum, but one possible alternative (if you wanted to examine the values of the individual dice) would be to encode the sequence ROLL as a base-10 or base-100 number, e.g. like this:

(Here's a more generic helper function to do this if you want one.)

I used an normal d12 for the example above, but obviously you could also use a custom biased die if you wanted. And you could also implement something like your "roll one die at a time and reroll last if over 12" mechanic, it would just be more complicated and/or tedious.

Note that, in this example, I'm rerolling the most recent die if the roll plus the base total so far plus the number of remaining dice to roll exceeds the maximum. That's because we know that the remaining dice will always roll at least 1 each anyway. So, for example, if we rolled an 11 on the first d12 out of three when the maximum was 12, we'd reroll it since we'd know that the following two rolls would have to each increase the total by at least 1, making it at least 11 + 1 + 1 = 13.

You may need to add a user-defined function.

Don't use anydice for this

Once you get into certain types of rolls, especially ones where you might (theoretically) have infinite re-rolls and/or where what to do with a roll depends very on other rolls, Anydice isn't up for the job. Monte-Carlo simulations are going to be the most broadly applicable tool to solve the distributions of strange rolls like this. It's not too complicated either, all you really need to do is convert your algorithm into code. The basic steps:

In this case I did it in python (code below), with 100 000 rolls and plotted the frequency of each result for each roll: 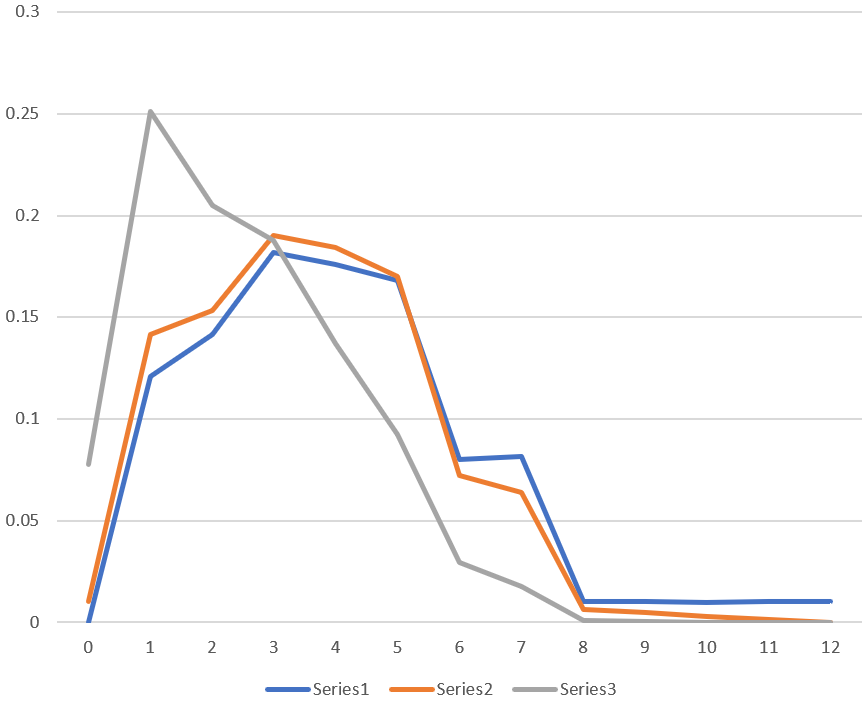 If you wanted to, you could modify the below distribution to measure how many times you would have to reroll etc.

The first shows the total of the dice as a number from 2 to 12. The second breaks out each die to give a result of XYZ where X is the highest die, Y is the middle and Z is the lowest - the range of the lowest die depends on the values of the other two.

4
What is the average outcome of this opposed roll resolution mechanic?
5
AnyDice Help: ORE-Like Resolution
33
How many rolls does it take to get to six coins?
8
Odds for dice pool with exploding dice
5
Modelling opposed dice pools with a swap
10
How can I calculate the sum of 2 random dice out of a 3d6 pool in AnyDice?
2
AnyDice: Sum of dice pool + highest value from the same roll
26
What is the ideal way of emulating a full dice set using a single d20?
3
Disadvantage/adversity dice pool mechanic that knocks dice greater than 1 out of the pool and adds 1s to it
4
Modeling a system where you roll Xd20 and take highest, plus the second highest if the first one is a critical, etc