Is there some monster that works like a swarm of bodies?

I want to ask whether somebody has designed a monster that works like a swarm of bodies. Not undead but simply human, dwarf, etc. bodies that are corrupted or something similar. I want this monster to work like a swarm in such a way that it can move like a flow until push and destroy windows or doors of a house.

Something without Intelligence, like a horde that kills everything. The monster must be easy to hit for players, but after having killed one body, another is ready. In my mind this swarm is made of singular bodies with someone that is able to fuse with another to create a terrifing tangle.

If you wanted to make them corrupted humanoids you could use one of your choice as the base creature to apply the template to, or take a standard humanoid and apply another template (e.g. the corrupted template from Book of Vile Darkness p. 186) to it in addition to the mob template.

Alternatively if undead are ok then the corpse gatherer from Monster Manual II p. 51 would probably do the trick.

A corpse gatherer is an animated graveyard empowered by a mean intelligence and a greed for more bodies. It exists only to increase its own size and power by devouring more dead bodies. 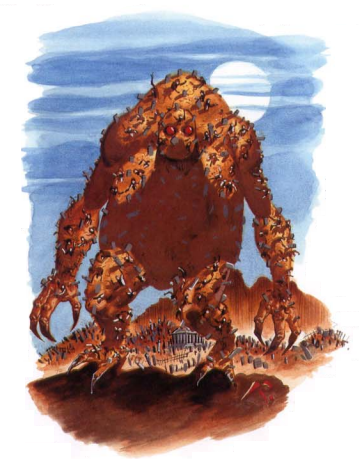 If you are looking for something along the lines of the rabid swarms in World War Z, generate a single level commoner or similar creature with moderate hit points (I believe the average for a Human is 3) adjust them as though they were a member of a swarm.

Decide how many members are in the swarm and multiply the number of members by your average component creature (in the above example: for a swarm of 100 commoners your hit point total is 300). Give them the Mindless special quality which covers them being directed by the swarm host (as you've indicated) and makes them immune to critical attacks since what you are actually stating at this point is a Human Swarm thus the death of individual components of the swarm don't affect the actual swarm unless significantly reduced (i.e.: if your human swarm with 400 hit points is reduced by AoE spells or other attacks to 30 hit points you no longer have a swarm but 10 mentally challenged humans with a shared goal).

As far as attacks are concerned all swarms have a single attack and the inability to make attacks of opportunity and that's mostly there to streamline the combat round. Doing attacks of opportunity for 300 members of a human swarm would get extremely laborious and time consuming. Instead give your human swarm host the feat Trample, use the swarm as their mount and use the overrun attack option. Adjust the size of your Host's "mount" in accordance with the number of components in the swarm. Under the standard description for Insect swarms indicates 300 Tiny creatures in a Swarm becomes a medium sized stat creature. Scaling up 300 humans increases them from Medium to Huge and would thus get a +8 to hit on this attack against a medium sized target (+4 for each size category larger than the target). If your Swarm Host succeeds in the overrun attempt the defender is knocked prone. Thereafter you can rule that a defender in this situation is affected as though by an effect similar to Improved Grab so long as they are unable to escape the trample effect of the swarm they suffer damage from the swarm.

As far as Damage is concerned to simplify your die rolling set it to 1D6 (standard damage for medium creature slam attack) because individual components of the swarm aren't using weapons and feats to modify their attacks but add 8 to damage as a bonus due to the swarm size (this bonus for size is an effective way to stat multiple creatures running over the defender) and you should end approximately where you want to be for your human swarm. This may not seem like a lot of damage but when you consider doing approximately 11 points of damage (1d6 average roll is 3 + 8 for the size modifier) automatically each round as a swarm of 300 humans trample over your defender for however many rounds that will take and it's starts looking a bit more accurate.

To give your player's hope to survive getting trampled have them make a fortitude save at base 11 (or whatever the average damage would be) per round and increase the target save by one per round they are being trampled to take half damage. So on round one the target number of the save is 11, the next round it's 12, etc.

Not the answer you're looking for? Browse other questions tagged dnd-3.5e monsters swarm or ask your own question.

35
How can I keep my campaign challenging when dealing with players of vastly different skill levels?
10
How should I handle a PC's pack of animals?
14
Must the body remain on the Material Plane during astral projection?
4
Advancing a monster with spell-like abilities
8
Is the Create Crawling Claw spell valid in v3.5?
15
Can reach weapons attack and receive attacks of opportunity with an ally in the way?
11
Obtaining trap sense without class levels?
23
How can I handle a Colossal monster?
6
Is there an inexpensive general way to make items forever immune to energy damage?