How do I determine the proper bonuses for my attack and damage rolls?

The description of the weapon says I get +5 to both hit and damage rolls, but on dndbeyond it says I have +6 to hit and 2d8+6 for damage. My DM said that the regular damage for this weapon is 2d8.

I'm very confused where dndbeyond is getting the bonuses of +6 from.

Additionally, I am wondering if I should manually add in the +5 to hit from the description or if it is already included?

https://www.dndbeyond.com/profile/yompog/characters/28500037 that's my link, idk if that works for others. This is for dnd 5e .

I do not have proficiency with guns, although the DM has stated that for the sake of the story I am automatically able to use the gun to its fullest potential. The equivalent story-related thing closest to gun proficiency is that it requires attunement.

The description of your magic weapon, Demon of Powder says:

You gain a +5 bonus to attack and damage rolls made with this magic weapon.

So we are up to a +5 bonus to your attack roll and +5 to your damage roll.

From the rules for making an attack, we have two things that come into play:

From the linked character sheet, it does not appear that you have proficiency with firearms or the Demon of Powder, so we do not add your proficiency bonus to attack rolls.

From the rules for Damage rolls,

I'm not seeing anything else on your character sheet that would modify these numbers, so your attacks with Demon of Powder should be +10 to hit with 2d8+10 damage.

It appears as though Demon of Powder is not a publicly available homebrew item on DND Beyond, so I can't tell you why the numbers appear different than expected. But you can adjust the numbers by customizing the "To Hit Bonus" and "Damage Bonus" in the customization option for actions on your character sheet.

Based on the numbers DND Beyond is currently displaying, these settings should correct it: 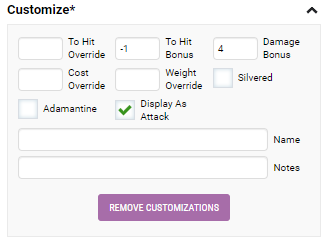 Not the answer you're looking for? Browse other questions tagged dnd-5e attack ranged-attack dnd-beyond or ask your own question.

32
How do I figure the dice and bonuses for attack rolls and damage rolls?
7
Can a warlock with the UA Moon Bow invocation use the created bow to fire magic ammunition?
11
What is my attack bonus and damage bonus with Shillelagh?
8
Does the spell Swift Quiver RAW only apply to bows/arrows?
8
If I cast Hail of Thorns and then Conjure Volley, would the effect of Hail of Thorns apply to the duplicate arrows created by Conjure Volley?
6
Do spells/abilities that do extra damage on a weapon attack apply to the damage of Steel Wind Strike?
3
How does the UA 2019 artificer's Reloading Weapon infusion affect Matt Mercer's Gunslinger firearms?
11
What is the weapon attack damage of a tentacle rod?
8
Does the Blood Spear require attunement to gain the +2 bonus to attack and damage rolls?