Are there glider rules in Shadowrun 4E?

This is a short one, but I'm confused about it. Arsenal, on p112 lists two gliders, the Artemis Dawnglider and the Moonlight Phoenix. Unfriendly Skies adds the Artemis Nightwing on p14.

All gliders seems a lot less expensive than other aircraft (less than ¥20K), even though not really fast, and not a lot of cargo/passenger space. But still, pretty good for the price.

And as with everything that's too good to be true, I'm wondering: what's the trick? I couldn't find any rule in any book regarding gliders, does it mean they behave exactly as your usual aircraft? Specifically, does it use the same take-off / landing rules? Or does it have to take off from a high point, or even from another plane?

It seems a glider should behave differently than a normal plane, but I can't find it anywhere in the books. Thanks for the help!

flight shadowrun-sr4 vehicles
Share
Improve this question
edited May 23, 2021 at 9:53

Mind you, this answer is not grounded in the SR4 rules - I haven't played SR since 1E - but I've flow some gliders.

The key element of a glider is (usually, but not always) the lack of an engine. Most gliders have a 15:1 or better glide ratio - that is, for every 15m forward, it drops by 1m. This is usually at the cruising speed, and going faster doesn't actually improve it much, but going slower can lower it a lot. 30:1 for high performance sailplanes, and up to 65:1 for the highest performance ones. It's likely that a cargo glider would be getting near 40:1 when near empty, and 20:1 when totally filled, but you can easily increase those numbers for game purposes. (For comparison, a Cessna 172 is about 7.2:1 with the engine off, and the 747 has a peak of 17.7:1. cite) Note that hang gliders run typically in the 15:1 to 22:1 ratio at present.

Now, I mentioned before that not all gliders are unpowered. Some models have folding propellers, and at least 2 models have used rocket-powered launch, 3 if you count the Space Shuttle. One experimental I've seen used a motorcycle as it's ground launch (put it nose down to 90+ kts, then rotate, and hope to hit a thermal before the time you stall at 30 kts). Typically, a self-powered aircraft has enough fuel and motor to make it to about 350m (about 1000') on motor, and then glides at 20:1 or so from there.

Note also, turning does reduce the glide ratio. Not a lot, but it does.

By the rules, these gliders are just normal aircraft. A group of glider is just a subtype one could specialize in for the piloting skill. And all of those listed in the book have engines in their illustrations and reflected in the statblock. Mind you that the slowest glider is twice as fast as the Zeppelin. 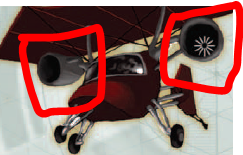 As a result of the engines, no special rules for gliding are needed - these vehicles can maintain level flight as long as the engine can run. What might make the term Glider instead of Ultralight applicable is, that under normal operation the engines are only operated for takeoff and gaining height, and in short bursts in between for an almost level flight.

Not the answer you're looking for? Browse other questions tagged flight shadowrun-sr4 vehicles .

26
Are there any official guidelines for Shadowrun payouts?
18
Since there are actually Trolls in Shadowrun, is there another word used for "Trolling" a forum?
14
How to deal with intimidating amount of rules in Shadowrun
5
Things that all characters are vulnerable to in Shadowrun?
10
Is there a google earth style map for Shadowrun 2050?
3
Are there any rules for spaceships in D20?
5
Are 4th Edition Shadowrun adventures compatible with 5th Edition?
4
Where are the Cybertorso rules?
7
Are there published airship rules for AD&D?