Can you flank from above?

If a character is on top of a creature, does this count for flanking?

Context: a group I play in was killing a dragon, and one of my fellow players (a fighter) grappled it and hung on to its neck. One of the other fighters stabbed it on her next turn, and the DM was unsure whether the dragon was flanked or not. Eventually, he said that sure, it was flanked, because technically there was a straight line drawn between the two characters. This group runs pretty heavily on RAF (as evidenced by the polymorph incidents), so this isn’t a “was this right” question. The decision worked for us, but I was curious about what RAW says on it.

Clarification: on top of, in this case, meant that the first character was sitting on the dragon’s neck, hanging on for dear life. He was on top of the middle square of the dragon, we decided.

Strictly RAW, using the optional flanking rules from the DMG, this would not qualify for flanking.

When a creature and at least one of its allies are adjacent to an enemy and on opposite sides or corners of the enemy’s space, they flank that enemy [...]

When in doubt about whether two creatures flank an enemy on a grid, trace an imaginary line between the centers of the creatures’ spaces. If the line passes through opposite sides or corners of the enemy’s space, the enemy is flanked.

It's unclear exactly what you mean by "on top of", so I've illustrated a few scenarios, including what is required for flanking. To be clear, the rules here are written in the context of two dimensions, so there is going to be some sense of "it's up to the DM" when applying to three dimensions, but as written, the rules can be applied in the same way when transitioning to a three dimensional context.

Here are three conceivable scenarios in two dimensions. In the first, we assume a character is literally on top of and sharing the space with the dragon; note, no matter where our ally outside the dragon's space goes can give us two points of intersection with the sides of the dragons space. In the second, the grappling character (center) is not on an opposite side from his allies. The third shows what is necessary for flanking.

Now, if we do permit flanking rules to apply in 3 dimensions, we still do not satisfy the necessary conditions: the imaginary line does not pass through opposite sides of the dragon's space. 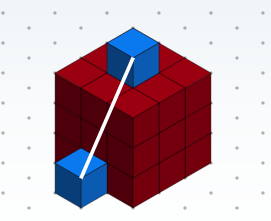 And a side view of this scenario: 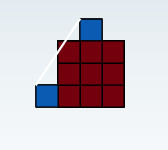 So what is necessary to get flanking with your ally that is literally on top of the dragon?

The dragon needs to fly up 5 feet and you ally needs to run up under the dragon, so that we have this scenario (side view of 3d):

Notice here that the line passes through the top and bottom of the dragon's space, and we have the "opposite sides" as required by the flanking rules.

Not the answer you're looking for? Browse other questions tagged dnd-5e combat battle-map flanking 3d-space or ask your own question.

5
Is it really this easy for a rogue to flank?
3
Is a tiny creature with the feat Blades Above And Below able to flank?
25
Can I flank with an invisible ally?
8
Can you flank with a reach weapon?
7
Can characters attack flank squares without turning?
25
Is it impossible to flank a large creature on a hex grid?
6
Can two Large (or larger) creatures flank two Medium creatures who might split attention?
4
Does the Stirge blood drain allow it to flank as well?
5
Can multiple castings of the Reverse Gravity spell be used to lift the same target(s) several hundred feet?
4
Does the Wall of Fire spell damage creatures above it?