Disclaimer: This has nothing to do with backgrounds from D&D 5e.

It happens a lot that the story you create for your character sometimes is not well aligned with what happens afterwards in-game. If you are a Lvl 1 Warrior you maybe can say you fought in the frontlines of a bloody war, and now are a retired mercenary.

Then you end-up losing to a bunch of rats the GM threw your way because the ceiling was too low and you forgot your matches.

What I want to know: is there a table/resource that has some indicator of what you may have accomplished when creating a character of a specific level?

That way I won't embarrass myself narrating when I defeated a lich in my Lvl3 Ranger backstory, just to be inmediately destroyed by two goblins and their pet wolf in my first encounter.

I don't mind D&D/Pathfinder responses, even when the power level may differ between the two, and even between versions. I'm more interested if the resource itself exists, or how to create one.

What you're asking for wouldn't begin to cover the options players may want for their characters.

However, there is an easy solution. Pathfinder creatures that are not directly related to Paizo's Golarion story are mostly listed in as srd content. Looking around your level, or slightly higher, you could find something that your character could realistically have done.

Second, remember that little gets done by one creature by itself. Writing in former allies can be a fun tool for your GM that allows you to round out your story, perhaps with a more epic encounter.

Not all characters have to have survived some harrowing experience

That's about it. You don't have to be an orphan. You don't have to have defeated a Lich (typically a CR 12 encounter), or survived a war. If you're level 1, you're barely better than an NPC. By level 3, you stand out in a crowd of adventurers. Practice writing more interesting things about a person who would want to engage in a war or slay a lich. Save the heroics for someone whose level justifies it.

You are confusing story with game mechanics

Level is a game mechanic, it's there to offer you progression in the game, and give you something to keep playing the game. The story is an entirely different thing, and those two don't have to be related.

As a DM, I could easily make a lich NPC that a level 3 ranger can defeat. Would it be a very impressive lich? Not from a game perspective, but that's hardly the point.

If you stretch the game mechanics enough, everything comes tumbling down. The average commoner has a decent chance at getting killed by a housecat, you can fall from orbit and if you have 121 HP, you are guaranteed to survive without so much as a single broken bone, and a level 10 barbarian could let a guy stab him with a sword for several minutes and wouldn't even break a sweat. None of this is meant to be realistic, it's a game, with abstractions to make gameplay more fun and fluid. Why are NPCs afraid of Orcish when that Grizzled Mercenary NPC from the inn could easily kill all the orcs by himself?

If your DM and the rest of the party is okay with your warrior being a veteran from a bloody war, or your ranger having killed a lich, you don't have to try and justify why you couldn't now take on a stock lich. It doesn't matter.

Besides, I doubt such a thing would even be possible to make, because what you could realistically kill depends entirely on your build and your items. One level 10 ranger might be able to take on a lich with some gimmicky items, while a level 15 ranger might get butchered because he's got the wrong build, or he happened to have 100 instead of 101 HP when the lich cast power word kill.

The only official advice on this is to come up with whatever you want for your character's past life before adventuring, as if level were somehow not related to that. Obviously, as you note, that makes for some very jarring ludonarative dissonance, especially at low levels. In my experience, a combination of level and tier help to inform what sorts of backstories make sense. It is notable that age does not inform what backstories will work-- choosing any race that lives multiple decades, even humans, and paying attention to how long your life up to this point should be is usually a recipe for more dissonance. Here's what I do: 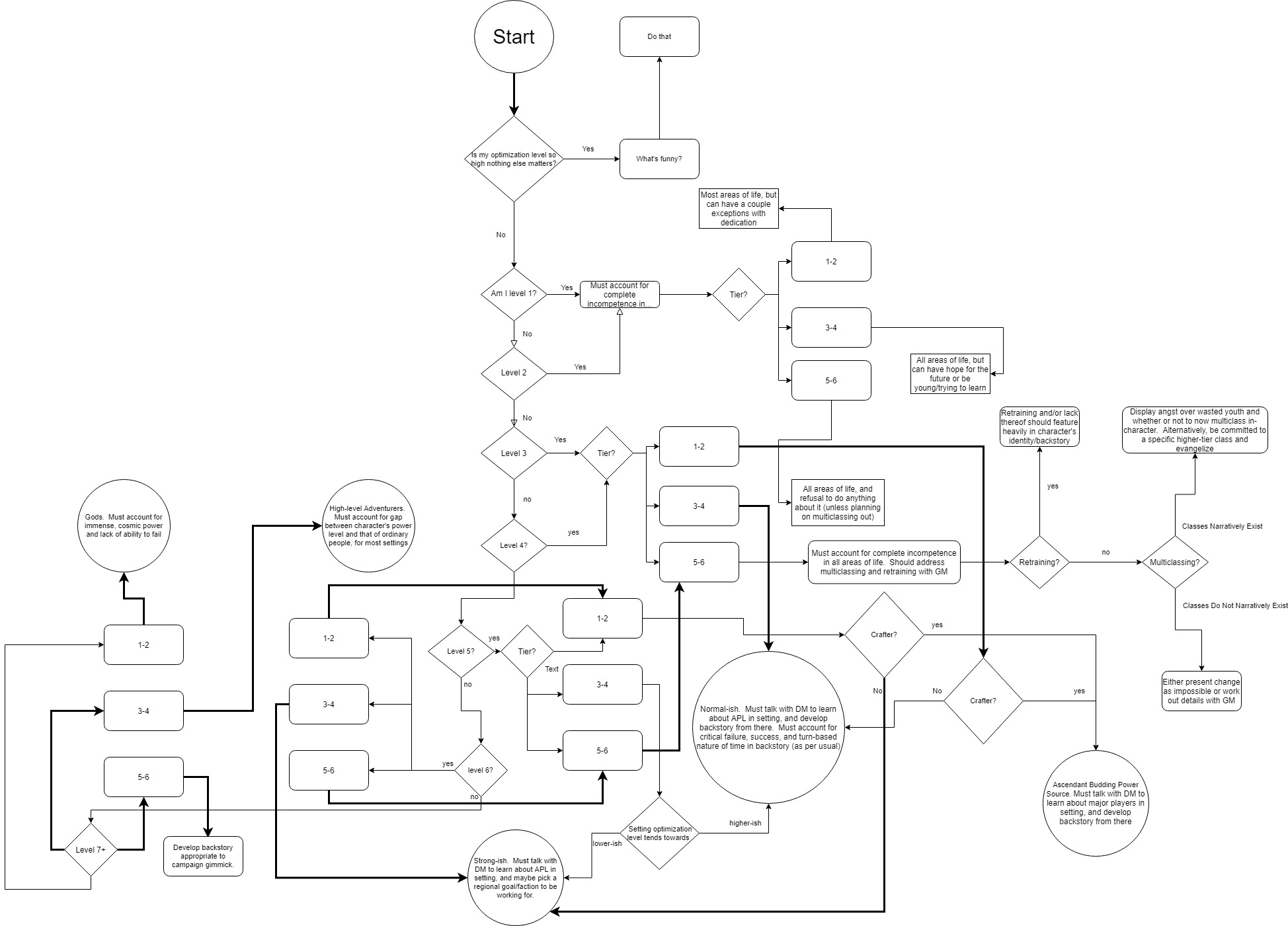 Disclaimer: flowchart is an attempt to codify what I do, not what I do itself; that is, I just made and do not ordinarily follow a flowchart, but I do go through this series of important level-and-tier-based decision points when designing a character. Note that the chart assumes the world is roughly in line power-and-power-distribution-wise with those described by the DMG for 3.5 or the setting guides for Pathfinder (which are roughly equivalent). Furthermore, the chart assumes a backstory has not been provided to you by the DM or other external source.

I know of no such resource, nor does one seem especially valuable to me

This is a frame challenge: an acceptable backstory for a given character is one that you personally find satisfying, not one that is declared by an outside source. They key theme of this answer is that backgrounds (as the term is used in the question) are generally thematic and vague, and can be intuitively constrained by starting level.

Using the example in the question, a Warrior was previously a frontline soldier in a bloody war and then became a mercenary who subsequently retired from mercenary life. But let's think about what, precisely, this character history means:

A frontline soldier in a loosely Medieval-themed setting is not a legendary adventurer. A frontline soldier probably knows a decent amount about formations and staying in their place within one alongside their comrades. Fighting shoulder-to-shoulder with other trained, professional soldiers is a very different circumstance to fighting a swarm of rats with a couple of random party members that have not practiced working as an effective team. A frontline soldier was almost certainly not trained to be a highly competent solo combatant, no matter what the war was like. That sort of training is expensive and time consuming, and frontline soldiers can't use it (maintaining a line may be important, for example), may not survive long enough for the investment to pay off, or both.

Without the rest of their military unit, the logistical support of the entire army, and the guiding decisions of their commanders, the character's military experience will be hard to apply. Their fighting experience, while not worthless, doesn't really give them much advantage in mechanical terms related to the Warrior class. This applies to the mercenary work as well. While the difference between the character history and character's current ability may feel jarring, there is no obvious reason that they can't both be accurate.

For some backstories you may have to tone down the awesomeness to justify a PC's abilities in play. If a PC was a professional soldier for 40 years, but is a level 1 Warrior, they probably weren't a very capable soldier during their career. Maybe they were a lazy and sloppy soldier, or maybe they served in a non-combat role such as a quartermaster, or anything else you can devise.

There may be cases in which the backstory is simply too difficult to square with a low-level PC's capabilities. In such a case, if the mismatch bothers you, either the backstory needs changing to one that you find satisfying (not one that is listed in some table as generically satisfying), or the PC needs to enter play at a higher level. For example, a champion swordfighter who was the best in the kingdom for two decades is just not a level 1 character. A backstory which requires an already-amazing PC simply does not mesh naturally with a low-capability PC.

You can cheat around this a bit ("I was cursed, and lost most of my combat ability, but I'm ready to start adventuring again from the ground up!"). Luck is a factor that can be spammed here as well: a couple of strokes of good luck at the right moments can allow a PC to have punched above their weight, while one bit of bad luck at the wrong time can be the end of anyone at all (forgetting your matches while in a lightless cavern is a big problem, and I doubt that anything in their martial history taught your Warrior to fight swarms of things while crawling and totally blind).

My single, general-case guideline is a meta-idea: a PC's past accomplishments should be far less impressive than what they will accomplish over the course of the game. Backstories cost no resources and carry no risk, so it's easy to declare that your character used to be amazing, whether or not they still are. This process is fundamentally different from actually applying game mechanics and relying on dice rolls during play. It's apples and oranges, and there is no reason to assume they will or should automatically line up.

If the background is generic (like "they were a soldier"), you have enough vagueness to find ways for the background to be true but not indicate a powerful adventurer.

If it's really specific, like defeating a lich prior to reaching level 1, you should work out how such a thing might have been done with no class levels. If you can work out a reasonable enough way it could have happened, then you have a consistent backstory. If you can't, then you'll have to either live with the mismatch or accept that it's not a suitable backstory for this character.

I don't know of any mechanism that will definitely combine two totally different things in a way that you will find plausible and palatable.

Not the answer you're looking for? Browse other questions tagged pathfinder-1e dungeons-and-dragons background .

15
Fleshing out a background and roleplaying it
2
Looking for background material about the Midgard Derwisch
6
Is there an engineering background?
11
Is there some sort of official assassin background?
3
Soldier Background - Military Rank & Specialty (PHB 140)
9
Does using your Criminal Contact background feature require a roll?