The spell druid grove (XGtE, pg. 154) lists several effects that the caster may impose on the spell's area (30-90 ft. cube). The spell also comes with an "Additional Spell Effect"; this reads:

You can place your choice of one of the following magical effects within the warded area:

So you select one of these spell effects and choose the location of its point of origin within the druid grove area.

The each spell's listed area of effect can easily extend beyond the boundaries of the druid grove, especially if you only create a 30 foot cube grove.

Can the area of effect of the additional spell effect extend beyond the boundaries of the grove, or does the grove restrict the spell's listed area?

As an example see this diagram. Here we have a 30 by 30 foot druid grove, and a 20 foot radius spike growth centered at the center of the grove: 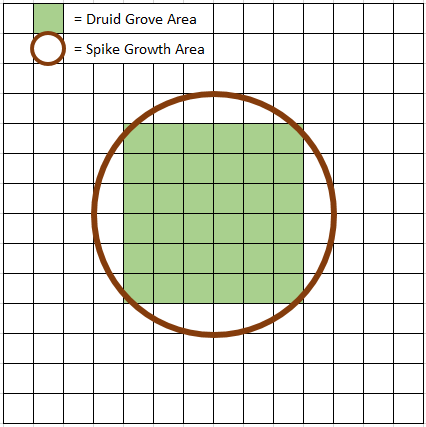 Does such an arrangement work? Or must the spike growth be confined to the 30 x 30 foot area of the grove?

The spike growth effect must be within the druid grove area; it's unclear whether it must be entirely within the area

[...] A dispel magic cast on the area, if successful, removes only one of the following effects, not the entire area. [...]

[...] You can place your choice of one of the following magical effects within the warded area: [...]

From the first quote we can conclude that "the area" refers to the actual grove itself not the various effects of the spell. Thus we know that the effects (including the additional spell effects) are created within the area. We also know from the fourth quote that these effects are placed within the area. What we do not know is whether "the effect" means the point-of-origin or the entire effect. I could see a GM using either interpretation.

My own personal thoughts

While the spike growth might be inside the druid grove it also goes outside the grove. It would be meeting a technical requirement because the spell did not include the word "entirely" but I wouldn't allow it to be placed in such a way.

33
Is Thunderwave centered on the caster?
13
Who does Faerie Fire affect?
8
Does the area of the Spike Growth spell work around corners or through total cover?
5
How does orienting a cube-shaped spell work in three-dimensional space?
1
Is this random area of effect spell deviation house rule broken?
9
Does the Hallow spell remove an existing charm/fear/possession effect from creatures that are already in its area when the spell is cast?
8
What is the point of origin for a square area of effect?
8
What is the point of the "Grasping Undergrowth" effect of the spell Druid Grove?
2
What counts as a "specific effect" of the Guards and Wards spell if the Dispel Magic spell is cast on it?