Are there symbols representing the Feywild, the Shadowfell and elemental planes?

Are there symbols representing the Feywild, the Shadowfell and elemental planes (of Air, Fire, Earth and Water)? The player’s handbook of the 5th edition contains symbols for outer planes, are there symbols that represent the above planes of existence?

The symbol of the Feywild is of top interest. Perhaps there are any text descriptions?

It seems there are no universal symbols.

The Manual of the Planes from 3.5 edition includes info on Astral Color Pools on page 48:

A number of openings known as color pools connect the Astral Plane to other planes. Color pools are irregular disks of a particular color floating in the vastness of the Astral Plane. The color of the pool tells the astral traveler what plane is on the other end of the color pool.

There is a parallel for the Ethereal Plane, too (as per page 56:

Ethereal curtains function like the color pools of the Astral Plane, but they always turn travelers solid when they reach the destination plane

This suggests there is a color theme related to various planes (or, at least, their connecting curtains/pools if not the planes themselves) but as for a specific logo identity or brand for each plane, there is no such indication. All the illustrations are used to try and map out the conceptual relationship of their positions and connections and I could not find where any specific graphic mark is mentioned.

Going further back, to the Planeswalker's Handbook from 2nd edition, we see that the planes are represented thematically. 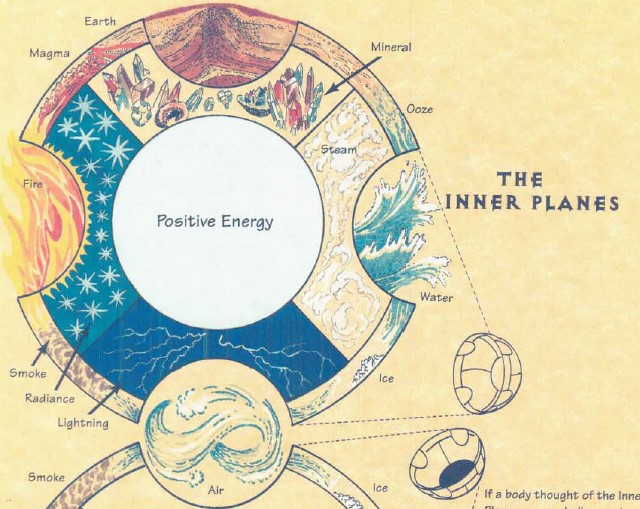 There is an illustration on Page 7 of the Planeswalker's Handbook that shows a few sketches representing the various planes but there is no text accompanying text confirming or describing the illustration represents anything other than one person/character's choice of representation: 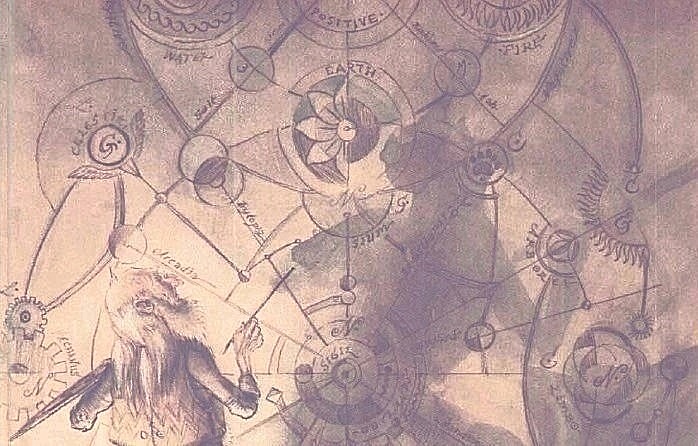 On page 105 of the TSR supplement Planes of Chaos, we find the elements (not the planes) represented thusly: 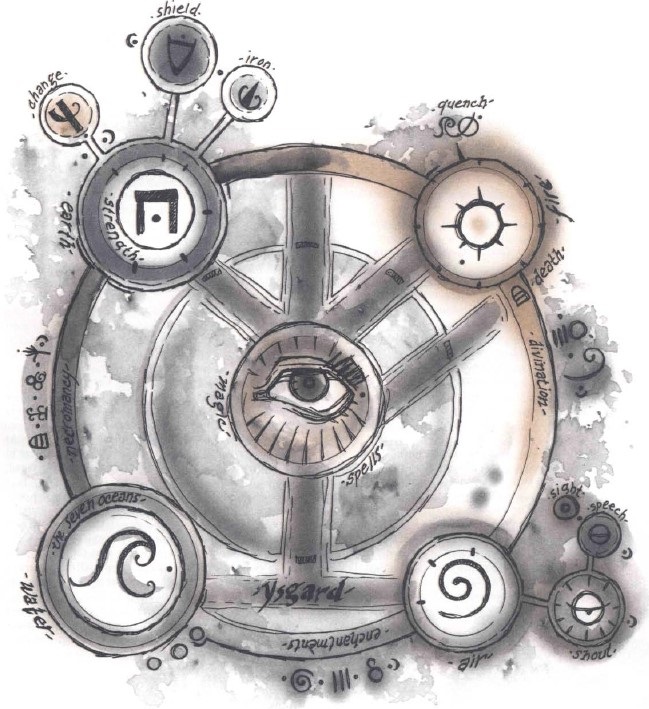 There are a ton of glyphs here but it's critical to note that this illustration pertains not to the elemental planes but to the elements themselves. The illustration is used in conjunction with the description of how the gods, planes, and elements are intertwined so it's conceivable that some of the glyphs would be used to refer to both the element and its corresponding plane.

Here it's worth pointing out that the Planes of Chaos approaches the lore from the Norse mythology so the symbols it features would not be used by, say, the denizens of a given plane or, say, elves who use a different script.

It then seems to me that, aside from a potential color code given by their connections, representing the planes is left to the imagination of whoever is referencing them and is no doubt informed by that individual's culture. Based on the examples above, though, it would seem that certain general imagery (eg flames representing the plane of fire) is likely common.

Not the answer you're looking for? Browse other questions tagged dungeons-and-dragons planes art planescape feywild .

4
Can there be portals in the Astral Plane that lead to the Elemental Planes?

13
Are there no more elemental planes in 4th Edition?
10
How can the positive/negative planes be described?
13
Are there any lower-level means of travelling between planes of existence?
4
What planes of existence does everyone visit while sleeping according to the Great Wheel cosmology?
8
Are there any plant species that grow only in the Feywild?
8
What is the Elemental Chaos like?
7
Are there any elemental plane rules or details?
4
Can there be portals in the Astral Plane that lead to the Elemental Planes?
6
Does Astral Projection spell fail if cast while on the Elemental Planes or Material Echo Planes (Shadowfell, Feywild)?